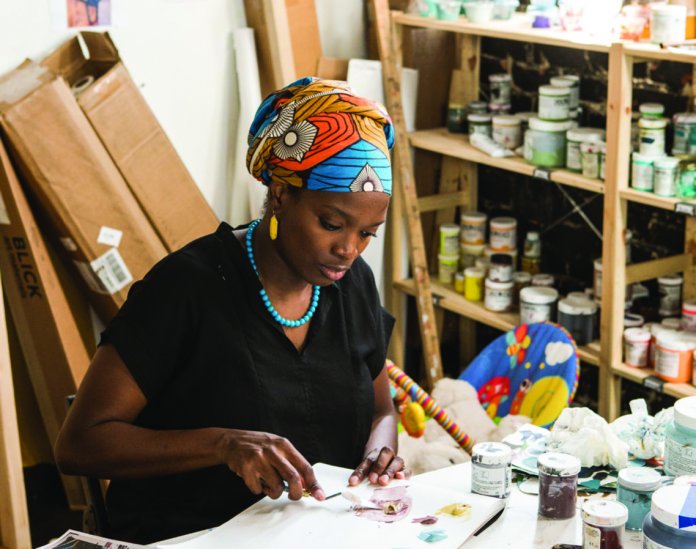 Njideka Akunyili-Crosby, daughter of the late Dora Akunyili, former Director-General of the National Agency for Food Administration and Control (NAFDAC), was on the front page in the United States for most of the week, following a visit to her studio by the former US First Lady. What was Michelle Obama up to? What have been the gains for Akunyili-Crosby known for vibrant paintings that weave together personal and cultural narratives drawn from her experience? Ferdinand Ekechukwu hunts for answers

A recent visit to Nigerian-born visual artist, Njideka Akunyili Crosby, by former US First Lady Michelle Obama is in a way resounding. The august visitor paid the Nigerian art intellect a visit in her studio last Saturday. While the real reason for Obama’s visit to Akunyili-Crosby remains one to be figured out, it is however not out of place and could pass for a courtesy or a symbolic gesture to the wave-making international artist. As first lady, Obama served as a role model for women.

The visit by the wife of former President Barrack Obama was shared on Instagram by Njideka’s equally famous sister, Chidiogo Akunyili Parr. With the photo of Mrs Obama hugging Njideka, Chidiogo wrote: “So this just happened! Casual Saturday in the Akunyili Crosby family. When the Michelle Obama pays a visit to your studio!  Me to my sister, “if it could come up, make sure to tell her about the book.”

Akunyili-Crosby is an artist based in Los Angeles and creates vibrant paintings that weave together personal and cultural narratives drawn from her experience.

Known for creating works that speak to the life of Africans who find themselves in the Diaspora for one reason or the other, more so for her unique style of painting – a balanced mix of African ethnics and Western standards. Akunyili Crosby made history in 2017 following her botanical painting, titled “Bush Babies”, which sold for $3.4 million USD in 2018 during an auction. Originally estimated to sell for up to $800,000 by New York-based art company dealer, Sotheby’s, the artwork ended up going for a $3.4 million. Since then, there has been a spike in the value of her paintings.

According to TIME magazine, Akunyili-Crosby’s works have sold for millions at auctions but in 2018, it was possible to see one at Los Angeles’ Museum of Contemporary Art free of charge. Her works could also be seen in her studio for free. Like many of her paintings, Akunyili-Crosby’s “Bush Babies” was inspired by her heritage, and draws from her own experiences as a Nigerian woman living in America for work. Born in Enugu, to a surgeon father J.C. Akunyili and Pharmacologist mother – the late Ms. Dora Akunyili —who was the Director General of NAFDAC — Akunyili-Crosby, now 36, moved to the United States at 16.

This was after her mother won green card lottery, Akunyili-Crosby moved to the U.S. with her sister to further their education. Her love for the arts was identified when she was very young. There she studied arts and biology, pursuing her love and still staying in the science following the footsteps of her parents.  She initially wanted to be a doctor until she fell in love with arts, according to a profile by the Wall Street Journal.

Notably up until recently, the creative industry in Africa was not as lucrative and vibrant. Ironically, despite  Africa being a land of natural creative, with its rich and diverse culture, parents have for so many years, prevented their children from venturing into the creative arts with claims that the industry always left artists poor, hungry and miserable. Young adults in the field were often referred to as rebellious misfits who had failed in a more serious career. For the lucky few who were allowed to express their creativity professionally, they were still made to pursue other respected careers as a backup plan. Akunyili Crosby is one of such.

Just some years ago, her works went for an average of $3000. This changed after her painting of her dancing with her husband; Justin Crosby sold at $5,000 at an auction. It was titled “I Refuse to Be Invisible.” Three of her works later sold for $8,000 each at an auction in Fredericks & Freiser gallery in New York.  Then, in 2016, an untitled 2011 work sold at the Sotheby’s New York Contemporary Curated sale for nearly US$100,000. This was followed by the sale of “Drown”, an image of the artist reclining in an intimate embrace with her husband, for nearly US$1, 1 million.

Concerning Crosby’s fast rising-career, the Washington Street Journal wrote, “It has been a jet-propelled rise to the top of the contemporary art world for Ms. Akunyili-Crosby – a far cry from the small town in eastern Nigeria where she grew up.” Akunyili went from strength to strength, first in her selection as artist-in-residence at the highly regarded Studio Museum in Harlem in 2011, winning the Smithsonian American Art Museum’s James Dicke Contemporary Art Prize in 2014 and landing a solo exhibition at the Hammer Museum.

In 2015, she was named 2016 Financial Times Woman of the Year, winning the McArthur Genius grant in 2017 from the John D. and Catherine T. MacArthur Foundation and designing the mural that wraps around the Museum of Contemporary Art, Grand Avenue, Los Angeles, in 2018. Her cultural identity combines strong attachments to the country of her birth and to her adopted home, a hybrid identity that is reflected in her work.

Her subjects include herself and her family and friends caught in a tender embrace or sharing tea; other imagery – culled from family portraits, her own snapshots, Nollywood films, advertisements, and Nigerian fashion magazines-reference the country’s revolutionary history and complex postcolonial ­present. The deeply personal universe she depicts is neither Nigeria nor America, she is quick to point out, but some other space that she-and any ­immigrant-occupies. “My journey has created a character who doesn’t really fit into any box,” she said recently.

The artist populates her work with images of family and friends, in scenarios with details derived from everyday domestic experiences in Nigeria and America. These include recollections from the formative years of her upbringing, as well as more recent relationships and experiences. Her work often features an element of self-portrait, as in a series of intimate scenes of the artist with her husband made in the early years of their marriage.

Once she had returned home for a year, partly to clarify her decision to pursue art, and to slowly break it to her parents that she was in a serious relationship with a white American man. “That’s why I feel like my art and Justin are so linked, because it was all or nothing. You rebel or you don’t.” Her mother, Dora, took the news in stride, having by then moved to Lagos to work as head of the National Agency for Food and Drug Administration and Control, where she was battling the crime cartels profiting off the kind of fake medicine that had killed her diabetic sister.

Another recognition came for Njideka when the 2019 Time Magazine “100 Next” list was released, with the acclaimed global visual artist, making the list. Time’s “100 Next” is an annual list of 100 influential people in the world who are actively contributing to change the world through their craft.  “I’m really looking at how Nigeria and the US are complex hybrid spaces,” she told TIME.

Journalist Madeleine Carlisle wrote about her: “Njideka Akunyili Crosby’s works have sold for millions at auctions. But in 2018, it was possible to see one at Los Angeles’ Museum of Contemporary Art free of charge – you didn’t even have to go inside. The visual artist was only the second person to be chosen to create a mural on the walls of the museum itself, which was visible from Grand Avenue’s sidewalk.

“It featured brightly coloured scenes of domestic life: in one section, a woman rests her elbow on a table, seemingly deep in thought. Akunyili Crosby – who moved to the U.S. from Nigeria in her teens – is known for such scenes, some of which are autobiographical and incorporate references to both countries.”