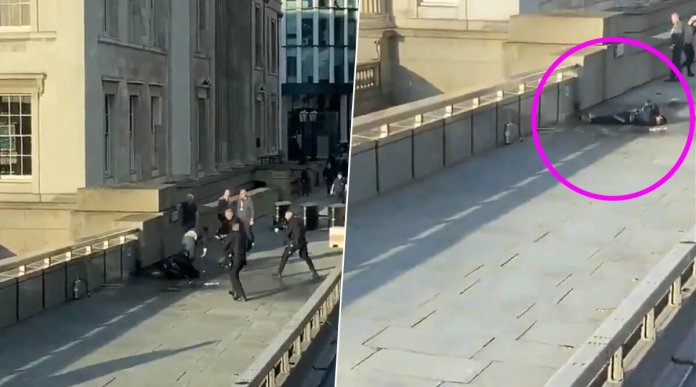 In what appeared like a terror attack yesterday, a lone knife-wielding man injured several people on London Bridge  when he stabbed them, prompting London Ambulance service to declare an emergency.

Also in The Hague, at least three people were wounded  after a knife-wielding man went on a stabbing spree in the main shopping street. Dutch police are hunting for a man in his late 40s after the attack in the Hudson Bay department store, which was packed with shoppers for a Black Friday sale, a police source said.

However, police and other security agents who acted promptly reportedly killed the London assailant who though he was overpowered by some people before the arrival of the police, was shot at pointblank range by the metropolitan police.

The attack prompted the police to declare a terrorist incident. Parts of central London were on lockdown, and police are treating the incident as a terror attack.

According to reports monitored on the incident, a person is believed to have started attacking people with a knife and was then shot by police on the north side of the bridge, according to witnesses.

Footage circulating on social media showed members of the public detaining the suspect and taking possession of a knife.

Police have confirmed “a number of people have been stabbed”.

Giving an insight into the attack, Neil Basu, head of UK counter-terrorism policing, said: “At approximately 2p.m. today, police were called to a stabbing at a premises near London Bridge.

“Emergency services attended including officers from the City of London Police and Metropolitan Police.

“A male suspect was shot by specialist armed officers from City of London police and I can confirm that this suspect died at the scene.” He said a “number of people have been injured” and police have declared the incident a terror attack.

Mr. Basu added that police “believe a device that was strapped to the body of the suspect is a hoax explosive device.”

Video from the bridge shows a group of up to 10 pedestrians tackling a person, with one pedestrian wearing a suit and tie carrying a large knife away from the group, having taken it off the suspect.

The civilians are told to get back as armed officers aim their weapons at the suspect, who is shot at point-blank range.

British Prime Minister, Boris Johnson tweeted: “I want to thank the emergency services and members of the public for their immense bravery in responding to this suspected terrorist attack at London Bridge.

Mayor of London Sadiq Khan said members of the public showed “breathtaking heroism” as he said nobody can divide one of the most multicultural cities in the world.

He added it appears to be an isolated incident and police are not looking for anyone else.

Police were alerted to reports of a stabbing at premises at London Bridge at 1.58pm and officers from the City of London and Met forces responded.

At The Hague, hundreds of people were escorted out of the shopping centre and Grotke Market Street, a busy thoroughfare, in the wake of the incident.

The condition of the wounded and the motive of the attack remain unclear.