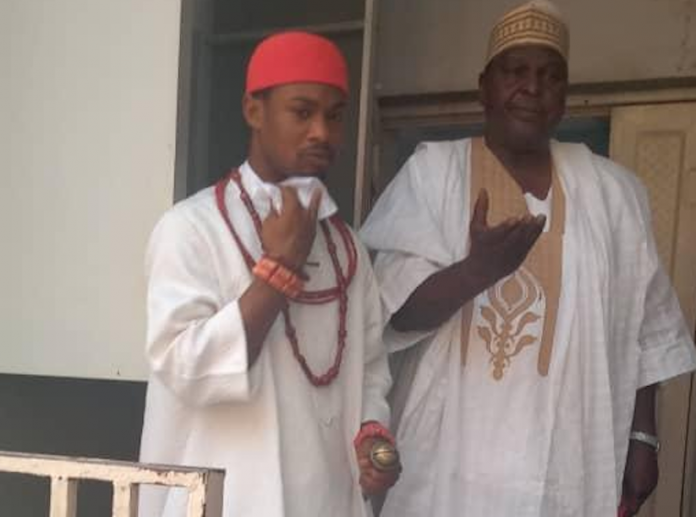 The Federal Capital Territory was recently agog with the presence of His Royal Majesty, Obi of Issele Uku kingdom, Obi Agbogidi Nduka Mnse who was on a working visit to Abuja.

The three-day reception started right from the Nnamdi Azikiwe International Airport where the young and amiable king, accompanied by some eminent members of his cabinet, alighting from an aircraft was royally received by elders from Issele uku and a group of young and energetic dancers, responding to the rhythm of traditional music specially designed for kings and queens of the ancient Benin Empire.

The next day, the highly revered monarch started his day with a courtesy call to the Director General, National Council for Arts and Culture, Otunba Segun Runsewe, OON. The duo, after a long and fruitful deliberation, agreed to chart a new way forward towards the development of culture in Issele Uku and other parts of the Nigerian society.

During the deliberation, the young traditional ruler, who addressed his host as one of the custodian of culture in Nigeria, said that his zeal to meet Otunba Runsewe started when he found out that the Director General had, during his tenure as the Director General of Nigerian Tourism Development Corporation, supported the people of Issele Uku kingdom during their much revered “Inne” festival. The obi added that one of his main reasons for coming on the courtesy visit was to ask the Director General to review, revisit, renew, revive, improve and strengthen that relationship that had existed between his Issele Uku Kingdom and the National Council for Arts and Culture. The Director General in his response, informed the monarch that “the National Council for Arts and Culture will support the people of Issele Uku, support their Inne festival, give them an overwhelming support and make the Inne festival one of the festivals in the national calendar.”

The Obi, through one of the members of his cabinet, Prof Nwabah, a lecturer at the University of Benin, gave the chronology of the historical profile of Issele Uku Kingdom. The amiable traditional ruler commended the Director General and his government establishment for the giant strides they had made over the years to bring about innovations in the nation’s cultural and artistic focus. The next day was a well-attended royal reception at the prestigious International Conference Center in Abuja. It was put together by the members of Issele Uku Development Union Abuja Branch. The event was tagged, “A Day with Our King”, A Celebration of Culture and Royalty.” The ceremony was chaired by a business tycoon, Chief Chika Okafor, who in his opening speech, enumerated the so many successes that had come to Issele Uku Kingdom since the coronation of the young king in the past three years of his being on the throne. He prayed that the town be blessed with more success stories.

The Special Guest of Honour was the host of the Obi the previous day, Otunba Segun Runsewe, the President of World Arts Council, African Region and the Director General, National Council for Arts and Culture. The Director General stressed the role traditional rulers could play in helping to curb and checkmate corruption in Nigerian.

He added that there would be less corruption in Nigeria if traditional institutions would not accord respect to corrupt people in the society and also by not recognising people with ill-gotten wealth.

The following day, the monarch visited the Managing Director of the Niger Delta Power Holding Company, Barr. Chiedu Ugbo, who treated him to a warm reception.

Some members of the business world who desire to invest in Issele Uku Kingdom also had a round table talk with the young monarch.

Various dancing groups from all the towns and villages in and around Issele Uku Kingdom took turns to dance and entertain the king and the audience.