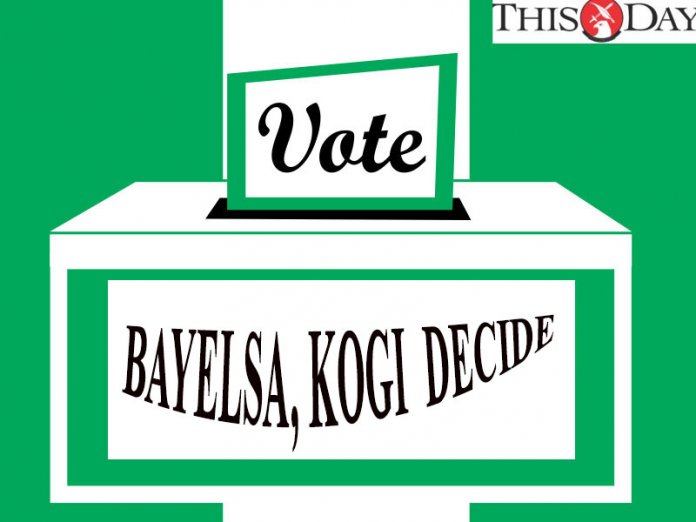 The much-talked November16, Kogi/Bayelsa elections have come and gone. Expectedly, the winners were announced by the Independent National Electoral Commission (INEC) amidst hue and cries. I think the battle will be shifted to the courts. In Kogi State, Governor Yahaya Bello, who wanted a second term, was declared the winner. Although, the candidate of PDP, Mr. Musa Wada and his party are said to have rejected the result of the poll, INEC has since issued the certificate of return to Governor Bello. Notwithstanding the pockets of violence, ballot snatching, votes buying and other malpractices that characterised the polls, President Muhammadu Buhari has congratulated Yahaya Bello and described his re-election as well deserved.

In Bayelsa State, the outcome of the election has surprised many Nigerians and even political pundits. In the past 20 years, Bayelsa has remained a PDP state. However, with the emergence of David Lyon of APC as governor-elect, the ruling party has gradually reared its head in South-South states which in the previous elections proved a no-go-area. Now, Bayelsa State has become an APC state. But the outgoing governor, Seriake Dickson, as reported from various quarters, should share the blame for the PDP resounding defeat at the poll. The failure of PDP to win the election was a self-inflicted problem carefully hatched by Dickson. It is reported that he imposed a candidate and failed to carry other party stakeholders along. There are numerous lessons from the just concluded polls. One, election in Nigeria is still a do- or- die affair.

Both in Kogi and Bayelsa States, there are reported cases of disruption of elections by sponsored political thugs. The Centre for Democracy and Development (CDD), in its reports, has put the death toll of over 10 people in Kogi State alone. Even after the election, it was reported that a PDP’s women leader was set ablaze and gruesomely murdered by suspected political thugs. The desperation of our politicians to win election at all costs has continued to pose great challenges for the growth and development of our fledging and nascent democracy. We keep pointing accusing fingers at the umpire for its imperfection or shortcoming, but fail to remind our politicians that election should not be a matter of do- or -die.

There is the need to play the game according to the rules. Sadly, in the last elections, our politicians had failed to conduct themselves within the ambit of electoral laws. Second, it seems performances which should serve as a requirement for electing our leaders have been discarded. While in developed democracies, political leaders are elected based on their track record of services delivery, in Nigeria the reverse is the case. It might have surprised or annoyed you to have noticed one particular governor who was the director of campaign kneeling down during campaign and apologising to the electorate on behalf of a candidate. Based on this statement, does it mean the electorate should continue to elect leaders even if they failed to discharge their constitutional responsibilities?

With the conduct of Kogi and Bayelsa elections, it appears that our democracy is still in rudimentary stage. With the reported cases of violence and other electoral malpractices that marred the polls, it has shown that unless we change our attitudes, the 2023 elections would be worse than the previous ones.

editor - October 16, 2021 4:22 am
9
PENDULUM BY DELE MOMODU Fellow Nigerians, let me say categorically that anyone who has followed me closely would have noticed my admiration for the Wazirin...