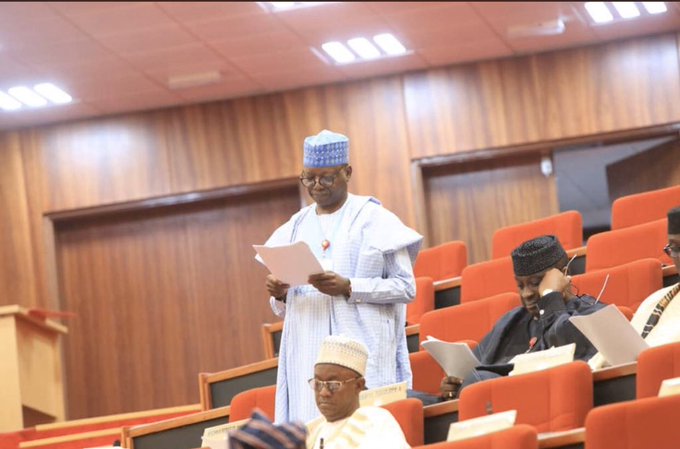 The sponsor of the social media regulatory bill at the Senate, Senator Mohammed Musa, has refuted claims that he plagiarised similar Bill recently passed into law in Singapore.

The internet had been awashed at the weekend with claims that the bill entitled ‘Protection from Internet falsehood and manipulations bill 2019’, was plagiarised from a bill, which was not too long ago signed into law by the Government of Singapore.

In a video broadcast  released by one Frederick Odorige of the Global Coalition for Security Democracy, he stated that the title of the Senator Musa sponsored bill was copied from the Protection from Online Falsehoods and Manipulation Bill 2019 passed on May 9, 2019 by the parliament of the Republic of Singapore and assented to by President Halima Yacob on June 3, 2019.

Senator Musa cited as examples bills on Company Law Reforms, Trade Mark Legislations and Securities Regulations across the globe, adding that the problems and challenges of regulating internet activities cuts across jurisdictions.

He therefore submitted that it is inevitable that lessons be drawn from other jurisdictions in fashioning out workable solutions in Nigeria.

The sponsor of the bill stressed that legislations across the globe are public documents “and national legislations do not claim right over them as to form the basis for plagiarism over them,  their effectiveness being limited to the territorial jurisdiction of each sovereignty”.

Musa had on November 6 presented a bill titled ‘Protection from Internet Falsehood and Manipulations Bill, 2019’ before the Senate which passed through the first reading at plenary and stipulates a maximum penalty of three years jail term for offenders.

Odorogie had in the viral video also accused Musa of ingeniously substituting  the word ‘online’ as used by the Parliament of Singapore for ‘Internet’ in the title of the bill.

According to him, the other parts of the title and most of the other contents of the bill were exactly the same with that of the Singaporeans.

A similar anti-social media bill introduced by the Eighth Senate, sparked outrage across the country, and was later withdrawn.

The old bill titled “A Bill for an Act to Prohibit Frivolous Petitions and other Matters Connected therewith” was sponsored by the then Deputy Senate Leader, Senator Bala Ibn Na’Allah and sought to compel critics to accompany their petitions with sworn court affidavit, or face six months imprisonment upon conviction.

The bill had stated inter alia “Any person who unlawfully uses, publishes or cause to be published, any petition, complaint not supported by a duly sworn affidavit, shall be deemed to have committed an offence and upon conviction, shall be liable to an imprisonment for six months without an option of fine.”

It also said “any person who acts, uses, or cause to be used any petition or complaints not accompanied by duly sworn affidavit shall be deemed to have committed an offence and upon conviction, shall be liable to an imprisonment for a term of two years or a fine of N200,000.00 or both.”

The bill had passed through the second reading before President Muhammadu Buhari distanced himself from it, saying he was committed to free speech.