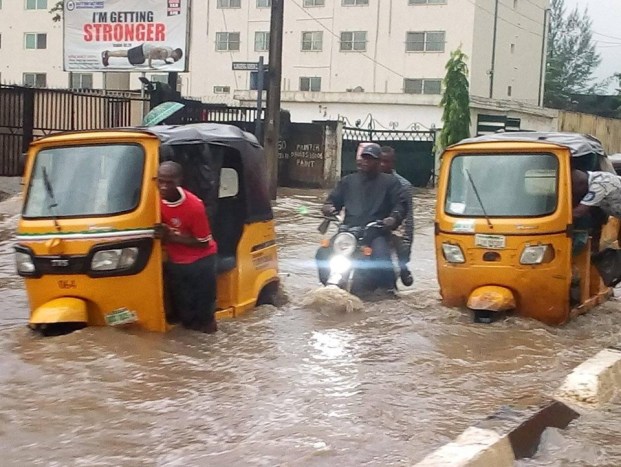 Residents of the Goodluck Jonathan Housing Estate, Idimu Lagos State have been assured the flooding problem in the estate would soon be addressed permanently.

Giving the assurance in Lagos, while addressing a press conference, the building company, Remax Realtors said it has been holding talks with the Lagos State government on strategies to address the perennial flooding in the estate, which has made life difficult for the residents.

Recently, there were protests from some residents of the estate, mostly police officers and men, that the building contractor, Remax Realtors, did not carry out a drainage work on the land adding that the materials used for the houses are substandard.

Chairman of Remax Realtors, Mr. Adesola Adelowo said discussions on how to end the flooding would have been concluded if not the change of government in the state, where discussions had to start all over again.

He said the Jonathan Goodluck Estate flooding is peculiar due the topography with a storm drainage that goes through the area, which requires regular maintenance where the Company channelled the drainage of the estate.

He disclosed that Remax Realtors has written to the current Lagos State government for a partnership on how to address the problem because everywhere around the estate has a very poor drainage.

He countered allegations by some residents of in Idimu Lagos, that the buildings were constructed with substandard materials, stating that the problem of the estate is hinged on flooding which has been on the increase in major parts of Lagos this year.

Adelowo said as it stands today, his company cannot do much on the flood issue without the collaboration of the state government. He pleaded with the residents to have patience.

On the allegation of substandard buildings and plumbing work, Adesola insisted that the buildings are not substandard, stating that Remax has even invited Lagos State for a Control Building Test.

He also lamented that the company is yet to recoup its investment on the estate six years after it was commissioned rather it keeps spending more to achieve comfort for the residents of the estate.

“It cannot be said that the company is making profit from the Idimu estate investment because in the course of the project a lot of dynamics changed within the environment and it became difficult to go back to the Police to change the agreement. He said in addition, some residents were yet to complete payment for the five years given to them to pay.

Adelowo said Remax Realtors has operated for 12 years handling a lot of building projects in highbrow, medium and low scale, “but the Police Co-operative Estate project is the one we have had on high esteem because they are the neglected part of the labour force. So we took it upon ourselves that the Police deserve something good; a better life in and out of office,” he explained.

As a result, he said Remax Realtors approached the Police Co-operative Society in 2013and kicked off a relationship on how to get a housing scheme for them by developing some of the lands they have in Lagos.

“The fact is that we have always responded to these problems but we have cases when the occupiers of the flats will not be around to open their apartments for repairs. Also this problem is not only for Remax Realtors but the stakeholders and estate residents should come in for maintenance.”

“We have even done some drainage work on the perimeter fence which others in that area are following; “that is our Corporate Social Responsibility.”

However, a prominent resident of the estate speaking under anonymity maintained that there is no drainage in the estate. “If they say there is drainage I have not seen it rather water gathers in the estate during the rains and start drying gradually some days after the rains.

“If they said they used standard materials there would not be leakages; even as I speak to you in my flat I have leakage. The leakage comes from my neighbour’s flat upstairs. The Company keeps saying they are coming and after working the situation gets worse.

“If I go for the next estate meeting I’ll pour out my mind. I heard some people went to court but I didn’t go. I have just a token left to settle all the payment for the flat allocated to me but I don’t know if other residents owe much; I know the Police Cooperative gave us duration to pay,” he said.