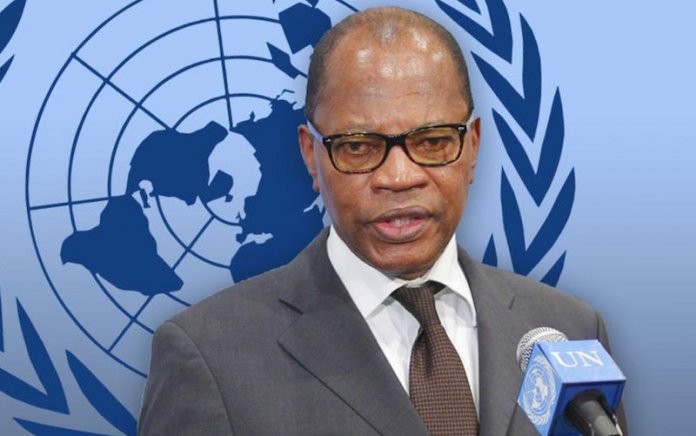 The United Nations (UN) and the European Union (EU) have expressed willingness to support the Nigerian military in it’s effort to restore peace in the Northeast and the Lake Chad Basin.

The Special Representative of the Secretary-General and Head of the United Nations Office for West Africa and the Sahel, Dr. Mohammed Ibn Chambas; the United Nations Representative of the Secretary General for Central Africa, Ambassador Francios Fal and the European Union Representative for West Africa and Sahel, Ambassador Angel Ludsada made the pledge in their separate remarks during a visit on yesterday to the Headquarters of Operation Lafiya Dole (the counter-insurgency force in the Northeast),

Chambers, who led the delegation, said that “in pursuance of the United Nations Security Council resolution 2349 of 2017, which charged my colleagues and I to bring partnership with international agencies to mobilise support to the Lake Chad Basin countries to defeat Boko Haram insurgents in whatever way.

“Our visit here underscores the support for Nigeria Army in its efforts to end Boko Haram insurgency. The UN from inception of the insurgency have been supporting the Multi National Joint Task Force in combating Boko Haram and criminal elements in Sahel and Lake Chad region”

He added: “We should pull resources together to fight insurgency. We commend you for what you have been doing. Your success is our success because it is only when you clear an area that humanitarian workers can access it. So we are here to support the government of Nigeria and the people of Borno.

“We are here to support you and show our strong solidarity and commitment to bring peace back to the region. We will give you the support you need to end this war.”

Similarly, Fal said that global community would mobilise all support it could muster to ensure that Boko Haram insurgency is defeated.

“We are commending all what you have been doing to end this war. We are strong behind you. Together we will restore peace back to the Sahel and Lake Chad region,” Fal said.

Speaking in the same vein, Ludsada said: “Our is to bring you our solidarity and strong political commitment to support the Nigerian military to end insurgency in the region and Africa in general.

“The EU has been supporting your efforts from very beginning with 61 vehicles, five ambulances, lubricating materials among others. I assure you of EU continued commitment to end Boko Haram,” Ludsada said.

Responding, the Head of Military Counter-insurgdncy Operation in the North-East (Theatre Commander, Operation Lafiya Dole), Major General Olusegun Adeniyi, said “your visit is a morale booster to our troops. This visit shows that the International community is with us. I will send pictures of your visit to our troops down there in the trenches.