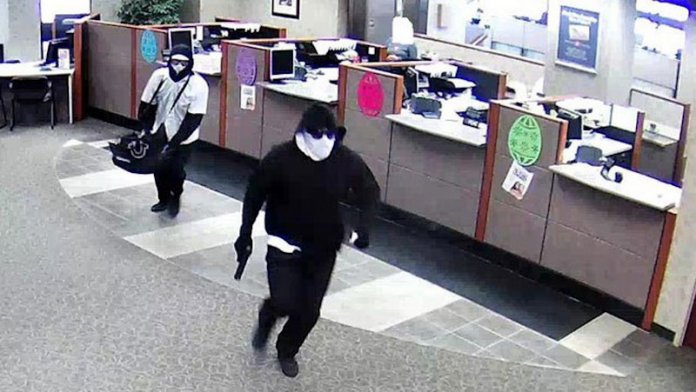 Two persons, including a three-year-old girl, were yesterday evening killed after a gang of armed robbers attacked a commercial bank in Oye Ekiti, Ekiti State.

It was gathered that the deceased were hit by bullets shot by the criminals while attempting to flee the scene.

The baby girl was reportedly in her mother’s shop that is located beside the bank when she was hit by a stray bullet while another victim was said to be a security guard working with the bank.

The robbers numbering about eight used dynamite to gain entry into the bank and carted away large sum of money.

A source said the operation lasted for some minutes before the criminals escaped through the back door of the bank.

It was also gathered that a police van which was hijacked and used to block the highway by the robbers was set ablaze after the operation.

Ikechukwu said: “I can confirm to you that there was a bank robbery. As I am talking to now, the operatives of SARS (State Anti-Robbery Squad) with combined team of 33 Police Mobile Force (PMF) are trailing the armed robbers now. Information at our disposal is that they escaped through the bush path. We are trying to see how we can catch up with them. By God’s grace, we will. Preliminary investigation is ongoing regarding the number of causalities.”

On whether a policeman was among the victims, he said “Like I said, I will issue a statement on that much more lately. Anytime there is a deadly armed robbery attack like this, you cannot rule out that there might not be casualty except it takes the intervention of God. The robbers were able to gain entrance through the use of dynamites.”

He also could not confirm whether a large sum of money was catered away from the bank or not.