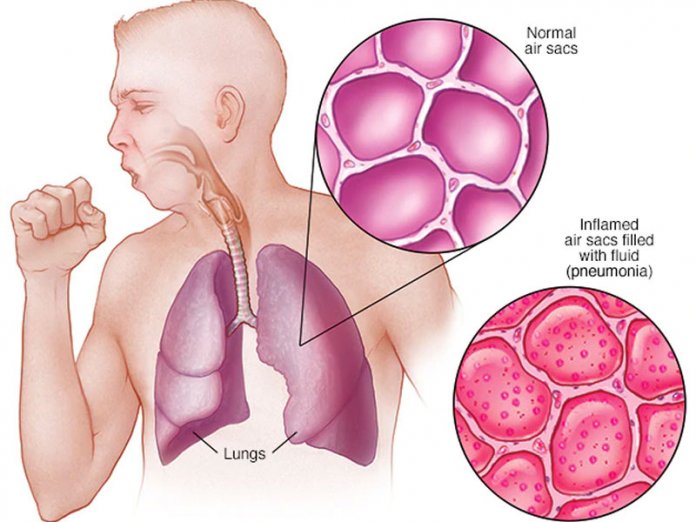 It is not a good time for the Nigerian child. Every hour, 18 of them die due to pneumonia, amounting to 443 deaths per day and at least 162, 000 deaths every year despite the scourge being a highly preventable and curable disease. The scenario can be likened to having a Boeing 737 crash everyday with all passengers dying on board. Martins Ifijeh writes on need to reverse the ugly narrative

If there is one disease that has been killing Nigerian children under five years in their hundreds of thousands due to non-vaccination, misdiagnosis or self-medication, it is pneumonia. When it strikes, it leaves sorrows, tears and blood. Talk about the grim reaper. In a moment you may assume your child is only down with cold, cough and catarrh, and in another moment, he or she is gone. It is the kind of pain a sane society and parents cannot come to terms with. Surprisingly, this is a highly preventable and curable disease.

One of several parents that have had to undergo the pain associated with losing a child due to pneumonia is Mr and Mrs Reuben, whose fifth child, J, a two-year-old, paid the supreme price for their ignorance and lack of government’s intervention on immunisation.

J came down one afternoon with cough. By the next day, he had a running nose, and then cold and bouts of fever. It was the ‘normal’ type of illness children have, so they thought. It was no big deal to them.

As typical with Nigerian parents, they were sure they knew what his discomfort was. They assumed the job of a laboratory scientist and that of a doctor. They ‘diagnosed’ it must be normal fever. They prescribed vitamin c for the cough and catarrh, and paracetamol for his fever.

This was what they offered the little boy all week until they started noticing what could be termed a fake sign of recovery, and then they stopped. But what they didn’t know was that a viral infection was comfortably incubating in him while silently damaging his organs.

By the second week, his bouts of fever had become severe. He started having laboured breathing. He suddenly became pale and week. “I took him to the chemist nearby where he was given drugs for malaria,” said Mrs. Reuben. But this made his case worse.

Just a day after, the little boy had started gasping for breath. It was the scariest thing the parents have seen. But like a remedy too late, he was rushed to the hospital where the doctor examined his heart beat and lung function, and concluded that he had severe pneumonia. Two hours later, J died from a disease that is largely preventable through pneumococcal conjugate vaccine, and 100 per cent treatable through medications.

The Grim Picture
J is just one among several thousands of children of under five in Nigeria who have died from a disease they need not die from.

On specifics, 162, 000 Nigerian children of under five years old died from pneumonia in 2018, if figures from the United Nations Children’s Fund (UNICEF) are to go by. This shows that, like J, at least 443 children die in Nigeria every day due to pneumonia. This amounts to 18 Nigerian child every hour, and one child every 3.2 minutes in Nigeria. By the time you are done reading this article, be sure at least five children must have breathed their last breath because they couldn’t be protected from pneumonia by their parents and Nigeria; a country that swore to give every child the right to life under the 1999 Constitution as amended.

On many occasions, Nigeria is often just behind India on many healthcare indices, but for pneumonia, Nigeria leads the pack. India is second with 127,000 deaths, while Pakistan has 58,000, with the Democratic Republic of Congo trailing behind at 40,000, and then Ethiopia at 32,000. These five countries alone were responsible for more than half of the lives pneumonia claimed in 2018 worldwide.

The Nigerian Representative, UNICEF, Pernille Ironside said of the entire child deaths in Nigeria in 2018, a whopping 19 per cent alone was due to pneumonia, and that it was the biggest killer of Nigerian children of under five years in 2017.

He said: “Pneumonia is a deadly disease and takes so many children’s lives – even though this is mostly preventable. And yet, this killer disease has been largely forgotten on the global and national health agendas. We can and must change this.”

A Disease of Poverty, Gender
A recent report by the Save the Children International described the public health concern as a disease of poverty and gender, adding that while boys are more likely to contract the disease for physiologic reasons, girls were more unfortunately likely not to be treated.

The report, tagged: Fighting for Breath, said: “Equity is at the heart of the crisis. Pneumonia today is overwhelmingly a disease of poverty, as it has been throughout history. The risks of contracting the it are heavily skewed towards the poorest children, while the prospects for receiving accurate diagnosis, effective treatment and appropriate care are skewed towards those who are better off.”

Gaps
A major survey finding from the 2016 Multiple Indicators Cluster Survey/National Immunization Survey Coverage (MICS/NICS) reveals that 77 per cent of children aged 12 – 23 months in Nigeria have not received all the routine vaccinations as recommended, while 40 per cent of children in this age group did not receive any vaccinations putting it to be far below the 90 per cent national target that has been set by the country.
According to the World Health Organisation, children immunised with the pneumococcal conjugate vaccine are prevented against pneumonia.

Another major factor currently fueling the needless deaths from pneumonia has been fingered to be the country’s lack of access to quality and affordable healthcare.
While the Nigerian government has put steps in place to push for UHC, indications show the country was still far from achieving it.

The Save the Children report believes pneumonia cannot be treated in isolation. “Most fatalities occur because the parents of the children affected are excluded from health systems as a result of cost or distance, or because they see health providers as ineffective, unresponsive and unaccountable. Tackling pneumonia requires a properly financed health system that reaches the most disadvantaged children, delivering effective care through a trained and supported workforce.
Not many Nigerian parents are also aware of what to do when their children come down with signs of pneumonia, which then calls for awareness.”

Risks, Symptoms
A Public Health Physician, Dr. Samson Ogbejiele told THISDAY that children have a high susceptibility to contacting the bacteria or virus because of their lowered immunity, adding that people above 65 years of age were also at a higher risk for it.

He said: “Other risk factors could include asthma, diabetes or heart disease. Those recovering from surgery, those with low vitamins and minerals, those who smoke, and drink too much alcohol are also prone to it.”

He said symptoms can come on fast or slow depending on the person’s immune system. “Among symptoms are cough, tiredness, labored breathing, high fever up to 105F, low appetite, among others.”

Prevention, Treatment
Ogbejiele believes if every child is immunised with the pneumococcal conjugate vaccines, the incidents and deaths occasioned by the disease in Nigeria will be drastically reduced, adding that early diagnosis and treatment with recommended antibiotics could cure it.

“For adults, it is dangerous smoking or drinking when taking the antibiotics for its cure,” he added.

UNICEF’s Henrietta Fore said only cost-effective, protective, preventative treatment, which are able to reach children where they are will be able to truly save millions of lives from the disease.

Way Forward
The Save the Children report called on government to give the fight against pneumonia the priority it deserves through increased funding, improved healthcare system, including accessible and affordable healthcare, as well as Universal Health Coverage.

“It called for an immunisation structure so as to be able to reach the most marginalised children across board.