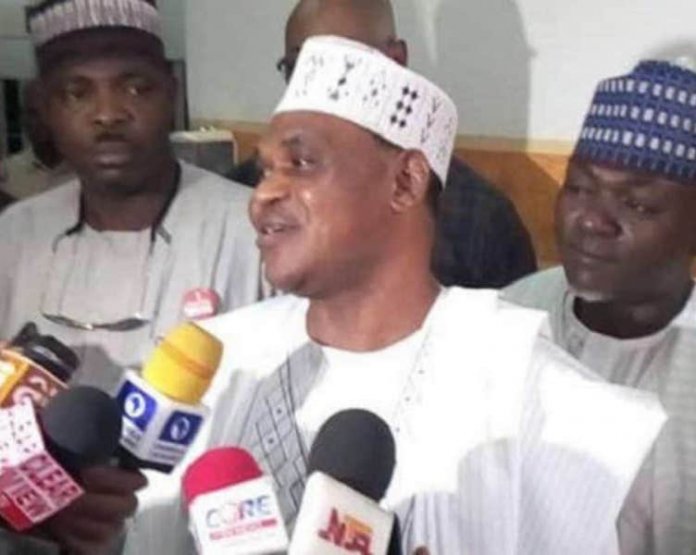 The governorship candidate of the Peoples Democratic Party (PDP) in last Saturday’s election in Kogi State, Mr. Musa Wada, yesterday rejected the declaration of Governor Yahaya Bello of the All Progressives Congress (APC) as the winner of the contest by the Independent National Electoral Commission (INEC), saying he would seek redress at the election petition tribunal.

The electoral body had earlier in the day, declared Bello as the winner of the tense election, stating he polled 406,222 votes to Wada’s 189,704 votes.
In Bayelsa State, the PDP’s candidate in the gubernatorial tussle, Senator Douye Diri, who lost to APC’s David Lyon, also rejected the unfavourable outcome of the poll and asked INEC to declare him winner; otherwise he would challenge the outcome.

Notwithstanding the rejection of the outcomes of the elections, which were marred by widespread irregularities and violence, President Muhammadu Buhari has congratulated his party’s candidates on their victories and urged them to partner him to work for the betterment of their states and Nigeria.

Announcing the results of the Kogi governorship election in Lokoja, the Returning Officer, Professor Ibrahim Garba, said Bello, who is the incumbent governor, having satisfied the requirements of the law, was returned as the winner.
The candidate of Social Democratic Party (SDP), Ms. Natasha Akpoti, came a distant third, with a total of 9, 482 votes.

However, there was a mild drama after the announcement of the results as the PDP agent at the collation centre, Mr. Joe Agada, who had earlier raised many objections while the collation was going on that were ignored, declined signing the final results sheet.
He said he could not sign as the results declared were not the true reflection of what happened on the field on Saturday.

Agada told the gathering that based on the alleged distortions, the PDP would seek redress in the tribunal.
While reacting to his victory, Bello expressed gratitude to the people for re-electing him and described his re-election as a victory for true democracy.

Bello, in a statement by his Director General, Media and Publicity, Mr. Kingsley Fanwo, said he would be spurred to do more.
He said: “This victory is for Kogi people that value true democracy. And we can assure them that Governor Bello will not abandon his campaign slogan, which expresses his desire to do more for Kogi people.

“We thank the people of Kogi State who voted for us. We also thank Kogi people who did not vote for us; they have challenged the governor to do more for them to earn their confidence.
“We urged the Peoples Democratic Party (PDP), to act to exemplify the spirit of sportsmanship by accepting the verdict of Kogi people. We also thank the party hierarchy for throwing their weight behind the governor.”

Wada Heads to Tribunal to Challenge Result of Kogi Poll

However, Wada has rejected the conduct and outcome of the gubernatorial election, saying he would be approaching the election tribunal to challenge the results.
He told journalists in Abuja that given the widespread irregularities and violence that led to the disenfranchisement of many voters, there was no way he or his party would allow the results go unchallenged.

He said: “It is clear to all there was no election on Saturday, November 16th, 2019 but a declaration and execution of war against the people.
“What happened in Kogi was an organised war against democracy; coup against the people and seizure of power through brigandage and the barrel of the gun with members of the police and other security agencies coordinating the stealing of the people’s votes.

“The police aided armed APC thugs to invade polling units with impunity, shoot and kill voters and carted away ballot boxes to government facilities where results were written in favour of APC and handed over to INEC to announce against the will of the people.”

He also accused the police of providing helicopters used to attack polling units, fire tear gas on voters and provide cover for APC hoodlums and policemen to brutalise the people and steal their mandate.

Also rejecting the election results in Bayelsa State, Diri yesterday pointedly asked INEC to formally declare him the winner of the election.
He said he could not fathom how the INEC got the figures it announced after the poll, adding that he polled 98,582 votes to APC’s 55,903, according to the ‘situation room’ he set up to collate results from all the wards and local government areas.

He wondered why a local government like Nembe could have more voters than Yenagoa, the state capital, arguing that in the only area where the poll took place in Nembe, the entire score was 932 votes for both parties.
He added that the over 80,000 votes the APC got in the area were arbitrarily allotted to the party.

Diri, flanked by the PDP Deputy Chairman, South-south, Mr. Emmanuel Ogidi; his running mate, Senator Lawrence Ewhrujakpo; members of the Inter Party Advisory Council (IPAC) who also contested the election, said as the rightful winner of the election, he should be immediately declared winner.

“This is the result. Based on this result, PDP and its candidate are the winners,” he said.
He also accused INEC of being unable to show the court ruling setting aside the judgment of the Federal High Court, which the APC claimed to have secured to allow it run for the election.

He said: “The subsisting court judgments were two and at the time of conducting the election, APC was not by the law on the ballot. We contested the election not with the APC but with other political parties. With the results that INEC has released, which should not comprise the APC candidate in that election, the PDP led in those results.

“We urgently call on the INEC to declare me and the PDP as the winners of that election. I am the winner of that election and I am the governor-elect.”
In his comments, Ogidi said that the condemnation that has trailed the violence and other breaches were a shame on INEC.

“We told our people don’t carry arms, but the APC wants to rule, yet they are killing the same people. The observers have condemned the violence even former President Jonathan (Goodluck). INEC can still redeem their image. There are other elections that will come on. We still prefer our democracy,” he said.

However, in his reaction to the outcomes of the elections, Buhari saluted Lyon and Bello on their impressive victories.
In two separate statements issued yesterday by the Special Adviser to the President on Media, Mr. Femi Adesina, the president described the elections and emergence of the
APC candidates as “a race well run and a victory well won.”

He also urged Bello to see his renewed mandate as another opportunity to build on the foundations already laid towards improving the lives of the people of Kogi State.

He commended APC supporters in particular and Nigerians in general, for exercising their civic rights in a peaceful manner, regardless of electoral violence that was recorded in some locations.
The president also condemned the loss of lives in the two states, particularly prior to the election, while also commiserating with the families and loved ones of those who lost their lives to violence.

According to the president, “All political actors and stakeholders must take deliberate steps to eschew electoral violence as a peaceful and orderly process is vital to our quest for enduring democracy.
‘‘Violence during elections vitiates our commitment to demonstrate to the world and upcoming generation that we are a people capable of electing leaders in a peaceful and orderly manner.”

He also lamented that in spite of the efforts of officials of INEC and other security agencies to ensure within the ambit of the law a free, fair and credible elections, pockets of unrest, mostly sponsored by desperate politicians, were recorded during the poll.

Buhari said he was looking forward to working with the incoming governors to improve the lives of the people of their states, while ensuring the security of lives and property of all citizens.

He also urged the governors-elect to run a government that will cater for other divergent interests in the next phase of governance, while he implored those who were dissatisfied with the outcome of the poll to seek redress through the constitutionally established means.

Meanwhile, amidst complaints of thuggery and violence, INEC yesterday said that all complaints against the conduct of the elections should be channeled to election petition tribunals, stating that the commission had no powers to cancel any election once results had been announced.

INEC national commissioner and chairman of voters information, publicity and public information, Mr. Festus Okoye, said in Abuja that there was nothing the commission would do at the moment as all complaints should be sent to the tribunals.

According to Okoye, “The moment the polling unit has made a declaration, the moment the result has been announced at the polling unit, the commission does not have the power to say cancel this election. So I believe that the state where we are now, the returning officer has made a declaration in relation to Bayelsa, is completely out of the hand of the commission. And it’s now within the domain of election tribunal.”