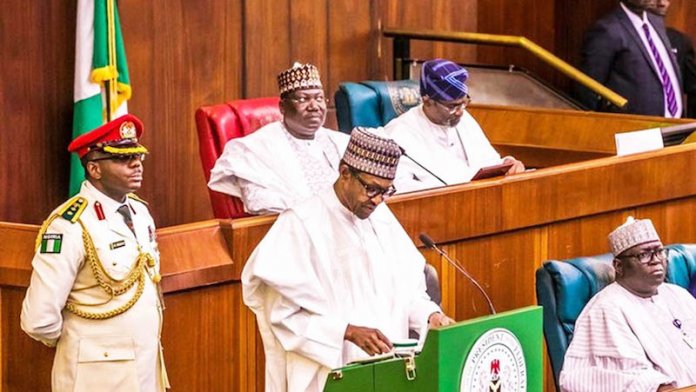 * PDP senator takes oath
Deji Elumoye in Abuja
President Muhammadu Buhari has forwarded six aviation sector bills to the Senate for consideration and passage into law.
This is just as Senator Abdullahi Danbaba was sworn in on Tuesday as the senator representing Sokoto South on the platform of the Peoples Democratic Party (PDP).
The president had in a letter written to the Senate President, Dr Ahmad Lawan, and read at plenary stated inter alia: “Pursuant to Section 58 of the Constitution of the Federal Republic of Nigeria 1999 (as amended), I formally request that the following six Bills be considered for passage into law by the Senate.
“The bills are: Civil Aviation Bill, 2019; Federal Airports Authority of Nigeria Bill, 2019; Nigerian College of Airspace Management Agency (Establishment) Bill, 2019; Nigerian College of Aviation Technology (Establishment) Bill, 2019; Nigerian Meteorological Agency (Establishment) Bill, 2019; and Nigerian Safety Investigation Bureau (Establishment) Bill, 2019.”
Lawan, after reading the executive letter, directed the Clerk of the Senate, Mr Nelson Ayewoh, to ensure that the bills are gazetted and distributed to all senators.
Also on Tuesday, Abdullahi Danbaba was sworn in by the Clerk of the Senate as the senator representing Sokoto South Senatorial District.
The legislator was sworn in shortly after the adoption of the votes and proceedings of the  Thursday, November 14 by the upper chamber.
Speaking after the new senator was sworn in, the Senate President directed the Chief Whip, Senator Orji Uzor Kalu, to “give him a befitting seat”.
The Court of Appeal sitting in Sokoto had on October 30, returned Senator Danbaba of the PDP as senator representing Sokoto South in the National Assembly.
Justice Fredrick Oho set aside the judgment delivered by the Sokoto State Election Petitions Tribunal which dismissed the appellant’s petition in favour of the respondent, Abubakar Shehu-Tambuwal of the All Progressives Congress (APC).