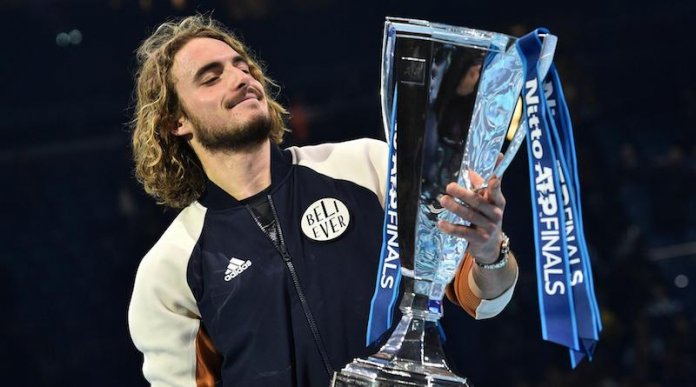 Stefanos Tsitsipas says he is “really close” to winning a first Grand Slam after claiming the biggest title of his career at the ATP Finals.

The Greek, 21, beat Dominic Thiem on Sunday to become the youngest winner of the season finale since 2001, with six-time Grand Slam champion Boris Becker declaring “a superstar is born”.

He made his first Slam semi-final this year and is now world number six.

“I feel like my game is getting better over time,” he said.

“I believe I’m really close to being crowned a Grand Slam champion.

“I know these are strong words that I say, but I do feel like I belong to be there.”

Tsitsipas, who reached the Australian Open last four in January to launch his breakthrough year, kept his nerve to beat Thiem in a tense final-set tie-break at London’s O2 Arena.

He was already the youngest man to achieve wins over greats Roger Federer, Rafael Nadal and Novak Djokovic before his victory on his debut at the season-ending tournament that features the year’s best eight players.

“He is box office,” Becker said.

“We always ask the question of where is the road going after Federer, Nadal and Djokovic.

“After this week, I think tennis is in safe hands.”

Former British number one Tim Henman said Tsitsipas will be a “massive star of the future”.

“It has been an unbelievable year, a breakthrough year; he came to this event to give it one last push and he will be mentally and physically exhausted because he’s put so much into it,” the four-time Wimbledon semi-finalist told BBC Sport.

“His quality of all-round play, he’s serving big, he’s looking to be aggressive at the baseline, and the stats when he is willing to come forward and finish the point have been amazing.

“Added to that is the long hair and the appeal – he will be a massive star of the future.

Tsitsipas was the youngest of four players aged 23 or under to qualify for this year’s ATP Finals but as yet the younger generation has been unable to break Federer, Nadal and Djokovic’s stranglehold on the sport’s four major titles.

The trio have won 55 Grand Slam titles in their careers combined, including the past 12.

Thiem, 26, who has been beaten twice by Nadal in the French Open final, thinks one of the younger stars will win a first Slam in 2020.

“I think that for sure we can do it next year,” the Austrian said.

“We are all playing great tennis – Sascha [Alexander Zverev], Stefanos, me, some other guys.”

Tsitsipas said his work and effort meant he “deserves” to win a first Grand Slam but admitted it will be hard to stop the sport’s ‘big three’.

“It is really difficult for us because once they get deep in a tournament they tend to play, to get better and play better, feel better,” the Greek said.

“For me, that’s a really difficult task to do for players, to be able to beat them in these Grand Slams, because it’s the best-of-five format, and it just gives them more chances to stay in the match.

“I think if things were best of three, it could have been much more different when it comes to Grand Slam champions over the years.”

Tsitsipas was a hitting partner for Thiem when he made his debut at the ATP Finals in 2016.

The pair have a good relationship and embraced warmly on court after Tsitsipas sealed victory, with the Greek kissing opponent on the shoulder.

Tsitsipas was passionately supported across the week inside the O2 Arena, probably because of his attractive playing style, relaxed manner on court and entertaining demeanour off it.

He posed with his ATP Finals trophy alongside the tournament’s ball boys and girls and has a video blog on YouTube which has 162,000 followers.

“He has a very attractive game style, one-handed backhand, comes in [to the net] a lot – a very beautiful technique, as well,” the Austrian explained.

“I’m also very sure of the fact that I can challenge him in every single match we’re going to play.

“I really hope that we’re going to have a lot of big matches coming, the two of us.”