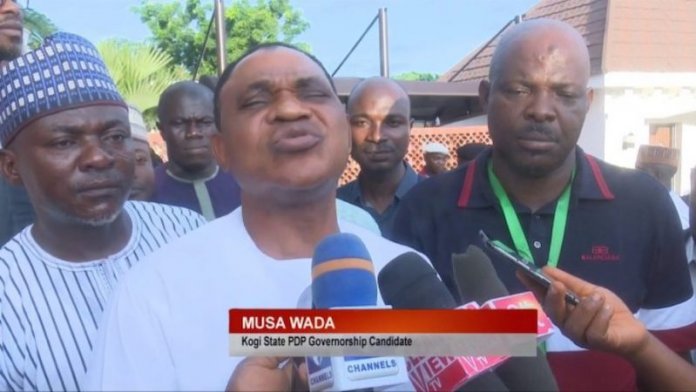 The Peoples Democratic Party (PDP) and its candidate in Saturday’s gubernatorial election in Kogi State, Musa Wada, have rejected the result of the election as being announced by the Independent National Electoral Commission (INEC).

Wada disclosed this while speaking at a press briefing held at the Suitorial Hotel in Lokoja on Sunday.

He described the election as a daylight robbery and slap on the political will of the entire people of the state that voted on Saturday.

“You do not call this an election but a total scam, war and oppression on the innocent people of the state.

“It’s just a mare formality to impose their stooge on the people of the state,” he said.

He condemned the security settings and described them as a disgrace to Nigeria’s democratic system.

He vowed to challenge the abnormalities in the court of law, adding that he was sure of getting justice.

He expressed sadness over the roles the Nigeria Police personnel played during the crisis-ridden election.

“If what happened on Saturday is what we all believe to be an election, the democracy is far from what the world think of it,” he said.