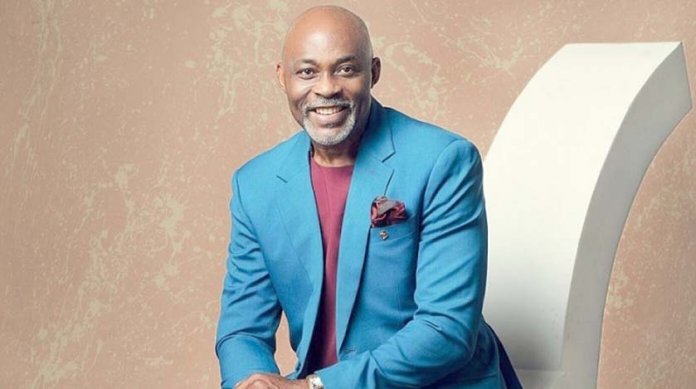 A heir, Kolade (Efe Iwara) would have to taste the bitter side of life before gaining access to his late father’s estate in a new movie, Seven, writes Ferdinand Ekechukwu

You may just want to check out the trailer for the upcoming movie titled, Seven. As soon as you do, most likely the feelings you get would make you want to watch the clip over again, just like this writer. Its action packed and fast paced. Leaving you with scenes and sceneries that put you pretty much in anticipatory to seeing the full movie.

The official trailer for the movie Seven was released about a fortnight ago and it has got social media users talking, especially with its star cast like veteran Sadiq Daba in a cameo role; Bimbo Manuel, RMD and legendary Ajegunle music icon, Daddy Showkey. Shot in 2018, the movie was set both in the posh and poor areas of Lagos.

An heir from the classy side would have to live in the ghetto area of Ajegunle and experience hard street life that is replete with threats just so he could acquire his late father’s estate. This he must do within a defined number of days so as to possess his inheritance.

“Before you can take over my estate, I want you to spend seven days in Ajegunle”, thus came the title for the movie, Seven.

Hear same voice in the opening of the trailer, “He’s my son…. He didn’t learn any of the things that we learnt growing up,” in Ajegunle where hard life is real. The trailer also shows viewers the arduous encounters Kolade faces while living in Ajegunle, a world supposedly filled with thugs, guns and violence. Popular web-series ‘The Men’s Club’ & ‘Rumour Has It’ star, Efa Iwara, plays Kolade, the rich and irresponsible son of a businessman, who following his father’s death, is given seven days to survive in Ajegunle.

There he will go through events that will either make or mar him. This task is given to him by his late father as a prerequisite for gaining access to his inheritance and his late father’s estate.

The film’s gritty nature is a departure from the fun of Igho’s first foray into Nollywood, The Eve. Coming from the stables of Lavida Studios in collaboration with Remote Pictures & Envivo distributed by Filmone, Seven will open in cinemas nationwide from November 29, 2019.

Other cast ensemble of the action drama includes Uche Nwaefuna, Patrick Diabuah, Uzikwendu, Koffi Tha Guru, hip hop musician Orezi, Evaezi. Since Tosin Igho made his Nollywood debut with his 2018 film The Eve, starring Nollywood stars John Okafor and Beverly Naya, it appeared clear that he was one to watch, and that edge he has maintained.

Tosin Igho is an entertainment entrepreneur being a musician, film maker, video director and producer.

He is the son of Peter Igho a former Head of NTA and veteran in the film industry. Multitalented Igho was born in Lagos. He grew up and went through school both in Lagos and the United Kingdom. At the age 17, he founded a group called immaculate which consisted of six members and went on to produce their hit song (roc da party); he also directed the music video for the song.

Three years later, he went on to study at a film school in Southern Africa, there he got a record deal with Sony BMG as a member of the hip hop group” Da Pyramid” where he produced the song “Never be the same” which held the number one spot on South Africa Metro FM for 6 weeks, a record at the time.