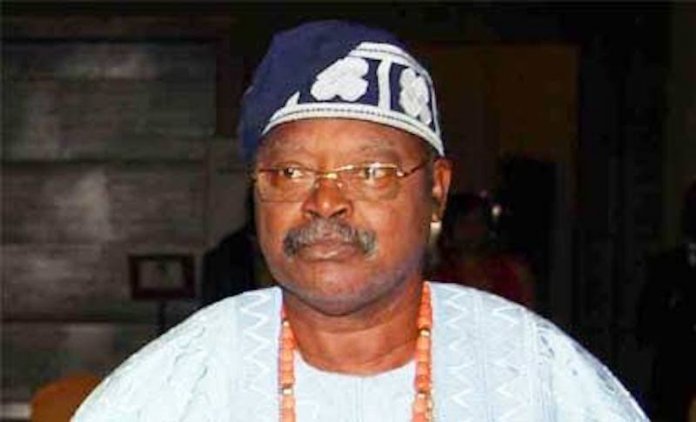 Chief Alexander Opeyemi Akinyele, an Elephant has fallen. For us in sports, the Lobosin was a different sort of administrator never seen before. Brought panache and drama to sports.

Remember his tiff with former Sports Editor of NAN? Vincent Obi? In the heat of Nigeria’s suspension by FIFA in the early 1990s, Lobosin went to town to claim it was reversed. NAN sports desk under Vincent disputed the claim by Akinyele. He was livid and threatened fire and brimstone, claiming as a former minister of Information supervising NAN he can order for the sack of the Editor.

SWAN under Fan Ndubuoke challenged Akinyele to produce evidence of the lifting of the suspension or tender unreserved apology to NAN and Vincent.

At a crowded press conference inside the boardroom of the National Stadium in Lagos, Akinyele dismissed Ndubuoke and SWAN. ” Who is Fan Ndubuoke in the catalogue of men to demand an apology from I, Chief Alexander Opeyemi Akinyele, the Lobosin of Ondo?” roared the then NSC Chairman in anger. The entire hall went dead silent but somehow, some elders in sports intervened and the matter died a natural death with NAN vindicated. Nigeria served out the ban.

Chief Akinyele was not someone to see white and call it black. When some national sports federation presidents were claiming to be spending their hard earned money to run their federations, the Ondo high Chief told them pointblank not to do such anymore. ” If there is nothing you are getting in return why are you spending your money to run your federation?” Akinyele queried. Thereafter, the noise of ‘ I am spending my money on my federation ended.’

Akinyele fought bitter war with the then NOC under Alh. Raheem Adejumo. The Olympic Game in Barcelona in 1992 was the root cause. In the normal IOC tradition of recognising presidents of National associations far above any other delegate from their affiliate members, Alh. Adejumo was given far more recognition and respect than Akinyele.

The Ondo Chief will not take any of such, claiming govt funded Nigeria’s participation and so he as head of the government delegation deserves more respect and honour. On return from the Games, Akinyele made moves to remove Adejumo and impose his stooge. At a point he was contemplating annexing the NOC post to himself.

As we await plans from his family, it will not be out of place for sports to be well represented at the burial of this man who claimed at inception of his tenure at NSC that he knows very little about sports but willing to pay for extra lessons to catch up. He indeed was a good student of Nigerian sports. He left his marks on the sands of time.
To our colleague, Kayode Tijanni, who was his Media Adviser, we share in your grief.