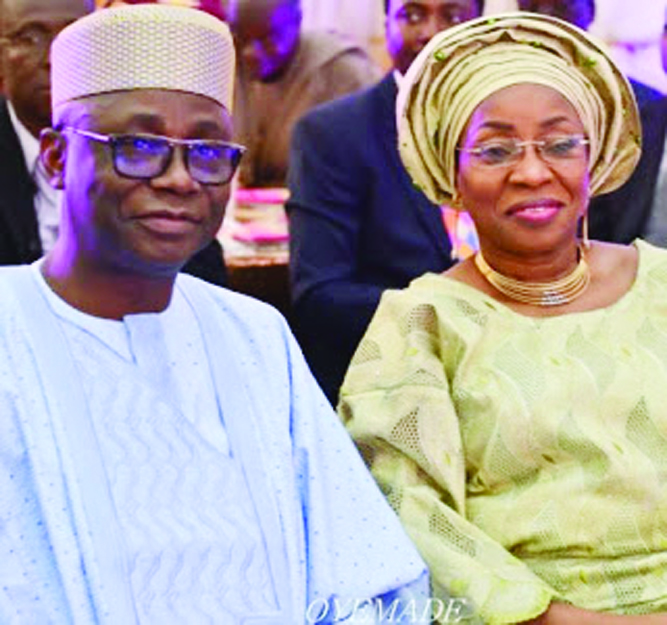 The Serving Overseer of the Latter Rain Assembly, Pastor Tunde Bakare, was 65 on Monday. He marked the day quietly. However, goodwill messages flowed from across the globe for this blazing pastor who is never afraid to speak out against oppression. Yinka Olatunbosun digs into the life and times of the revered Latter Rain minister

Love him or hate him, Pastor Tunde Bakare is a man of God with guts. His public persona as a pastor, who cites the scriptures as frequently as a lawyer cites cases in the court, is firmly rooted in his spiritual life – first as a pastor at the Deeper Life Bible Church before joining the Redeemed Christian Church of God. In 1989, he founded The Latter Rain Assembly in 1989 and has since been known as one of Nigeria’s politically influential pastors whose “pulpit activism” has been controversial, poignant and relevant.

Bakare was born a Muslim before he converted to a Christian. His activism may have been inadvertently tapped from his Abeokuta roots. Abeokuta is famed for activists, liberation movements and  palpable sense of comradeship. History revealed that most of these activists were staunch members of the church. From All Saints Primary School to Lisabi Grammar School, Bakare had his heart prepared for what would be the foundation of his political consciousness.

After his secondary school education, he proceeded to the University of Lagos where he studied Law. Called to the bar in 1981, he cut his teeth at Gani Fawehinmi Chambers. Needless to say, Chief Gani Fawehinmi was a foremost human rights lawyer who was very vocal about demanding for good governance, democracy and justice. From there, Bakare proceeded to Rotimi Williams and Co., Burke and Co. Before establishing his own chambers, Tunde Bakare and Co in 1984.

Consumed by the power of spiritual-consciousness, he founded The Latter Rain Assembly in 1989 and remains the serving overseer till date. In addition to this, he presides over Global Apostolic Impact Network (GAIN). Like his contemporaries, Bakare had tried to have different branches of the church but the idea had been botched a couple of times. However, reports have it that an N18 billion church project in Oregun, Ikeja, Lagos State is in the offing.

Bakare is widely known as a strong critic of corrupt government, anti-people policies and yes, church-owned institutions that he considered to be elitist. He has reportedly condemned churches that establish schools and hospitals that are completely not affordable to members of the church, some of whom had donated to the project while in the process of execution.

Bakare’s sermons are a hybrid of biblical inferences and political commentaries which sometimes makes them quite controversial. In 1999, he predicted that Obasanjo won’t be sworn-in as President; that he would be killed before D Day. It did not happen. Obasanjo was sworn in, did a second term and was almost doing a third term.  Bakare had a controversial reason for the failure of this prophecy.

In March 2002, he also did a critical sermon against Obasanjo. In 2011, he was the running mate for Mohammadu Buhari on the platform for Congress for Progressive Change (CPC) in a presidential race that was lost to President Goodluck Jonathan. Perhaps, that put him in good stead to take a critical assessment of the Jonathan administration.

In January 2012, Bakare’s Save Nigeria Group (SNG) was part of the civil action against the planned removal of fuel subsidy which immediately shot up the prices of goods and services in its wake. SNG in alliance with the Nigerian Labour Congress and other trade unions mobilised a week-long peaceful protest that attracted notable Nigerian artists such as Bankole Wellington a.k.a Banky W, Ruggedman, Femi Anikulapo Kuti amongst others. Critics of the protest called it a “jamboree” and an attempt by the opposition party to discredit former President Goodluck Jonathan administration. Anyway, the protest led to the reversal of the pump price of petrol. Unfortunately, the petrol that the SNG said was too expensive at N89 per litre is now sold for N145 per litre under Buhari. Sadly, Bakare and the SNG have been silent.

In the light of new developments across the country, Bakare has voiced his concern over a number of issues such as those of Miyetti Allah and some groups that unleash terror on innocent civilians in various parts of the country. He was also critical of Buhari when he was away in the United Kingdom for a protracted period on health grounds.

The fiery pastor has also been trending recently for his prophetic declaration that he would run for President after Buhari’s second term. Bakare made the proclamation during a sermon; as seen in a video that has since gone viral.

“Take it to the mountain top if you have never heard it before. I am saying it to you this morning, in the scheme of things, as far as politics of Nigeria is concerned, President Buhari is number 15 and yours sincerely is number 16. I never said that to you before, I want to let you know it this morning; nothing can change it, in the name of Jesus. He (Buhari) is number 15; I am number 16,” Bakare said, placing his right hand on his chest.

“To this end was I born and for this purpose came I into the world. I have prepared for this for 30 years. When he (Buhari) chose to run in 2019, he is still number 15, when he steps out, I step in. His assignment is that of Moses, to take Nigeria to River Jordan, but he can’t cross it. It will take a Joshua to go to the other side and begin to distribute the resources to the people of this nation,” Bakare told his congregation.

Recently too, while delivering one of his sermons at the Latter Rain Assembly, Bakare lamented that some people have been praising a particular politician who stole from them, and regarding him as a generous man.

The fiery preacher, who also spoke about the race to 2023, added that a truly generous man is a man who “devises generous things, and by generosity, he shall stand”.

“The eyes of those who see will not be dim. The ears of those who hear will listen. Also, the heart of the rash will understand knowledge and the tongue of the stammerers will be ready to speak plainly,” Bakare said.

“You will not go without vomiting what you have stolen. Wait and see. Because a king will reign in righteousness and princes will rule with justice. Unfortunately, Nigeria people, you celebrate your villains and crucify your heroes.”

Despite his critical stance against the government on biting socio-economic realities and the knack to exercise his freedom of expression, Bakare was congratulated by President Buhari on his 65th birthday.

The President’s congratulatory message is conveyed through a statement by his Special Adviser on Media and Publicity, Mr. Femi Adesina, in Abuja on Sunday November 10.

Adesina quoted the president, in a personally signed letter, addressed to Bakare as saying: “I rejoice with you as you gracefully clock 65 years of age in good health”.

He added: “I am glad that you have remained faithful and true to your callings, particularly as a pastor and preacher, contributing to pointing people to God’s kingdom, teaching them on how to get there, and live acceptable lives before God.

“We have shared ideas on how to engender a better country, and formed a tag team for political power. May the ideas germinate fully, proliferate and give us the country of our dreams.

“As you turn 65, I pray that your indomitable spirit will continue to point Nigeria to all that is noble and just. I wish you longer life in good health and strength.’’

Away from his scathing commentaries, Bakare is known as philanthropist, funding many scholarships at different levels of education.