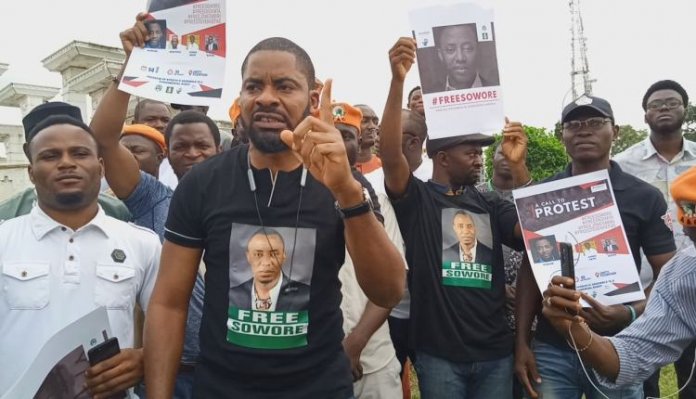 There was palpable anger yesterday as operatives of the Department of State Services (DSS) fired live ammunition at protesters and journalists covering a peaceful protest organised by a group, Concerned Nigerians, calling for the release of detained Convener of #Revolution Now Movement, Mr. Omoyele Sowore.

The protest, which took place at the headquarters of the agency, was disrupted when operatives of DSS stormed the place in a Hilux Van shouting “kill them, kill them” and brutalised journalists, including Arise cameraman, Mr. Stanley Ugochukwu.

They subsequently started shooting sporadically into the air and fired tear gas canisters at the gathering, forcing protesters and journalists to scamper to safety.

Sound of gunshots was intermittently mixed with kicks and punches as the operatives descended on protesters and journalists.

As protesters and journalists covering the protest ran to take refuge inside a luxury bus, popularly known as el-Rufai Bus, parked nearby and used to convey the protesters, the operatives, who had cordoned off the entire area, moved to the bus and smashed the glass windows, dragged those hiding  under the seats and beat them mercilessly.

Many journalists were brutalised while their camera and other equipment were seized.

Arise TV cameraman, Stanley Ugochukwu, was brutalised while his camera was snatched by the operatives.

DSS was yet to release the camera as at the time of filling this report.

Reporters and cameramen working with The Guardian and Sun Newspapers, Mr. Oludare Richards and Mr. Muda Atanda, respectively, were also beaten to pulp.

Director of Enough is Enough, Ms. Yemi Ademolekun, an analyst with Arise News, was assaulted by the DSS. Her phone was seized and smashed.

Ugochukwu, in an interview with THISDAY, narrated his ordeal in the hands of the security agents.

He said:  “While we were there, a Hilux van ran into the crowd and the next thing we heard was kill them, hit them, and then we started hearing gunshots.

“They were also firing tear gas canisters and pepper spray and we all scampered to safety; but before that, they had cordoned off the area. Anywhere you turned to, you either met an operative, a power bike or a Hilux van.

“I made for the bus where I hid. I saw a Galaxy TV reporter lying flat under the seat.

“Later, when the gunshots had stopped and I tried to tip toe out of the bus, I heard a voice say ‘stop there!’ I had my camera but I didn’t know that it was recording so he said ‘so you have been recording us?”

“He pointed a gun at me and dipped his hand into my pocket and picked my identity card. He collected my camera and I was pleading please don’t hurt me.

“Somebody who was passing said ‘look at what you are doing to journalists and they pounced on him and beat him to the point that he was bleeding all over.”