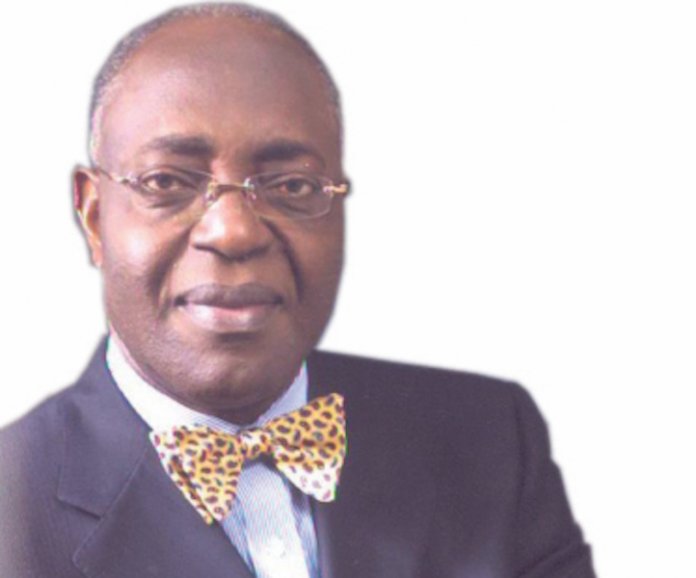 His mien signposts everything desirable. His gait is of royal gracefulness. His professional and educational career is enviable. Few men are as humble and down-to-earth as Chief Raymond Hemen Ihyembe (Tor u Tiv of Benue), who turned 70 recently. In this interview with THISDAY, Chief Ihyembe, former Afribank MD and current Vice Chairman of the International Chamber of Commerce (ICC) Nigeria, with international head office in Paris, talks about his life, achievements, and family

In the life of men, the 70th year is considered a very special number and only a few people attain that number of years in good health and a sound mind as you have. Can you describe how you feel at this very special age and what is the philosophy or secret to attaining such a special age?

First of all, I give thanks to God for having lived this long to see my 70th birthday and in good health, too. It’s entirely by his grace. I also give credit to the loving family I have… My dear wife, Chief Mrs. Obiageli Nwakaku Ihyembe, and my daughters, Mrs.Ngover Ihyembe-Nwankwo; Mrs. Wandoo Ihyembe-Hassan; and Dr. Demvihin ( Dem) Ihyembe. They have wrapped me in love completely over the years.

Even during periods that I was ill, their love and commitment to caring for me and nursing me back to good health never wavered. One other factor has also been the fact that I have kept very busy working since I retired from the then Afribank Nigeria Plc, 17 years ago. This has kept me physically and mentally quite alert. Having good and trusted friends as I have got older has also helped to keep depression at bay. I have known most of these friends for over 50 years and we know ourselves.

You are the seventh child of your father and the last of your mother. How has this impacted on your personality?
Being the seventh out of my father’s children and the last of my mother’s children did not confer any special status on me. But, overall, I was very close to my father even before I started my primary school education. Our father was very aware of and quite focused on the benefits of Western education and kept preaching the virtues of being literate and educated to all of us. It was, therefore, quite natural that he would send his children to school, at a time many parents in our corner of Nigeria had not realized the value of education.

Tell us a bit about your background: how you became a banker and in the years since you left, what do you miss most about banking?
I completed my primary school education at the Tiv Native Authority Primary School, Gboko in 1963. Thereafter, I proceeded to the famous Barewa College, Zaria for my secondary education. After completing my secondary school education at Barewa College, I proceeded to another equally famous secondary school, the Federal Government College, Warri, in the then Mid-West state of Nigeria for my higher school certificate. After I retired from the banking sector in 2002, I have since moved on to new challenges.

Barewa College in Zaria where you had your secondary school education is known to have produced several persons of great import in different industries. Would you say this defined your path in life?
While at Barewa college, one was naturally very aware that the school had produced very famous and illustrious personalities. It was not the fact that it produced so many important personalities that influenced me but that these ‘old boys’ were people of very high integrity and who were very humble and focused on serving rather than being served, and who gave their all to serve their country. These moral qualities of the illustrious products of Barewa college impressed me and, perhaps, formed my character.

However, my path in life was not really determined by the lives of these people, although I admired such illustrious alumni of the college. I was more inclined and stronger in science subjects and therefore wanted to be an engineer. I subsequently trained as one and practised the profession for a short period before I became a banker, purely by fate.

You retired at 53. It’s not usual for people to retire at that age in this part of the world. What great planning skill did you deploy or was it just good fortune considering the fact that the bank attained some of its best achievements under your leadership?

I took over the running of Afribank Nigeria Plc at a difficult time when the staff were disgruntled, the unions had virtually taken over the institution, non-performing loans were growing and there was all manner of politics going on within and outside the bank. I gave a lot of credit to the staff who believed in me and stayed the course with me. With their support, we were, by 2002, able to produce the best financial results the bank ever had in its history. Unfortunately, due to a lack of good corporate governance practices, not long after I retired, the bank failed seven years after my retirement. Of course, a bank can fail within 12 months, if not prudently managed.

You have been married for more than 43 years to your wife, Chief Mrs. Obiageli Ihyembe. You have a great family life. Given the requirements of banking; how much time and hard work it takes to rise to the zenith of a banking career, how were you able to raise a successful family? We asked because we know at what level your three children operate: Ngover, a seasoned corporate banker, Wandoo, a strategy manager in the oil and gas sector and Demvihin, a medical doctor and associate professor.

That I have a fantastic and loving wife and absolutely incredible daughters, Ngover, Wandoo, and Dem, I give glory to God. Forty-three years is a long time. But, it’s also like yesterday. Time has passed so quickly because we have lived well and have a loving and peaceful relationship. The same time frame would have seemed an eternity if we were not living well or in peace and in love. It does not mean we don’t disagree. But, it means we have learned about each other and are patient and forgiving and have also learned a lot more about life. So, I can say we have learned to tolerate each other’s idiosyncrasies. That’s the key to having a long marriage…. tolerance of each other.

You are known as a philanthropist with a lot of contributions in the development of several people through scholarships and fellowships as well as the transformation of schools, community centres, churches, and even companies. What fulfillment do you derive from that?
My philanthropic activities and giving to others and society, in general, give me a lot of satisfaction. This is because no one makes himself or herself what he or she is or has become in life. Even Sir Isaac Newton was taught and nurtured by his teachers. All great men and women are made by others, no matter how humble! At one point or the other, someone somewhere must have sacrificed and given love or material things to ensure that one made progress in life. So, as I drank from other people’s fountain of love, it is only natural that I should also give unto others who are in need.

At the height of your career, you facilitated the entry of a lot of young people from Benue and other states into the banking sector. Given the number of those admitted then, there is a noticeable dearth in Benue talent in the banking sector at the highest levels. Did something go wrong? Is there something youths from that region should be doing differently?
Yes, I facilitated the entry of quite a number of Benue young men and women into the banking industry while I was still working. Sadly, there are not too many left in the industry today. I am yet to fathom the reason we don’t have many of them in top management positions within the industry. But, I believe those of them that are still in the Industry will eventually get to the top if they persevere and continue to work diligently and are focused on excelling in their various fields.

You have a lot of admirers and young people who look up to you. Is there a philosophy of life, a message about life that you want them to focus on?
My message to young people is that the world out there is large and they can realize their dreams in the global space offered by today’s globalized economy. They should, therefore, train themselves to excel in their chosen fields. By doing so, they will see opportunities out there that they never thought existed before. They should also seek to become entrepreneurs, as this is the sure way of becoming financially liberated. There is no magic wand or keys to success. On the whole, there could be many factors that are responsible for an individual’s success in life. But, cutting corners and magic are not part of them.