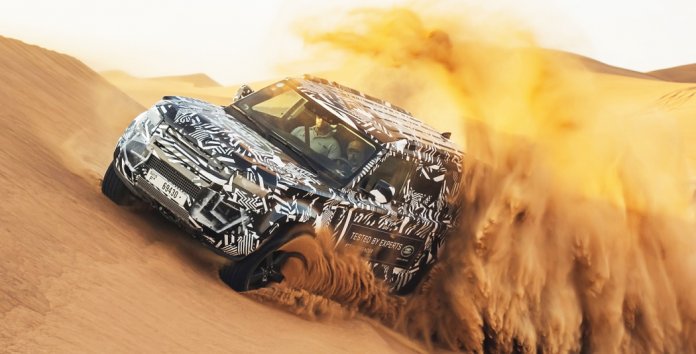 After successfully reaching the African continent’s most easterly point in war-torn Somalia as part of the Extreme East Expedition in 2017, then covering over 17,000km on journey from Cape Town to Kathmandu last year, the Kingsley Holgate Expedition team’s two Land Rover Discoverys have now safely returned to South Africa from their toughest expedition yet.

The recently completed Zambezi-Congo Expedition began in Chinde, Mozambique in the vast, 18,000km² Zambezi Delta where, as tradition dictates, the Holgate expedition team filled their symbolic Zulu calabash with Indian Ocean seawater from the mouth of the Zambezi River.

Using two expedition Land Rover Discoverys, the geographic challenge of the journey was to cross Africa from East to West across Mozambique, Zambia and the Democratic Republic of Congo to the mouth of the world’s deepest river, the Congo. Averaging sometimes only around 50km a day, the team fought its way over 2500km in 4-wheel drive low ratio negotiating 3m-deep mud ruts, trenches, powder-soft sand, and treacherous potholes to cover more than 10,000km of some the worst conditions the team has conquered yet.

“We’ve talked about this east-to-west crossing of Africa for years and now it’s happened,” said Kingsley’s son and Expedition Leader Ross Holgate.  “With more than 80,000 hard-earned kilometers already on the clock, it certainly put these much-travelled Discoverys to the ultimate test. The journey across the DRC was an absolute hell-run – a graveyard road littered with vehicles that had previously attempted this challenge.

“The roads, or lack thereof, weren’t our only challenge. We also faced the very real threats of Ebola, malaria, dengue fever and rebel activities. There were some tough geo-political pressures especially with the latest xenophobic attacks in South Africa and threats of reprisal against the expedition team, which endangered the journey.”

As is the case with all their expeditions, the team carried a Scroll of Peace and Goodwill and collected hundreds of messages of support from health workers, chiefs, ambassadors and residents along the route.

Finally, after nearly eight weeks, the vehicles rolled into the port town of Banana and the symbolic calabash of water from the mouth of the Zambezi was emptied into the Congo River.

“We believe these to be the most travelled Land Rover Discoverys in the world,” said Kingsley Holgate, Africa’s celebrated explorer. “Having safely taken us to the dangerous Horn of Africa, shortly followed by a transcontinental odyssey through 12 countries and more than 17 000km on our Cape to Kathmandu mission, these vehicles have certainly earned their credentials.

“More recently, we’ve used them on a number of humanitarian journeys close to home, including the distribution of over 15 tonnes of emergency supplies to flood-stricken communities surrounding Gorongosa National Park in Mozambique that were hard-hit after the devastation of Cyclone Idai. Just ahead of our east-to-west Zambezi-Congo Expedition we also completed a successful ‘Vision Mission’, helping to screen more than 1,300 patients in need of urgent eye care in the Zambezi Delta.”

“This world-first humanitarian and geographic Land Rover expedition means the culmination of the toughest three-year test of the new Discovery ever undertaken.

This was the perfect way to demonstrate Discovery’s capabilities and celebrate the 30th anniversary of the Discovery brand,” said Tina Pienaar-Smit, Jaguar Land Rover South Africa and sub-Sahara Africa PR and Sponsorship Specialist.

Since departing on their first expedition three years ago, the two Kingsley Holgate Discoverys have each clocked over 100,000km of torturous geographic and humanitarian work throughout Africa, the Middle East and Asia.

The vehicles have been tested to the extreme, often beyond the limits of specification with near 500kg loaded onto the roof, depths of well over 1m waded and 12 passengers loaded in emergency situations.