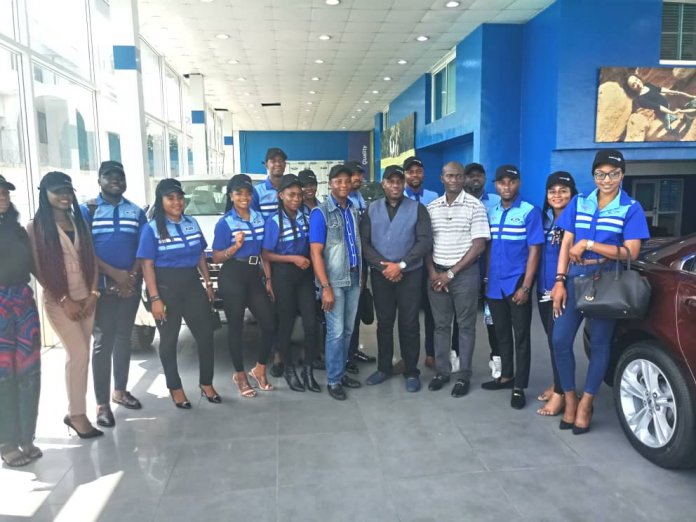 Contestants from the ongoing entrepreneurial reality TV show, The Next Titan on Friday 8th November 2019 paid a courtesy call on Coscharis Motors at their Ford office in Victoria Island, Lagos.

While welcoming the contestants on behalf of the company, Abiona Babarinde, General Manager, Marketing and Corporate Communications at Coscharis Group said, “We are excited to support the Next Titan reality show once again. Henry Ford once said that a business that makes nothing but money is a poor business. Therefore, Coscharis aligns with Ford’s objective as a corporate citizen to support Nigeria’s upcoming business owners with entrepreneurial skills that will make a contribution towards the economy and for them to lead by example.”

Coscharis Motors Plc, the sole official distributor of Ford vehicles in Nigeria and Ford Motor Company are the official automobile sponsors of the entrepreneurial reality TV show, for the fourth consecutive season. “Since inception of its participation in Next Titan, Coscharis Motors and Ford are proud to have given previous winners, over the past four seasons, Ford vehicles to help run their business. This year, the business will continue the momentum and give the winner of Season 6 a brand new Ford Figo.” said Babarinde.

The Next Titan, now in its sixth season, is a platform for young entrepreneurs to demonstrate their talent in business.

The primary purpose of the programme is to challenge the public’s perception of entrepreneurship, to awaken the nation’s entrepreneurial spirit, to inspire contestants and viewers to strive for success in business, and become masters of their own destinies.

After a grueling screening process which saw thousands of young entrepreneurs between the ages of 21 and 40 compete for a chance to get into the “House”, sixteen participants emerged and have been doing battle in various business tasks, such as strategy, sales, marketing, and promotions. During the competition, participants and viewers get exposure to real-life entrepreneurial challenges through informal training, and a chance to learn from top business leaders. At the end of the contest, only one will emerge as The Next Titan.

Babarinde went on to say, “Coscharis Motors wishes all participants the best of luck for the competition, We believe that the current contestants will both inspire young entrepreneurs, and educate society on just how much hard work goes into growing a business. They will push themselves to the limit, digging deep into their minds to discover and exhibit their true entrepreneurial potentials. According to Dr Cosmas Maduka, founder of Coscharis Group, we really don’t know who we are until we see what we can do.”

“Remember, while each and every one of us has the power to impact someone’s life and make the world a better place, it is in combination with the ongoing efforts of others that the collective impact has the potential to be really profound,” Babarinde concluded.

Mide Kunle-Akinlaja the Executive Producer of the show who led the contestants to Coscharis Motors, while thanking the organizations for their support said, “Participation in the reality show year after year only demonstrates Coscharis Motors’ and Ford’s commitment towards emerging entrepreneurs.”