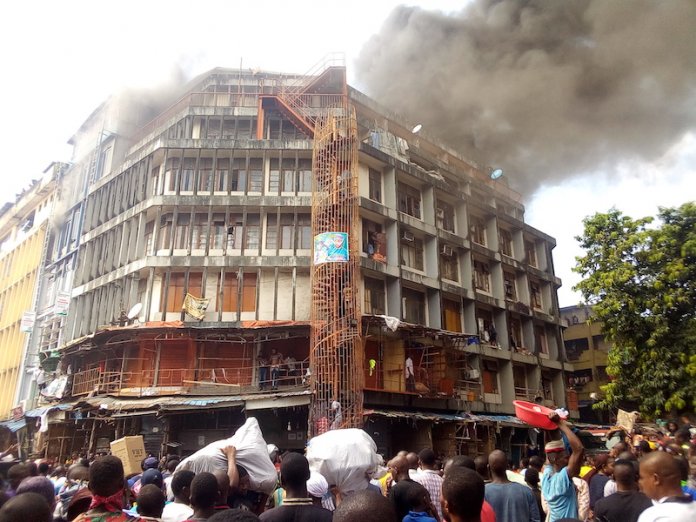 Although no casualty was recorded, the fire destroyed goods worth millions of naira before firefighters arrived to put it out.
Billows of smoke from the fire continued to emanate from the burnt buildings as at press time.
The cause of the fire was yet to be ascertained, but eyewitnesses said it started from one of the shops in one of the high-rise buildings before it spread to others.

As at the last count, some traders claimed over 100 shops were gutted as the fire spread to other shops given the highly inflammable materials such as wears, air conditioners and generators filled with fuel that were being sold in some of the shops.
While some traders succeeded in salvaging their goods initially when the fire began, others were not as lucky as hoodlums and the fire frustrated their efforts.

Also, initial attempts by people to quench the fire proved abortive as the flames proved stronger than the buckets of water thrown at the fire.
While the fire was raging, some hoodlums were more concerned with robbing the stores of the stocked goods despite efforts by the operatives of the Rapid Response Squad (RRS) to stop the looting.

Confirming the incident, the Lagos State Emergency Management Agency (LASEMA) General Manager, Dr. Femi Oke-Osanyintolu, said the emergency responders were able to put out the inferno due to swift response.

He said the fire was exacerbated by combustible materials stored in the building.
“The Lagos State Government is committed to protection of lives and property of citizens and would not leave any stone unturned to ensure that.
“We are going to launch a holistic investigation into the cause of this inferno with the aim to prevent future occurrence and sanction offenders appropriately to serve as deterrence to others,” he stated.