The Peoples Democratic Party (PDP) is yet to decide on the zone it would allot its 2023 presidential ticket, the National Publicity Secretary, Mr. Kola Ologbondiyan, said yesterday in Abuja.

The party at a press conference also said there was no division within its elected governors, adding that enemies of the party were envious of the rising profile of the Governor of Rivers State, Mr. Nyesom Wike.

It described reports in a section of the media suggesting that the party plots to retain its presidential slot in the North-east and South-east, as merely speculative.

“Moreover, it is also imperative to counsel, without any equivocation, that enemies of our party, who feel threatened by the rising profile of Governor Nyesom Wike, should have a rethink on their incessant attacks on the governor,” it stated, adding: “The PDP appreciates the contribution of Governor Wike, as well as all our governors, to the growth of our party and urge all members and supporters to ignore those seeking to cause disaffection in our ranks.”

The main opposition party described those behind the reports as political terrorists whose plan was to mislead the public and cause disaffection within the ranks of the party with the hope of using such fabrications to further their own selfish political ambitions.

The party said: “The PDP states categorically that our governors are not divided along any lines of ambition towards 2023, neither is there any plot to stop the ambition of any of our members.

“For the avoidance of doubt, our party is yet to discuss the 2023 presidential election, overtly or covertly, at any time whatsoever.

“If anything, the PDP is currently working with Nigerians on how to win its elections in Kogi and Bayelsa States and will not be distracted by individuals who found themselves operating in the highest offices of the land but failing in governance.

“As a party, we are also working with our respective state governors and legislators across the country as they work hard, in line with the manifesto of our party, to improve on the welfare and development of Nigerians.”

Meanwhile, PDP has also demanded an unconditional release of those it described as innocent Nigerians, including its Head of Security in Dekina Local Government Area of Kogi State, Mr. Edeh Abutu, who was allegedly abducted by the All Progressives Congress (APC) on trumped-up charges and  taken to unknown destination where they were believed to be under torture.

Ologbondiyan said: “the APC, out of desperation, has started framing and arresting innocent Nigerians, harassing and victimising women and youths, blocking peoples’ means of livelihood and issuing threats on the citizenry, all in the failed bid to inject crisis, derail the electoral process and manipulate the outcome of the polls.

“Only yesterday, the APC, using, some hoodlums and compromised security agents, led by Bello’s illegitimate deputy governor, Edward Onoja, arrested the PDP head of security in Dekina Local Government, Mr. Edeh  Abutu, over trumped up charges of possession of firearm.

“It is instructive to state that Abutu had been threatened with arrest and frame-up, several times by the APC; attacked and harassed on numerous occasions before he was finally framed and abducted by the APC after he pulled a gargantuan crowd for our governorship campaign rally in Dekina.”

The PDP accused Onoja of trying to frame its party member, saying: “Information at our disposal shows that at the time the illegal deputy governor was publicising his fabricated confessional statement, there was no such record with the Police in Dekina or the State Police Command.”

It also accused the APC of plotting to frame-up other PDP leaders over allegations of illegal possession of firearm, sponsoring of violence, training of thugs among others, all in a desperate bid to win the November 16 governorship election in the state. 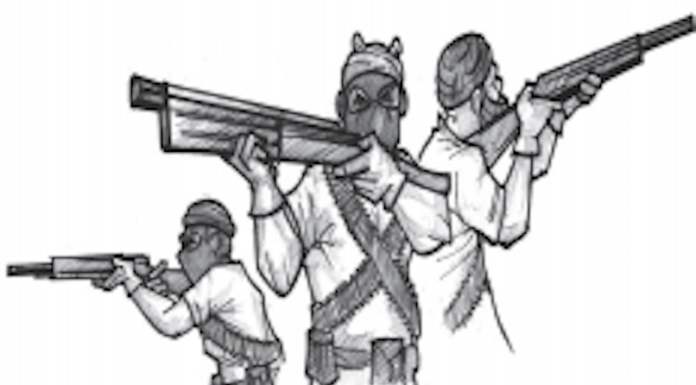