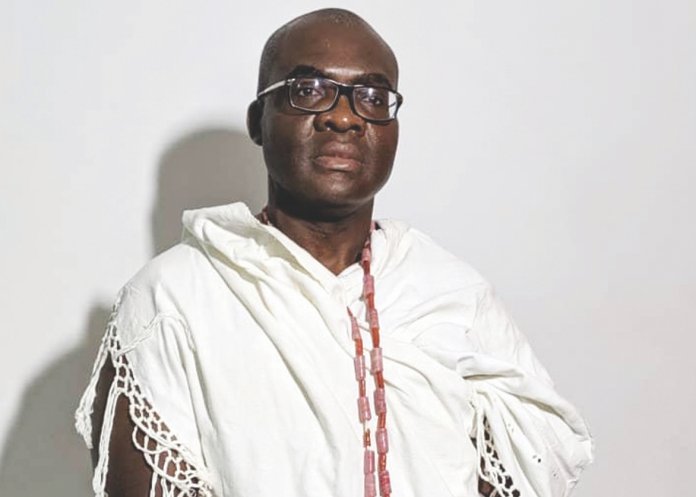 His Royal Majesty, King Ifechukwude Okonjo, the new Obi of Ogwashiukwu, Delta State, who doubles as the Managing Director of Chevy Chase Limited (a financial advisory firm based in Lagos) and son of the late Obi (Professor) Chukwuka Okonjo spoke with Chris Asika about his life, career and journey to the throne. Excerpt

My late father was not just a teacher

My childhood days were all about intellectual competitions, especially when you are privileged to have two lecturers as parents. My late father Prof. Chukwuka Okonjo was not just a teacher but a motivator orchestrated by his coaching technique. Growing up in an academic environment like University of Nigeria, Nsukka gives you the privilege to interact with other lecturers and their children. Imagine having to interact with great academics like Prof. Chinua Achebe, Prof. James Ezeilo, (former Vice Chancellor of the University) and the rest. They are not astronomically wealthy in material things, but academically rich. That is the environment I grew up in and the setting was all about excellence.

Ghana was where I learnt tolerance

I was born in Enugu on June 1967, but had my primary school in Nsukka where my father was lecturing as at that time and later moved to Legon in Ghana in 1974 were I completed my primary school in 1979. As a child of two lecturers, we are used to moving from one place to another because of my father’s work schedules in different academic institutions he had to lecture. Ghana was where I had my formative years; where I learnt tolerance and a different view of the world having to stay with people of diverse culture and languages. I learnt that Ghana is matrilineal in their culture because women are the drivers of the society unlike Nigeria where our culture is male-oriented. My father also worked with United Nations in Ghana and this also gave me and my siblings an opportunity to interact with the children of UN staff in Ghana where I became very docile. We moved back and forth between Nigeria and Ghana.

In 1979 I was sent home to Nigeria to study at Federal College, Enugu, in Eastern Nigeria. The school which was a very beautiful school was known for its highly competitive academic excellence as at that time  (reason my parents opted for it) it took me time to adapt but during my 2nd and 3rd year, I was already at home with the school.

My mum has always been a strong pillar

My mother was one of the first women to bag a PhD in Nigeria. My mother had her PhD in the United States aided by University of Nigeria Nsukka to study Sociology. My mum has always been a strong pillar of my family supporting my dad all through since she is also an academic and just like my dad, she travels to and from one institution to another carrying out researches and going on sabbaticals from time to time. Their union is one of a kind. Both were my first role models in life. My home was a typical classroom where academic work was just like every other household chores. At one point, I felt it was just a normal thing obtainable in other homes. My other teacher was my elder sister, Dr. Ngozi Okonjo-Iweala. She, just like my mum, would mix family dinners, breakfast or lunch with tutorials. It was fun those days.

My parents are my first role models in life

Just like I said earlier, my parents are my first role models in life. My father taught me something about set values and intellectual competitions. He was not interested in academic grades, but he initiates the process of crystallisation of knowledge. His emphasis is for you to ‘do the work and do it well; grades are just the crowning of your efforts’. It has affected me profusely because knowledge is the application of what is tested in the classroom. The process is the residual knowledge; the Intelligence Quotient (IQ) and Emotional Quotient (EQ).

The most successful people are not necessarily the brightest especially those who have other skills as an added advantage. Life is not a bed of roses; whatever results you get in life is how you react to what happens to you. Life is a process of default.

I had two bachelor degrees in Economics and History from the University of Maryland, United States of America and subsequently bagged an MBA from the University of Edinburgh in Scotland.  I worked with Haliburton from 2001. I felt I did not like the way Africans were treated and I revolted. I took the company to court and I had an out of court settlement deal by my lawyer, Mr. Etigwe Uwa that gave me good money and I decided to invest in haulage business. As at 2004, I had built my first house in Igbuefor, Lagos and three trucks. I became bored doing the same routine job that is not intellectual in nature. I felt I have made enough profit so I sold off my trucks and went into partnership with my brother, Mr. Chukwuelozie Okonjo, who had a career with Arthur Anderson LLP, a world class accounting/auditing firm. Together we founded George Town Consulting Ltd, a trade finance consulting firm. I was in charge of business development, while my brother was in charge of analysis and strategy. He is a very brilliant person with an MBA degree and we started with big jobs.

My high and low moments

My low moments are when you have to deal with the fact that you have no control over issues especially when people sabotage you and get jealous of your achievements. I cannot necessarily say that I merited what I’ve achieved but things come to me naturally. Sometimes when transactions don’t go through, some people get resentful, but I and my siblings were taught by our father to be multi-tasking. It is better to get one per cent of something large than 10 per cent of something small. Another low moment is when you don’t get paid after doing a job; people tend to fight you so as to avoid paying you. I don’t look at what the other man has, we all have different race. To some, it is sprint to the finish line, while others, it’s a marathon.

Highest moment of my life is when I spend time with my family. I grew up in a very close family. I have four daughters and my wife. She comes from a very similar background. She went to Queen’s College, Lagos. She has the same value set with me and my best support.

I enjoy exercising four to five times a week; I enjoy running 50km a week. I enjoy healthy meals cooked by my wife. I love vegetables with shredded chicken, grilled fish and lots of fruits like pawpaw, water melon, oranges etc.

Journey to the Throne

The death of my father is one of the most painful experiences. He never wanted to be a burden to anybody. He had pneumonia and he knew he could live for more time but he gave instructions for his oxygen to be removed so nature will have its way. Watching him reminds me of my own mortality. He taught us to enjoy whatever we have. He did everything for us his family, made huge sacrifices, and gave us the best. If I could take anything from him, I will take his brain.

A man who gave me so much, I come from a family of stars, extremely brilliant siblings who gave me love and care I am the fifth child and the third son which naturally should not place me to ascend the throne of my father. But be it as it may, my eldest brother who would have naturally taken after my father, Mr. Chukwuma Okonjo is not fit health-wise, while Mr. Ikechukwu Okonjo, a lawyer with EFCC, who is also a pastor decided not to take the throne because of his beliefs which naturally made me the man for the job. I told myself as an African, let me discover the process; I believe that institution can be mordenised. My contribution is to develop that place to a flat structure were every person will participate actively.

My plan is to set up committee to ratify the institution and set up an advisory board from all parts of Ogwashiukwu. I believe the Obi is the Chief Servant. I will bring on board my skills set to play. I will lay institutions that will deal with issues of developments; land issues, youth employment, healthcare, education, agriculture and spin offs that come from this, setting up of information and communication technology (ICT) centres for children, sports facility for the youths as an avenue of expression like basketball, volleyball, fitness gym and weight lifting. For agriculture, we will push animal husbandry, rabbit farming, goat farming, new breed crossing with local breeds to improve the quality of meat, establishment of cooperatives like rice, palm plantations, banana etc. and creating food processing plants that will deal with yam, cassava for export market. Empowering the youth as a force in agriculture

We will promote our culture by building our own MUSON centre, transforming Ogwashiuku from a passive recipients of disperse benefits into active agents of change and building road networks through direct labour. The question is: what can we do together to transform Ogwashiuku? I see an Ogwashi with a television /radio station, university, as we already have a polytechnic with over 18,000 students.

All this I will achieve using models I learnt from my late father. Development can only occur in rural communities organically from within by harnessing the latent potentials of the said community by converting passive recipients of disperse benefit into active agents of change.