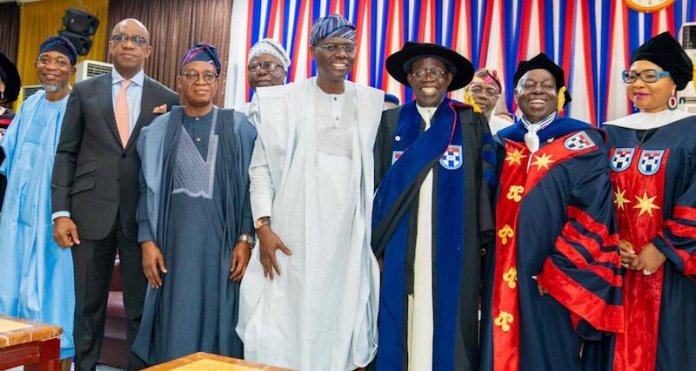 If the pace of life in Ado Ekiti, the capital of Ekiti State, is typically slow and sedate, the presence of top politicians and industrialists in the town revved things up plenty notches on October 21. That day, the National Leader of the All Progressives Congress, Asiwaju Bola Ahmed Tinubu, was conferred with an honorary doctorate in Public Administration at the Afe Babalola University, Ado-Ekiti alongside the Obi of Onitsha, HRM Igwe Nnaemeka Achebe and the Sultan of Sokoto, Muhammadu Sa’ad Abubakar.

As one of Nigeria’s most redoubtable politicians, a former senator and two-term governor of Lagos State; not forgetting his contributions to the emergence of the APC as Nigeria’s ruling party, there was no doubt that many beneficiaries of his goodwill and political protégés would storm the town to solidarize with him. And they came in colourful numbers.

Governor Dapo Abiodun led his Lagos State counterpart, Babajide Sanwo-Olu, and other dignitaries like the Minister of Interior, Ogbeni Rauf Aregbesola; former Minister of State for Defence, Senator Demola Seriki; and Senator Tokunbo Afikuyomi among others to the Seventh Convocation ceremony of ABUAD, which within the last decade has emerged the fastest growing citadel of learning in Africa and a beacon of excellence for moral rebranding and research. Owned by a foremost Nigerian lawyer, Chief Afe Babalola, ABUAD, indeed, listed to the political presence of Tinubu and his powerful associates.

In his goodwill message, Governor Abiodun wrote, “I join every Nigerian to congratulate a great political leader, Asiwaju Bola Ahmed Tinubu on the conferment of the Doctor of Public Administration (Honoris Causa) by the Afe Babalola University, Ado Ekiti. The doctorate is well-deserved, considering Asiwaju’s track record as a seasoned administrator, politician, and leader. It is my prayer that the Almighty will continue to be with the National Leader of our great party, the All Progressives Congress (APC), as he receives this honour for his strides in nation-building.”

According to the institution’s Acting-Vice Chancellor, Prof. Smaranda Olarinde, the awardees were carefully chosen based on their indelible marks on the sand of time and their contributions to nation-building and humanity.

“They deserve to be celebrated. The beauty of honourary degrees is that they are awarded to persons who are deserving of such honours having excelled in character and useful application of such intellect and academic excellence. In many cases, honourary degrees are rated higher than the degrees we all study to obtain since so many parameters are considered before they are bestowed on persons deserving them, so the persons we chose deserve to be celebrated,” she said.

Particularly, Prof. Olarinde said Tinubu was not chosen on the basis of his soaring political credentials because ABUAD was not a political entity; but that the APC leader was considered worthy because of his integrity, patriotism, selflessness and unparalleled selfless services to humanity and nation-building.

She added that Asiwaju Tinubu helped thousands to rediscover lost destinies and gave hope to the hopeless while providing a compass for those wandering in the wilderness of difficulties and uncertainties.
“We didn’t consider Senator Bola Tinubu owing to political career but he was only found worthy because of his immense contributions to humanity and various selfless services that surpass that of anybody in Nigeria,” Olarinde declared.