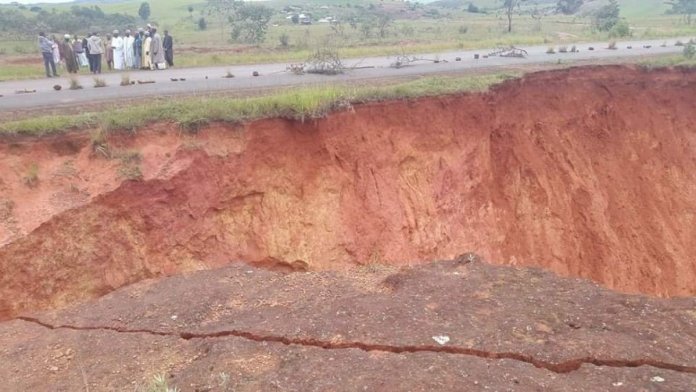 Ubahu village in Nanka community of Orumba North Local Government Area of Anambra State has suffered a major landslide, leading to loss of homes and farmlands.

THISDAY gathered that the village, which habours multiple gully erosion sites, erupted on the morning on October 15, following heavy rainfall, sending residents of the area scampering to safety.

The multiple eruptions were said to have damaged farmlands, homes, major access roads and economic trees.

“It also brought down electric power lines. The main access road to neighboring Umudala village from Ubahu village was severed,” a source said,

THISDAY gathered that after the incident, the indigenous clan members resident in the area have abandoned their homes and farmland lands for safer areas of the community.

Members of late Francis Eze family, who are said to have a home near Obeagu gully erosion, have fled their home, including other families.

Mr. Ikenna Ezenekwe, an indigene of the area and an environmental activist said: “During the Peter Obi administration, in the rainy season of 2008, Governor Obi paid a visit to Obeagu gully erosion following a previous landslide which swept the home of Madam Bridget Eze.”

According to him, “Governor Obi made the pledge to assist the people of Ubahu village to ameliorate the fast growing gully erosion. The former governor promised to construct gutter channels to control the storm flow. The gutters have yet to be constructed.

“In 2010, the gully became more aggressive as a result of increased unregulated storm flow. Within the short period of 2009 to 2019, Obeagu gully erosion doubled its original size.

“In their efforts to ameliorate the growing disaster, the village leaders took up self-action. They started by providing land for some of the families that lost their lands. They embarked on opening another access road to Umudala village and to install new electric power lines.

“But the fear of further landslides remains a constant remainder to the villagers. They fear the gully may grow further. They appear hopeless and without help.”

Ezenekwe, a US trained Environmental Engineer and activist who is the Nigerian coordinator of a non-governmental organisation, Rural Community Development Outreach, described the situation as nature’s crime against the people of Nanka.

He said: “With the end of every rainy season, the people of Nanka lose farmlands and homes to landslide. Ubahu Nanka has become the shining beckon of fear and uncertainty owing to abandoned gully erosions that has regained the propensity to erupt into violent landslides. The hopelessness may result to another unpleasant outcome if care is not taken.

“It is time for the Nation Assembly to consider setting up a commission to address this issue – a gully erosion community’s development commission.”

Ezenekwe called on Anambra State Governor, Willie Obiano, to remember the people of Ubahu village in the disbursement of ecological funds, saying Nanka houses the largest and most active gullies in South-east.