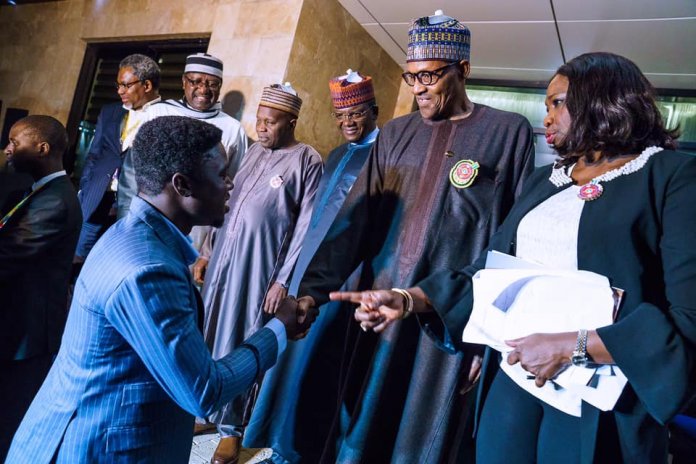 By Omololu Ogunmade in Abuja
President Muhammadu Buhari Friday in Sochi, Russia told members of the Nigerian community that the federal government would protect all Nigerians across the world irrespective of the distance.
“Our government will protect Nigerians at home, and abroad,’’ he promised
Speaking while hosting a gathering of students and professionals in Sochi, towards the conclusion of his three-day visit to Russia, Buhari said “the life of every Nigerian, in every part of the world matters.”
A statement by presidential spokesman, Malam Garba Shehu, said Buhari who had participated in the Russia-Africa Summit, graced by 40 heads of states and governments, told the gathering that the Nigerian Diaspora Commission was established to ensure a forward and backward link for all Nigerians living outside the country.
Shehu said Buhari also told the gathering that the commission was saddled with the responsibility of catering for their safety and needs, and simultaneously providing a platform for many who would like to contribute to the development of the country with their skills, knowledge and resources.
He said the president advised the citizens not to forget home, imploring all Nigerians living in foreign countries to be law abiding and work very hard to excel in their studies and chosen careers.
According to the statement, the president assured them that his administration would always be people-focused, pointing out that all the programmes of the administration had been tailored to buoy the economy and protect the poor and vulnerable.
“We must create jobs to meet the growing demands in the country, and we are looking at agriculture already,’’ he was quoted as saying.
The statement also said Buhari noted that the federal government had introduced Social Investment Programmes to directly impact the lives of poor people.
It also said Buhari briefed his country men about his activities in Russia and prospects of the visit.
“Yesterday I met with Russian President, Vladimir Putin and we discussed some of the areas of shared interest which includes pushing for diversification of the economy in agriculture and solid minerals. Incidentally we have a lot in common.
“Russia exports crude oil like Nigeria, and it is the second largest producer of gas in the world. A lot can be learnt from their journey. We will collaborate in agriculture, oil and gas, and solid minerals exploration,’’ Buhari was further quoted.
The statement added that the Nigerian Ambassador to Russia, Prof. Steve Davies Ugbah, in his submission, said the president had restored the pride of all Nigerians by consistently meeting with citizens in countries he visited.
The statement also said the President of Nigerians in Diaspora  Organisation (NIDO) in Russia,
Chukwujeku Ejike Sam-Fester, in his remarks, said Buhari demonstrated a high sense of maturity and patriotism by visiting South Africa on October 3rd, 2019, to discuss issues relating to attacks on foreigners, including Nigerians, in the country.
“We are proud of you for taking that step to reconcile not only Nigeria and South Africa, but the entire continent,’’ Shehu quoted him.
Shehu also said Sam-Fester urged the federal government to extend to them initiatives such as the National Identity Card, bank verification number (BVN), 10-year validity passport and encourage more participation in governance by inviting professionals abroad to provide services.
The statement also noted that a Nigerian female student, Kadija Mohammed Babanzara, commended the president for government’s consistency in payment of bursaries to students, quoting her as saying, “since you came into power, our bursaries are paid in full and timely. We are grateful.”