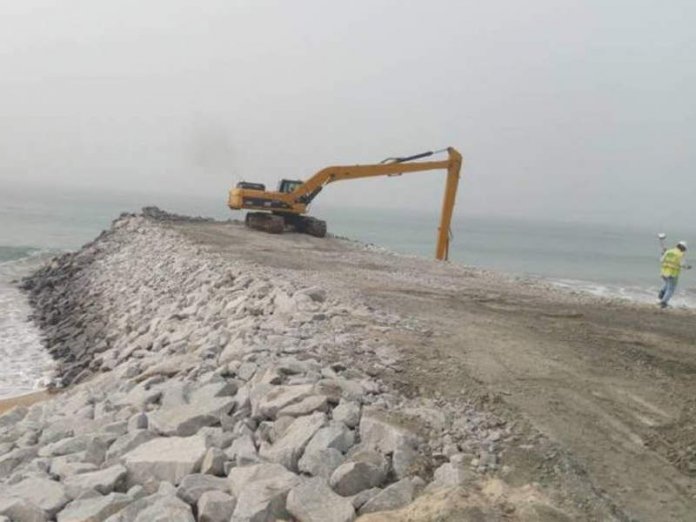 The China Development Bank (CDB) has signed a $629 million financing facility to accelerate the completion of the Lekki Deep Seaport project, which started in 2011.

The loan was secured from the Chinese bank after China Harbour Engineering Company (CHEC), which owns majority shares in the project, signed a 45-year concessionary agreement with Lekki Port LFTZ Enterprise Limited (LPLTZ) to complete the Phase 1 of the deep seaport project.

After completion, the deep seaport would have two container berths of 680-metre long and 16.5-metre water depth. It will also have the capacity to be berthed by fifth-generation container ships, which has a capacity of 18,000 TEU ship.

According to the agreement, in 30 months, Nigeria’s first deep seaport will be delivered in Lekki-a coastal community in the Nigerian commercial nerve-centre, Lagos State.

The state Governor, Mr. Babajide Sanwo-Olu, who witnessed the signing of four agreements yesterday, described the development as “another milestone” for the state in infrastructural development and commerce, saying the signing of the agreements ended a period of uncertainty that had trailed the delivery of the project.

He noted that the completion of the project would invigorate the Lagos economy and push it up in the index of the largest economy in the world.

According to him, “This is a new beginning for us in Lagos. We have achieved another milestone in our efforts to transform the state and accomplish the 21st-century economic ambition. As a government, we are fully in support of the project. We will do all we can to ensure that the terms of the agreements signed today are delivered within 30 months as agreed, and we expect that the outcome would catalyse Lagos as the fifth largest economy and take it up more in the index among the largest economies in years to come.”

In the coming weeks, the governor said more trade agreements would be signed with foreign investors, adding that his administration would continue to explore investments and partnerships that would accelerate growth and benefit residents of the state.

Chairman of the Lekki Port Board of Director, Mr. Biodun Dabiri, noted that the development of the seaport was strategic for the growth of Lekki Free Trade Zone (LFTZ), pointing out that it would make “immense impact” on the country’s economy by creating more than 200,000 jobs and generating about $350 billion in revenue for the state over the period of the concession.

He said: “The loan facility represents a significant milestone, which when combined with foreign direct investment of $230 million through equity injection by CHEC, will ensure a successful delivery of the seaport and reposition Nigeria as the transshipment hub in sub-Saharan Africa upon the conclusion of the second phase.

“The project is strategic for the economic growth of Lekki FTZ, as it would support the massive industrial and petrochemical complex being embarked on in the northern and southern quadrant of the zone with investment over the next three years peaking at over $20 billion.

“With Lekki airport in view, there will be an emergence of a harbour city which would be internationally connected by air and also with world-class integrated transport network of roads, rail and bridges.”

Dabiri said the concessionary agreements had the support of both the federal and the Lagos State Governments, observing that the investors agreed with the terms and conditions laid down by the Nigeria Port Authority (NPA) and Lekki Worldwide Investment.

In his remark, CHEC Chairman, Mr. Lin Yichong, said the Chinese engineering firm took interest to invest in the deep seaport to enable Nigeria strengthen its maritime infrastructure and business by building the first deep seaport that would ease the pressure at Tin Can Island and Apapa ports.

The Phase 1 of the project, Yichong said, would be built with an annual handling capacity of 1.2 million TEU, adding that the capacity would be increased to 2.5 million TEU upon the completion of the second phase.

According to him, “After the completion of the Lekki port, it would become the first deep seaport in Nigeria and the container transportation hub in Africa. It would also release big pressure off Apapa and Tin Can Island ports. In the course of the construction of the project, it is expected that a huge number of employment opportunities would be generated for residents of the state.”

He said the bank considered the investment as a basis for expanding its business in Nigerian and contributing to the development of the country.Managing Director of Tolaram Group in Africa, Mr. Haresh Aswani, on his own, hailed Lagos State Government for supporting the project since the beginning, adding that the completion of the deep seaport would change the narrative of foreign partnerships with the government of Nigeria.

The highpoint was the signing of the four agreements, which was witnessed by the Oba of Lagos, Rilwan Akiolu; Consul-General of the Chinese Embassy in Lagos, Mr. Chu Maoming, and representatives of key stakeholders in the project.

Other agreements signed by the CDB, CHEC, and LPLEL were Completion Agreement, Sponsor Support Agreement and Tripartite Keep-Well Agreement.