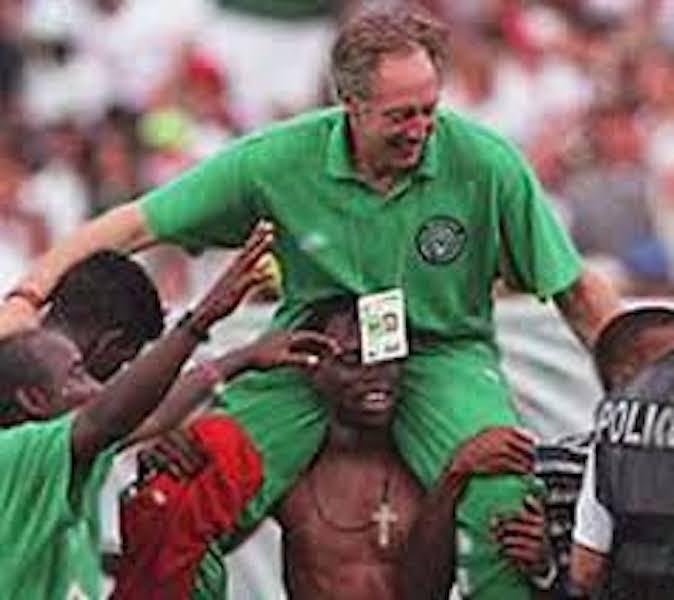 Former Super Eagles Coach, Johannes Bonfere, yesterday debunked the news making around that he is eying a fresh come back to handle the national team again.

The Dutch tactician who piloted Nigeria to win the Olympic Soccer gold at Atlanta 96 Olympic Games told the News Agency of Nigeria (NAN) in Lagos that his frequent visits to Nigeria to watch some games involving the national teams were mere visits because of his love for the country.

Bonfrere was also seen on the stand during Nigeria’s matches at the 2018 World Cup in Russia and watched the Super Eagles play during the African Cup of Nations (AFCON) in Egypt.

The Dutch tactician, who took over from his boss, Clemence Westerhof, also came to cheer the home-based Super Eagles up at the Agege Stadium last Saturday in the reverse fixtures with the Hawks of Togo.

Bonfrere said that the visits were not to seek any coaching job.

“I am in Nigeria to follow some football games and to see the national team play that is the reason I am always in Nigeria.

“I have yet to think if I will take up any coaching job with Nigeria, that is my stand for now. I love the team and I am passionate about Nigeria,” he said.

On the performance of the Super Eagles Team B that won 2-0 against the Hawks of Togo, which was not enough to cancel out their 1-4 defeat in Lome, Bonfrere said the team lacked technical debt.

“I see that the players are playing very well, but playing too much long balls to the Togolese in their 16 yard box was not too good against a Togolese team with seven defenders.

“If the team is smarter, with the ball, they would have made use of other alternatives because the main striker cannot do anything with his leg which suggested his substitution.

“They should have made use of the flanks instead of the middle to give passes because attacking from a sideline is much dangerous to attack from the backline,” he said.

Bonferee was relived of the national team post in 2001 following a spate of poor performance in the qualifying round of matches to Korea/Japan 2002 World Cup and replaced by his then assistance led by Late Amodu Shaibu who qualified the country to the tournament.