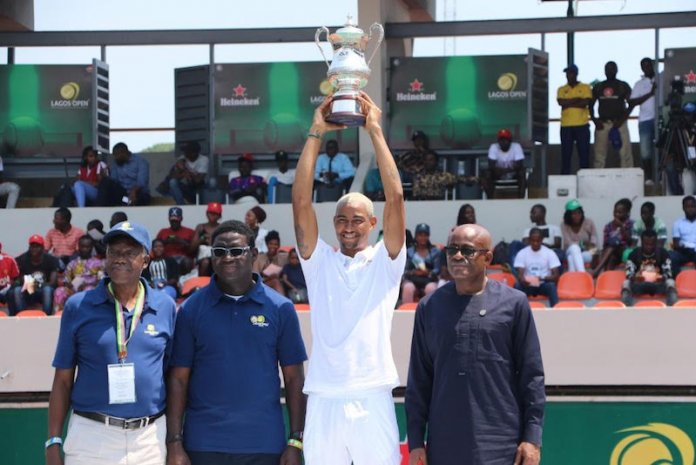 The finals, which was shifted 24 hours because of heavy downpour in Lagos metropolis on Sunday, was the climax of the second leg of the ITF World Tennis Tour at the Lagos Lawn Tennis Club, Onikan.

Frenchman Hemery won the tournament back to back as he was the winner of the first leg. Interestingly, his opponent in yesterday’s final was the same Bosnia Herzegovina opponent Aldin Setkic, who he defeated in the first leg.

The final was an easy one for Hemery as Setkic retired when the game result was 4-2.

To Hemery, whose father is from Edo State, winning the ITF World Tour was a thing of joy for him, adding that he felt elated with the support he received from Nigerian fans, which he described as one of the rallying forces that propelled the victory.

The women’s singles final was a tough match for the winner, Indian Riya Bhatia, who was stretched in the three sets thriller by opponent from Slovenia, Nastja Kolar. The crucial match ended 7-5,1-6,6-3.

Bhatia described her opponent as a good player, adding that it took her determined effort to win the match.
The Governor of Lagos State, Mr. Babajide Sanwolu-Olu, who could not physically present at the finals was represented by the Executive Chairman of Lagos State Sports Commission, Dr. Kweku Tandoh and the Director General, Mr. Oluwatoyin Gafar.

Dr Tandoh paid glowing tribute on behalf of the State government to the Local Organising Committee (LOC) headed by Chief Pius Akinyelure for putting up a good organisation of the competition. He wished all the players safe journey to their respective detinations.