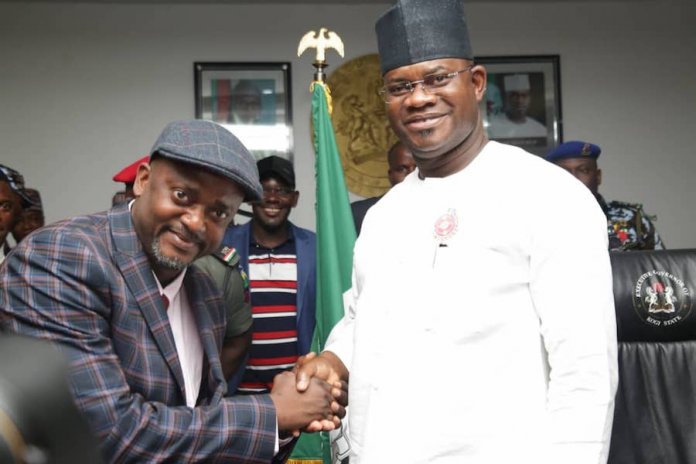 A new Deputy Governor, Edward David Onoja, has been sworn in to replace the embattled former deputy governor Simon Achuba who was impeached by the Kogi State House of House Assembly last Friday.

The Chief Judge (CJ)/of the state, Justice Nasiru Ajanah, administered the oath of office on the new deputy governor at the executive chamber of the Government House in Lokoja on Monday.

Speaking at Onoja’s inauguration at the Banquet Hall, Lugard House, Lokoja, the state Governor, Yahaya Bello, charged the new deputy governor to sustain his quality of service that brought him to limelight.

Onoja’s emergence as the new deputy governor of Kogi State followed the removal of the former deputy governor, Achuba, who was found guilty of gross misconduct by both the state House of Assembly and the Judicial Panel that investigated the allegations levelled against him.

According to Bello, “It is good to be good. My joy today has no bound because the swearing-in of my former Chief of Staff as my second in command is historical. The journey between me and my twin brother, Edward David Onoja, that has brought us to where we are now didn’t just start today.”

The governor expressed optimism that with himself and his new deputy, the state will enjoy more turnaround of its fortunes.

Bello appreciated the courageous stand of the state House of Assembly in doing the needful following due process to solidify the present administration even in the face of all odds.

The governor also commended the state Chief Judge for playing his constitutional role to ensure that there is no vacuum created as a result of the crisis.

The Speaker of the state House of Assembly, Hon. Matthew Kolawole, in his opening remarks during the ceremony, said members of the House after taking a critical look at the report submitted to the House by the Judicial Panel over the gross misconduct of the former deputy governor, found him guilty of the offence that resulted in Achuba’s removal.

The Speaker said that the House also followed due process in the screening and confirmation of the new deputy governor, Onoja, who was appointed by Governor Bello to replace Achuba that was removed.

Kolawole said what the new deputy governor is enjoying presently is as a result of humility and respect for his boss and constituted authorities when he served as Chief of Staff, stressing that with his emergence, “APC overwhelming victory come November 16 governorship election in the state is rest assured”.

Responding, the new deputy governor, Onoja, thanked Bello for finding him worthy for the elevation.

He also appreciated the House of Assembly and the Chief Judge, Ajanah, for standing up to their constitutional obligation under the situation that brought him on board.

Onoja expressed gratitude to God for the mistakes of Achuba which paved the way for his success to the exalted position.

Onoja, who until his new appointment was the former Chief of Staff (CoS) to Bello, is a Graduate of Geology and Mining from University of Jos.