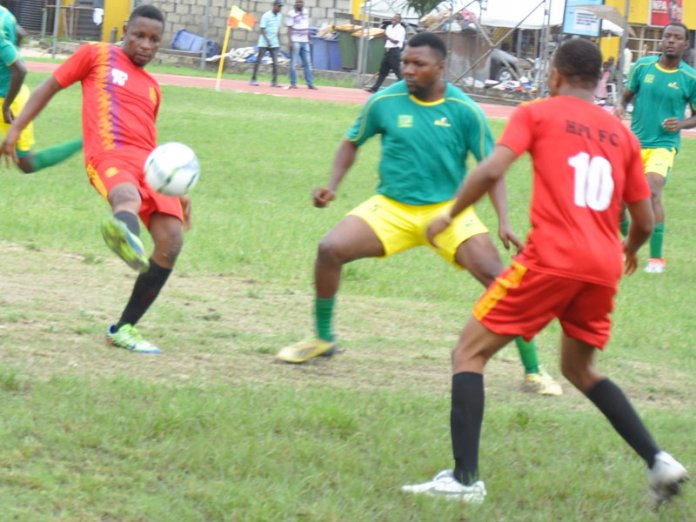 NPA top striker, Mustapha Ashiru scored hat-trick while Bello Haruna scored the fourth goal in the 65th minute of the match. Ashiru’s goals were scored in the 10th, 40th and 60th minutes.

Speaking at the opening ceremony of the competition, which attracted notable industry stakeholders, the Chief Executive Officer of Ships & Ports, Bolaji Akinola, said the idea behind the tournament, which has recorded huge success since inception, is to foster unity and cooperation among industry stakeholders.

He urged the participating teams to ensure fair play and decency in the course of the competition, stating that the tournament is not only be about playing to win but also as an avenue to build friendship.

“The Maritime Cup competition is like the Olympics. The joy is more in participation and not just the laurels at stake. The idea behind it is to bring the maritime industry together and foster healthy recreation among workers.

We are one family in this industry so we need to socialize and interact and play together. That has been the essence since 11 years ago and up till today,” Akinola said.

He noted that the competition in recent years had been devoid of acrimony and unhealthy rivalry associated with most football competitions because of the decision of the organisers to weed out mercenaries.

Akinola, who announced a N1million cash prize for the winner of the competition said the first and second runners-up will win N300,000 and N200,000 respectively.

The participating teams in the competition this year include NPA, HPI, ENL Consortium and Dangote Ports Operation in Group A and the Nigerian Maritime Administration and Safety Agency (NIMASA), Tin Can Island Container Terminal (TICT), Apapa Bulk Terminal Limited (ABTL), and Josephdam Port Services (JPS) in Group B.