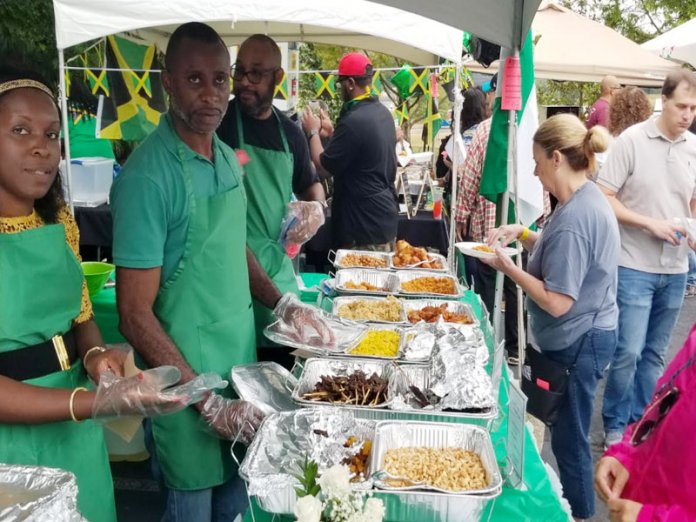 An enriching personal encounter can dispel the shadows of prejudices and build bridges to new understandings between people of different cultures.

It is this recognition that informed some of the aspirations of the Nigerian’s in the Diaspora Organization (NIDO) that, among other things seeks to enhance the image of Nigeria, educate the public at large about the country, and promote the spirit of patriotism, networking and cooperation among Nigerians in the Diaspora.

Consequently, NIDO is always seeking to create or utilize existing programs that will allow it to operationalise these objectives. And one such opportunity that NIDO discovered to transform these aspirations into tangible experiences is the annual International Festival in Spartanburg, South Carolina.

The international festival is an annual event hosted by the City of Spartanburg in Barnet Park to celebrate the diverse global community in the Upstate. As people from more than 75 countries reside in Spartanburg, South Carolina, it offers more than 12,000 attendees a chance to explore the world through food, music, dance, folk art and more. Hence, as this event offered NIDO a chance to give the community a positive experience of the Nigerian culture in accordance with the aforementioned objectives, members of the Greenville, SC Chapter of NIDO joined hands and participated in this event that took place on Saturday, October 4, 2019.

What was NIDO hoping to achieve? According to the President of the Greenville Chapter, Mr. Charles Eke, “we wanted the community to have a positive recognition of Nigeria… by showcasing our heritage through our foods.”

To this effect, NIDO members prepared a delicious bounty of foods for sale that included rice (coconut, fried, and jollof), stewed chicken, puff puff, chin chin, fried plantain, roasted peanuts, akara, suya, and most importantly…smiles!
In this regard, NIDO’s Board of Directors Representative, Dr. Ikenna Onyebueke, explained that the event had the dual purpose of showcasing Nigeria by way of food and culture, “while simultaneously raising funds for the organization”.

On the day of the event, the truth of the saying “many hands make light work”, was exemplified by the joint working of the members whose individual activities, like cogwheels, harmoniously geared into each other in such a way as to visually produce the effect of a finely tuned mechanism. Before the Sun entered the morning, members had entered the tent to setup; as clouds gathered and intermittently disgorged drizzles, members were gathered emitting glee and providing service; and only after the Sun retired from the day did their activities also set.

The enthusiasm was palpable! Animated hands scooped food, carried dishes, high-fived, and collected tickets. Hearts overflowed with giddiness and eyes shone with a brightness that supplemented the missing radiance of the Sun in the cloud-filled lugubrious sky. Then there was the splendid duet of the pleasant attitude of NIDO members and the inviting aroma of the delicious foods that consistently drew patronage from the festival attendees. Charles Eke observed “…a lot of were excited to see Nigeria at the event. We got a lot of compliments about our music that was playing in the background and many questions about where they can continue to get Nigerian foods in the future.” Pausing, he then hinted “… it might be a possible business opportunity for someone.”

Echoing the sentiments, the Vice President of NIDO Greenville, Dr. Ezinma Ezealah, said, “It was encouraging to see different races and ethnicities interested in Nigerian food and even willing to try everything. So, if anyone is inclined to start an elegant Nigerian restaurant in the area, people will definitely be interested.”
Well considered, these thoughts capture ‘objective g’ of NIDO’s constitution that aims to “enhance the image of Nigeria with a view to promoting business, travel and investment opportunities.” The opportunity is there, so who will seize it?

The event went beyond exchanges among adults, for it also gave the children of NIDO members a chance to interact with each other and the broader community. In this way, there was also a generational reinforcement of cultural identity that naturally occurs when a person experiences the rightful position of their own culture in relation to others. Furthermore, observing adults working together to achieve a common goal also set a good example of what is possible on the governance-level of Nigeria.

About the décor, the idea was to form an atmosphere that elegantly expressed the desire to present a refined image of Nigeria. To achieve this, white table cloths with sterling dishes and silverware were used, showing a picture of cleanliness. Members were also asked to dress in their native attire to complement the cultural atmosphere.

On the side not only were there pictures of each food, but technology was incorporated by playing a series of cooking videos that demonstrated how the different foods were made. In this way, those interested in cooking could be inspired to reproduce the foods at home.
Ezealah, who was the designer of the décor added, “I believe it achieved the purpose, and feel people were drawn enough by the elegance of the atmosphere to be encouraged to taste the food.”

Initially there was some doubt that all the food would sellout. But as the day developed, these concerns proved unfounded as reality quickly dispelled it. The patronage was steady early on, but as the day progressed it became increasingly congested like Lagos traffic. The guests came and returned, some for seconds, even thirds. Pans that started full began disappearing. They were
quickly replaced by reserves, but these too met the same fate and joined in the mass disappearing act. By the end of the event, all the food had vanished—the rice (coconut, fried, and jollof), stewed chicken, puff puff, chin chin, fried plantain, roasted peanuts, akara, and suya. With the only exception being… smiles!

Reflecting on the day, Onyebueke, grinning widely and at a loss for words, simply added, “It went well”.
Also, Eke, was pleased with the outcome and expounded, “We had very many visitors at our stand and got featured by WSPA 7News network, as it’s their first time seeing us at the event…Based on this outcome, I plan for NIDO to continue participating in this annual event. We hope to make next year’s event even better.”

In view of such teamwork, vibrant activity, and positive impressions left on the community, NIDO members left with a sense of accomplishment.
Coming together and working toward a common aim filled everyone with gladness through the opportunity to transform some organizational objectives into tangible experiences for the community to enjoy.

Furthermore, the positive reception by many guests during the international festival was reinforcing, and it means that people can be receptive to cultural diversity if exposed to it the right way. Knowing this should encourage NIDO Greenville to continue embracing opportunities to educate others about the Nigerian culture.

The enriching personal encounters that these programs afford, help to bridge gaps between cultures and connect different people. Through the ensuing warmth engendered by such exchanges, people then experience the often quoted but simple truth: there is more that unites than divides us.