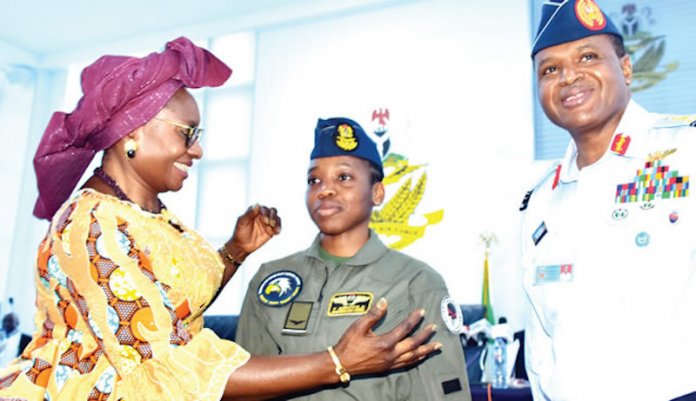 The Chief of Air Staff, Air Marshal Sadique Abubakar, said the duo would be deployed in the North-east in furtherance of the war against insurgency.

This was coming as the Air Force said 161 instructor and combat pilots were trained since 2015, while 22,841 personnel were trained in the last four years even as 111 pilots are undergoing specialised training.

He disclosed that two helicopter gunships would soon be added to NAF air fleet to boost its operations.

Speaking at the winging ceremony of the pilots, Abubakar said the female fighter pilot, Flying Officer Kafayat Omolara Sanni, and Combat Helicopter Pilot, Tolulope Arotile, would join the Air Task Force in the North-east to prosecute the war against insurgency.

He said the emergence of the female pilots was the first in the 55-year history of the Nigerian Air Force.

“These new pilots would no doubt boost the pilot manning needs of the service as their deployment to the various NAF platforms would enhance the fulfillment of the constitutional roles of the Nigerian Air Force especially in the ongoing operations in the North-east and North-west,” he said.

“Also, four student pilots are being processed for combat helicopter pilots training at the United States Army Aviation, Fort Rucker. Furthermore, 10 student pilots have been processed for Military-style Rotary Wing Pilot Training at Cobham Aviation Services in the United Kingdom,” he added, while noting that “most of the trainings are tailored towards ensuring that the pilots on graduation are mission ready.”

Abubakar stated that in a bid to consolidate on the gains on the fighter aircraft stream and force projection outlook, “all hands have been on deck to increase the number of serviceable L-39ZA aircraft for basic fighter training.”

“Also, increased serviceability of the A-Jets has inspired continuous advance fighter training locally. More so, with the NAF preparing to receive two additional helicopter gunships, our counter-insurgency efforts will soon be greatly enhanced.

“It is envisaged that with the induction of the Super Tucano A29 aircraft into the NAF inventory, our fighter training efforts will also be greatly enhanced,” he said.

In his remarks, the Special Guest and Minister of Women Affairs, Mrs. Pauline Tallen, said the winging of the new pilots demonstrated commitment of the NAF to meet national security requirements.

“It also portrays the Nigerian Air Force positively as it has shown that it is an equal opportunity establishment that encourages all its personnel to achieve excellence in their career,” she said.

She added that the development showed that the NAF leadership was providing the right leadership and guidance to ensure the realisation of the primary key driver of “his vision, which is hinged on human capacity development.”

“Furthermore, I want to assure Nigerians of the commitment and resolve of the federal government to spare no effort or resources towards safeguarding lives and properties of our fellow citizens across the length and breadth of the country,” she added.

Presidency Speaks on Magu, Says Probe of EFCC Boss Shows Nobody is Above Scrutiny