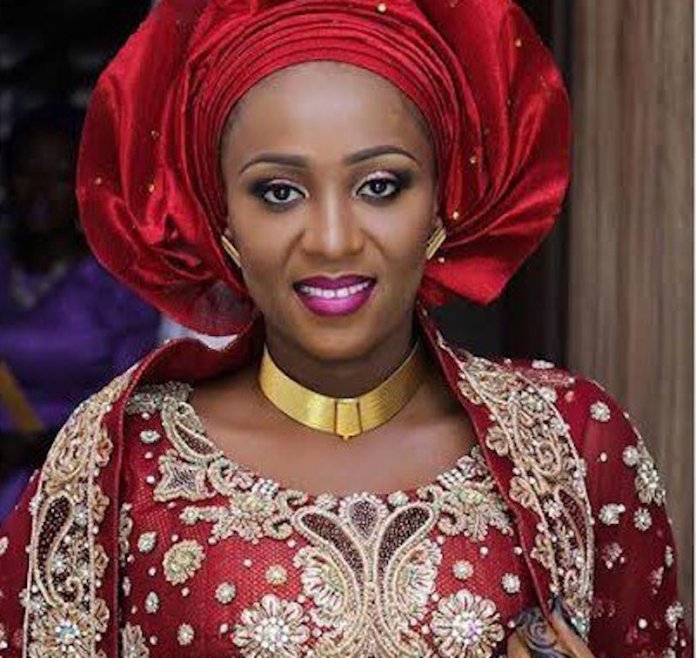 Maryam Sanda, wife to late Bilyaminu Bello, son of a former Chairman of the Peoples Democratic Party (PDP), Haliru Bello, on Wednesday insisted that she did not Kill her husband as alleged.

Maryam who made the denial while being led in evidence in her own trial, told Justice Yusuf Halilu of the Federal Capital Territory (FCT) High Court, that she could not have killed her husband owing to the strong love between the two of them.

The mother of two is being prosecuted by the federal government over her alleged complicity in the death of her husband, Bilyaminu Bello.

The Police had arraigned Maryam for allegedly killing the late Bilyaminu in their residence at Wuse II in Abuja on the night of November 18, 2017 by stabbing him with a knife and dangerous objects.

The defendant was charged with culpable homicide punishable with death in accordance with section 221 of the Penal Code.

She, however, pleaded not guilty to the charge preferred against her.

She was on April 4 ordered by the court to open her defence in a ruling on a no-case submission filed on her behalf by her counsel, Olusegun Jolaawo, SAN.

At the resumed hearing on Wednesday, Maryam in her evidence, amidst tears, stated that even though she and her late husband had their differences in the course of their two-year marriage, she would not have done such a thing.

“My Lord, I did not kill my husband. I would not have done such a thing. We loved each other despite our differences,” Sanda told the court while testifying as the second defence witness (DW2).

Giving a brief history of the unfortunate incident, Maryam said in the process of using her late husband’s phone to make a call on November 18, 2017, she had discovered a nude picture of a lady on the phone.

Maryam added that she then went to her husband to talk about the nude picture.

“He followed me and the issue became an argument and he was screaming.”

She stated that in the course of argument, she asked the deceased to divorce her adding that the late Bilyaminu held her neck, which got her choking.

The defendant told the court that later in the evening around 11pm, they had another argument when she went to take her charger in the living room.

“He pushed me and as I was falling down, I mistakenly broke his Shisha bottle and the water inside spilled on the floor.

“He pinned me to the ground as I heard our daughter crying, I told him to leave me so that I could attend to her and he loosen up a bit and I struggled to my feet.

She stated that while trying to hold her, the deceased fell down, she added that, “I thought he was pretending.”

The defendant further told the court that she saw her husband holding his chest and saw a broken bottle in his chest which she removed and covered the chest with her scarf.

According to her, she rushed out to call for help and met one Ayuba with whom she took her husband to Abuja Clinic, where the late Bilyaminu was confirmed dead, adding that he was later taken to the Maitama General Hospital, where he was also confirmed dead.

The defendant further said that when both her mother and cousin, Abubakar Sadiq, came to the hospital, they pleaded with her to stop crying.

The deceased mother and brother, according to her, also asked her to stop crying when they also came to the hospital.

From the hospital, she said that she was taken to the Maitama police station where she wrote her statement.

She refuted the evidence of two of the prosecution witnesses that she and her husband started quarrelling on the fateful day since morning and that she threatened to kill him.

“I did not try to kill my husband. We had an argument; that was all. I never wished my husband to die,” Maryam told the court.

While being cross examined by the prosecution counsel, Mr Adama Musa, the defendant told the court that she did not break the shisha bottle in anger.

She stated that as of the time she drove her husband to the hospital, the broken bottle she removed from his chest and the spilled water from the shisha bottle were on the floor of their living room.

According to her, “in the course of our marriage before the unfortunate incident, I did not ask for divorce severally. I asked him for divorce on this issue (the argument over nude picture sent to him by another lady).

Earlier, Maryam’s cousin, Usman, while being led in evidence by Sanda’s counsel, Rita Okotie-Eboh, told the court that she called him at about 1am on November 19, 2017 and informed him that she had lost her husband and asked him to call her mother and come to the hospital.

He stated that on getting to the hospital, he saw the remains of the late Bilyaminu on a stretcher, adding that he saw a cut in his chest, bite mark on the stomach and plaster on his finger.

He, however, told the court that he could not ascertain the cause of the injuries.

Under cross examination, Usman, who testified as the first defence witness (DW1), told the court that he liked Sanda so much, adding that he was not happy that she was facing trial for the death of her husband.

Okotie Eboh, informed the court that they were closing their case, after Sanda’ s testimony.

The judge, Justice Yusuf Halilu then adjourned the case until Nov. 25 for adoption of final written addresses.