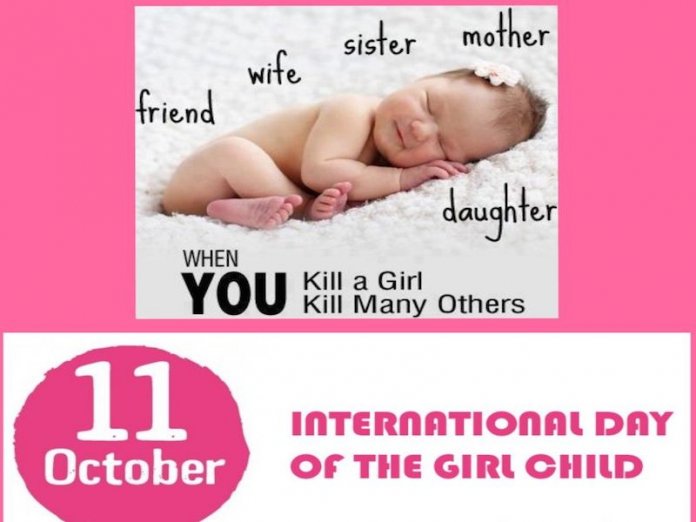 As Nigeria joined the rest of the world to commemorate the International Day of the Girl on October 11 with the theme ‘GirlForce: Unscripted and Unstoppable’, to celebrate achievements by, with and for girls since the adoption of the Beijing Declaration and Platform for Action 25 years ago, some stakeholders have called for peace in all parts of the country, among other prerequisites for the continuous development of the girl-child. Uchechukwu Nnaike, Funmi Ogundare and Segun Awofadeji report

The International Day of the Girl Child was declared by the United Nations and was celebrated for the first time on October 11, 2012. The celebration supports more opportunities for girls and increases awareness of the inequality faced by girls worldwide owing to their gender.

Since its adoption 25 years ago, more girls have been empowered to move from dreaming to achieving. More girls today are attending and completing school, fewer are getting married or becoming mothers while still children, and more are gaining the skills they need to excel in the future world of work.

Aside breaking boundaries and barriers posed by stereotypes and exclusion, including those directed at children with disabilities and those living in marginalised communities, the girls are becoming entrepreneurs, innovators and initiators of global movements, as well as creating a world that is relevant for them and future generations.

The Nigerian first lady, Aisha Buhari, in a tweet to commemorate the Girl Child Day, said parents need to protect their children from all forms of violence and abuse, while expressing satisfaction with the progress made on the advocacy by women groups on the need to protect their folk against any form of gender-based violence.

“Today, I join millions of girls around the world to celebrate this year’s International Day of the Girl-child, the theme for this year’s celebration is ‘GirlForce: Unscripted and Unstoppable.”

The first lady expressed excitement about the progress that has been made in the area of activism by girls to protect their gender, saying, “I want to state that more needs to be done especially to address gender-based violence which seems to be more pronounced recently and all hands must be on deck to achieve this.”

A former Minister of Education, Prof. Chinwe Obaji noted that the country has come a long way in the area of girl-child education because a lot of women have now ventured into those profesions that were exclusive right for men like the sciences, engineering, medicine, law, among others.

“We may even have more female lawyers in the country today than the male lawyers. This was a profession that was exclusively meant for men.

However, she said the country was supposed to have attained Education for All (EFA) in 2015 “and one of the goals of EFA was to attain parity between the male and the female. Unfortunately Nigeria like most other countries in Africa could not attain it. But then the government did make a lot of efforts to achieve that parity.

“As far back as 2005 we had what we call the girl education project and we went physically especially to the north where they had some cultural hinderances, to talk to them on the need for the girls to be educated and they bought into it and we were moving towards it until the unfortunate disturbances in the north-east. The Chibok girls were kidnapped from their school, the Dapchi were also girls. So the situation in the north-east today does not favour girls going to school because you find many of them in the IDPs camps and when people are not settled, they cannot go to school.”

To address the situation and have more girls in schools, she called for absolute peace in the country. “The events of 1967-1970 saw a lot of people both boys and girls out of school. So unless there is absolute peace in every part of the country people cannot go to school. What we should be talking about is how to restore absolute peace especially in the north-east area. So in the absence of peace in a place, education cannot thrive.”

To commemorate the day, members of the Queens College Old Girls Association (QCOGA), in conjuction with partners across other unity colleges alumni and various organisations with similar objectives, inaugurated the ‘Girl Force Movement’ themed ‘Free the Mind of the Girl-child- Let Her be!’
The initiative is a movement that respects, validates, encourages and enables girls to be who they want to be without constraint, scripting or hindrance.

The President of QCOGA, Mrs. Ifueko Omoigui Okauru, who briefed journalists in Lagos, said its goals is to use the movement to build a pipeline of women leaders that will drive the political, economic and social landscape in the communities of their choice with self-confidence and pride in whatever they chose to do.

“Women will be at the table equitably making decisions that drive improved quality of life for all,” she said, adding that the platform will be a catalyst for change and will provide annual feedback on progress made using data gathered as an instrument of advocacy.

“We will also share stories of persons working to uplift the girl-child in a variety of areas, including but not limited to leadership development, self-defense, improvements in quality and robustness of education, timely speak up ability, hotline access and mentoring.

“With the Girl Force Movement, we have a voice. We are setting out to instill confidence in the minds of the girls and women in our society from an early age,” the president stressed.

She told THISDAY that some girls have not been encouraged to speak, but through a gradual process, they should be encouraged, adding that they don’t have equal opportunity in education like their male counterparts.

Okauru expressed concern about the increased cases of rape, sexual harassment, defilement, molestation; and the recently uncovered sex for grades issue by university lecturers, saying that the way women are being treated in the society is a far cry from where they should be.

According to her, “this is not a call for women, but also a call for a better society that recognises the contribution and diversity of every part of its population to take decisions that impact millions of people. It gets worse when victims are hardly given the benefit of doubt.”

She regretted that the society discourages women from standing up to their right and voicing out issues affecting them, saying when issues of rape are mentioned, most people are quick to put the blame on the girl or woman accusing her of indecent dressing or being seductive.

This she said prevents victims of abuse from speaking out as the chances of being believed or any action taken to redress are slim.

“The seeming helplessness, feeling of inadequacy and reduced self-worth that women portray when accosted by persons of influence or those who they perceive have some hold over them such as their fathers, benefactors, spiritual heads and supervisors in the workplace make these women feel inferior to their male counterparts,” she stressed.

The president opined that the girl-child should not be made to stay at home while her brothers go to school and should learn to speak up and voice out right from an early age.

“The girl-child should have it in mind from an early age that she can grow to become a respected person occupying a high position in the society. With this movement, we would ultimately be creating a robust pipeline of women leaders who speak up and can occupy any position of their choice without fear or doubt; the need for women to hold key roles in the government and workforce cannot be undermined.

“Research has shown that arguably, this is recipe for significant success. We have roles to play in placing the growth and development of the girl- child as priority for national development with a focus on primary and secondary school students who are in their formative years where significant impact can be made.”

The Executive Director, CEADER, Mrs. Joy Ngwakwe, who emphasised on the issue of sexual harrasment on campuses, said people are beginning to speak up because social media are having their voices amplified, adding that the law should begin to take its course on offenders.

She said with the partnership, more girls will be impacted at the secondary school level through a mentorship programme.
Meanwhile, the Bauchi State Governor, Bala Mohammed has called for increased investment in girl-child education for the sustainable, socio-economic development of the country.

The governor, who stated this when he received 2,000 school girls at the Government House, Bauchi, shortly after an advocacy march organised by UNICEF and Universal Basic Education Commission (UBEC) as part of activities to commemorate the 2019 Day of the Girl-child, lamented that denying girls education retards their future progress and that of the society and urged parents and stakeholders in the sector to give priority to girl-child education.

Mohammed, who was represented by the Chief of Staff, Abubakar Tari, stressed the need to invest massively in the education of female teenagers who are living in the transition from childhood to early adulthood, rather than parents sending them into hawking or early marriage, adding that the education of the girl child is a priority of his administration as efforts are on to provide adequate finances and other logistic support for the promotion of girl child education.

He said his administration met a backward system of education in the state that was begging for attention, adding that the sector has received a lot of intervention that has reflected positively in the lives of children of school age.

On her part, the UNICEF Education Specialist, Miriam Dikwa stressed the need for parents to invest massively in girl-child education, saying that it would help to shape their future positively.
She said in order to have more enrollment of girls in school, UNICEF has trained 144 girls in various skills and carried out many interventions to encourage girls to complete their education.