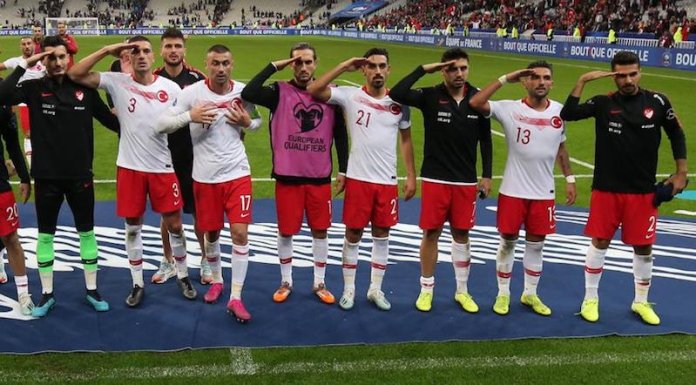 UEFA announced yesterday that it is opening disciplinary proceedings against Turkey into “potential provocative political behaviour” by their players after making military salutes in their last two matches.

In both their Euro 2020 qualifiers against Albania on Friday and France on Tuesday, Turkish players made the salutes – seen as supporting Turkey’s current military operation in Syria – as they celebrated late goals.

UEFA said in a statement that it has appointed an ‘Ethics and Disciplinary Inspector’ to investigate.

Similarly, UEFA has launched disciplinary proceedings against Bulgaria after racist chanting from their fans during their Euro 2020 qualifier defeat by England, the governing body announced on Tuesday.

In a statement, UEFA said that it was investigating racist behaviour, the throwing of objects and the disruption of the national anthem after the match in Sofia had to be halted twice after monkey noises and Nazi salutes from a section of the home support.

Later in the evening, more than 20 police officers swept into the Bulgarian Football Union’s (BFU) headquarters in Sofia less than a hour after its President Borislav Mihaylov resigned following racist incidents during Bulgaria’s Euro 2020 qualifier against England on Monday.

Bulgarian chief prosecutor’s spokeswoman said that the operation was part of an investigation, conducted by Specialized Prosecutor’s Office.

“It’s about crimes against sport,” Rumyana Arnaudova told Reuters. “We’re talking about corruption offences, connected to the work of the BFU’s referee commission and the appointment of referees on football matches.

“The investigation is still under way and it’s too early to say if there’ll be some arrests.”

A BFU spokeswoman also confirmed the presence of police officers at the headquarters in the Sofia district of Boyana.

The 56-year-old Mihaylov, part of Bulgarian team that reached the semifinals at the 1994 World Cup in the United States, had been BFU president since 2005 when he replaced long-serving Ivan Slavkov, who was expelled from the International Olympic Committee (IOC) following allegations of corruption.