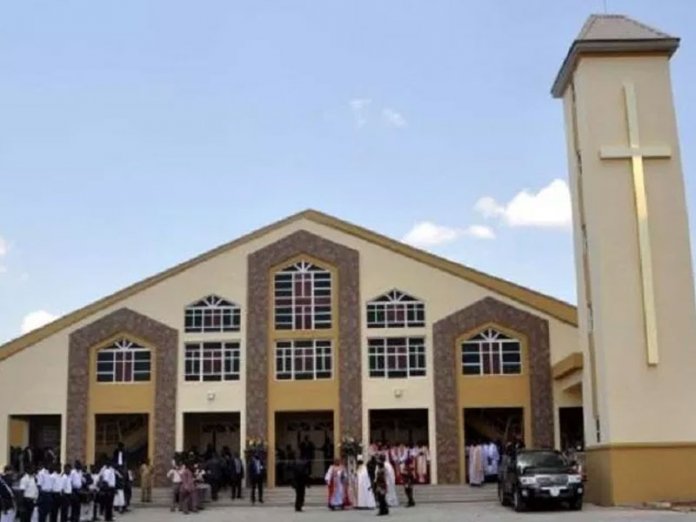 In the business of searching for God, nobody is wrong, writes Kevin Ebele Adinnu

I now know the right religion ordained by God. Growing up in Onitsha in the 70’s and 80’s, we used to take sides with our parents when they debated the authenticity of their faiths. As Catholics, we were warned to be wary of people that worshipped in the Anglican Church whom we christened Ndi CMS (CMS people). CMS stands for the Church Missionary Society. Parents who professed Catholicism did all to ensure their children were not tainted by Anglicanism and vice versa.

Their grudges against the Anglican religion were as mundane as they were legion: their translation of the Lord’s Prayer in Igbo is not “correct”; they do not go for morning masses; they do not start and end prayers with the sign of the cross; they do not confess their sins to their priests for the sacrament of penance. The Catholics believed that it would be easier for the camel to pass through the eye of a needle than for an Anglican to go to heaven. The children of Catholics believed their parents.

The Anglicans never failed to recount the sins of Ndi uka fada as they described the Catholic Church after their priests who are called Reverend Fathers. To this day, they see Catholics as idol worshippers for adorning their churches with “idols”: the sculpted images of Christ on the cross, that of the Virgin Mary and those of the array of Saints that bedeck strategic corners of the church. In addition, Catholics offer prayers to these “idols” daily when they recite “hail Mary” and call on saints in their prayers. For Anglican parents, the Catholics were already in hell fire. And their children believed them too.

I knew a strong member of the Catholic Church ordained Knight of St. John (KSJ) who never consented to his daughters’ marriages because many of the suitors were of the Anglican faith. Some of his daughters ended up without husbands.
In those days, the Pentecostal churches were still germinating in Onitsha. Both Catholics and Anglicans never took them seriously and barely tolerated the adherents. Islam as a religion never came up for discussion as we did not see it as a religion. We never knew that Allah means God. In any case, the few Muslims we interacted with in Onitsha then were very few and far between and we never took the religion seriously even though we used to go to the then Government Field in Fegge to watch their Durbar when they celebrated Eid-el-Kabir. That was all that attracted our attention.

Christians, despite their unending rivalry among themselves, were almost unanimous in concluding that all Muslims were headed for hell as “there is no other name (apart from Jesus Christ) given among men, whereby we must be saved”. Most of us never knew that Jesus Christ and most of the names in the Bible also feature in the Qur’an. In any case, we never saw a copy.

On the other hand, despite the Qur’an’s injunction to Muslims that “there is no compulsion in religion” and the exceptional tolerance shown to adherents of other religions by Prophet Muhammad (SAW) in the Sunnah, there are Muslim believers who still see Christians as infidels even though they do not voice this as the Christians are wont to do.
I was cloned to harbour these “truths” until like Apostle Paul on the road to Damascus, I was “converted” sometime in 1993 in University of Abuja, a melting pot of all these religions.

It was in a class on Sociology of Religion that we were provided with statistics of the adherents of the five religions regarded as the world religions: Buddhism, Christianity, Hinduism, Islam and Judaism. Of the five, Christianity, Hinduism and Islam, each has over 1 billion adherents as at 1993. Our teacher now asked us the question: Which of these religions is the right one to God? Our teacher did not give us an answer. She challenged us to draw our conclusions after the course.

All religions originated from the fear of the unknown and the search for the Supreme Being who created the Heavens and the Earth. This search led to the different conceptualisations of “the sacred” and “the profane”. In my village, we see the python as a sacred totem of the deity Idemmili, the pillar of water which links the earth with heaven. To this day, my people do not kill pythons and pythons do not harm people in my village. Is it not ironical that this sacred snake in my village is vilified in Christianity as having led man to sin in the Garden of Eden?

While adherents of some religions relish pork as a delicacy, it is a dirty creature that should not be eaten in Islam. There are some Buddhists that eat pork but do not eat Beef which some Buddhist sects rever.
Different religions also differ in their conceptions of Heaven and Hell. My ancestors believed that God lives beyond the clouds which is not far from the faith of some monotheist religions like Christianity and Islam. But unlike Christianity and Islam, my ancestors never saw the abode of God as where humans go to when they die. They remain in a sub-world from where they intervene in the affairs of the living when called upon during libations and often appeared physically as masquerades during festivals.
There are some variants of Christianity where adherents believe that the earth would turn to paradise which they would inherit after the so-called rapture.

Ancient Egyptians believed that God lived in the Sun as sun was still a mystery to them, and I dare say that it is still a mystery to us today. They nevertheless believed in eternity which explains the gold and rich ornaments with which Egyptian mummies were buried and tombs decorated.
To some religions, the abode of God is not physical but a spiritual state that one attains through purity which they call Nirvana. In this sense, some attain Heaven even before they die. This explains the Mahatma prefixed to Mohandas Ghandi’s name. Hindus believe he attained Nirvana on earth.

Still other religions which call themselves mystical schools like the Rosicrucian Order (AMORC) and Eckanker see life as a continuous cycle of living, dying and reincarnating until one discharges his Karmic load and attains oneness with the Supreme Being, the Cosmic Consciousness.
Religions also differ in their objects of worship. Some choose physical objects as representative of the sacred which they use as objects of concentration. Igbo ancestors carved objects which they placed in their household shrines to which they poured libation while calling on Chineke, God the creator. Chineke, Chukwu, Olisa, Oseburuwa, etc., are Igbo names for God invented by our ancestors which have found their way into the Igbo translations of the Bible as bona fide names of God.

The Catholics hoist the statue of Jesus Christ on the cross at the centre of their alters to which all worshippers look up, as a representative of God. While Muslims abhor images, even that of the prophets, they have their rosary which they employ in their prayers.
Even in the way they pray to God, religions differ. Our ancestors poured libations. The act of breaking kolanut in Igboland, which we have Christianised, is a form of praying. Muslims pray five times a day while facing the Ka’aba in Mecca. They also count their rosary just like the Catholics do when reciting “Hail Mary”. The Rosicrucians congregate in their temples, lodges or pronoas to chant vowel sounds while facing the East, from which the Sun rises in the tradition of ancient Egyptians. The Pentecostals dispatch their prayers by speaking in tongues which, to them, is an open sesame to God.

All these differences notwithstanding, all these religions are unanimous in upholding good deeds, promoting good behaviour and avoiding evil acts as prerequisite for good life in the hereafter, be it in paradise, heaven, attainment of Nirvana, union with Cosmic Consciousness or good repose in the spirit world of our ancestors.

I have tasted different religions. I was brought up as an alter boy in the Catholic Church, in the “Hail Mary” tradition. I wedded in the Anglican Church where I worship to date, but I still resort to my rosary to recite my Hail Marys when I want. I have had cause to chant vowel sounds in Rosicrucian temples in my teenage years. And I still chant them when I want. I still meditate in the Rosicrucian fashion when I feel like even though I abandoned Rosicrucianism at the age of 19. Three of my best friends are Muslims who respect my faith as I do theirs. In all these, I see no contradiction because the motivation is the same: the endless search for God as result of the unknown.
In this business of searching for God, nobody is wrong, not even our ancestors whom we have been compelled to dismiss as idol worshippers. Everybody is right, including our ancestors who, while pouring drinks on carved objects called on Chineke (God the creator) to answer their prayers.
––Adinnu, a Chartered Accountant, writes from Ezewelike, Eziora, Ozubulu, Anambra State (ababio38@gmail.com).