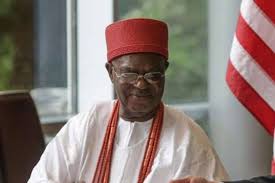 The monarch made the remarks at the grand celebration of culture and tradition at his palace on Friday attended by palace functionaries, dignitaries, indigenes of Onitsha Kingdom and other tourists.

Welcoming his subjects and guests to the festival, Achebe paid tribute to Globacom for supporting the Ofala festival as the official corporate sponsors since 2011.

He observed that the company had over the years introduced several innovations to the historic festival, thus making Ofala a huge tourism spectacle.

Attesting to Globacom’s contributions to the advancement of the Ofala festival, especially, the company’s sole sponsorship of the Oreze International Arts Exhibition, the monarch said the company’s partnership had been very beneficial to the festival.

The Oreze International Arts Exhibition was introduced to the celebrations seven years ago and over 4,000 artists have so far exhibited their works at the forum.

“Our appreciation goes to our main sponsor, Globacom. The partnership with this company has contributed significantly to the growth of Ofala”, Achebe said.

He expressed delight that the Nigerian Tourism Development Corporation had endorsed Ofala as a major festival in Nigeria, adding that the National Gallery of Arts had also provided support for the Oreze Arts Exhibition.

“To us, ndi Onicha, we are encouraged and energised by the knowledge that our kingdom is moving forward through our collective efforts”, he enthused.

Speaking with journalists at the Ime Obi, Globacom’s Regional Activation Manager, South East 2, Mr. Noel Udeme, said, “Globacom’s consistent sponsorship of the festival for the past nine years is an indication that we do not only love the Onitsha people, but that we are interested in the preservation of their cultural values”.

“Being a wholly Nigerian company, Globacom has contributed more to the promotion of the culture and values of the people of Nigeria, more than any other corporate organisation.

“We are not relenting in our efforts at promoting what makes us who we are as a people. Our culture is our life and that is the driving force behind the Glo Heritage Series, the platform we are using to support Ofala festival and other major festivals across the country”, he added.

The Ofala festival continues on Saturday with the Azu Ofala and will be rounded off on Monday with a Royal Banquet organised by Globacom in honour of Igwe Achebe at the Dolly Hills Hotels, Onitsha.

THE EXIT OF DONALD TRUMP