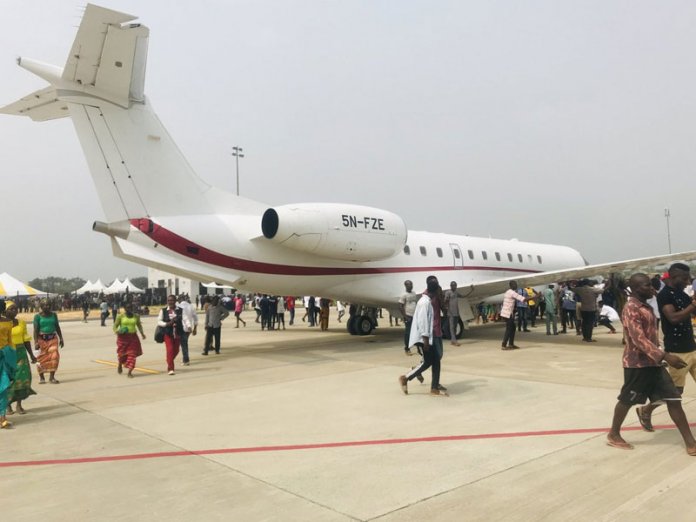 Cabo Verde Airlines, the national carrier of the Cape Verde Islands has competed plans to start direct flight service to Lagos from Cape Verde on December 9, 2019.

This was made known at a media briefing in Lagos, to mark the official launch of the airline into Nigeria.
The airline, which would operate Boeing 757-200, would fly five times a week, from the Murtala Muhammed International Airport (MMIA), Lagos, to its operational hub in Sal, Cape Verde.

The CEO and President, Cabo Airlines Jens Bjarnason, said the national airline of the island nation, known for its tourism destinations would make history by becoming the carrier of choice in Nigeria because of its exceptional service.

Ensconced at the edge of the Atlantic Ocean, near Senegal, Cape Verde Island services as flight route to three continents from Africa and this well positions it to serve as a hub from Africa to the North America, South America and Europe.

“We are excited to add the most populous country in Africa as one of our destinations. Nigeria has a vibrant travel sector and we look forward to servicing our customers and connecting them to Cape Verde and beyond, seamlessly.

“Our focus is to be an international airline connecting people between four continents; North, South America, Europe and Africa. The location of Cape Verde is very strategic in connecting the different continents and people in Nigeria will have a broader offering
“We will commence operations on the Lagos – Sal, Cape Verde route from December 9, 2019 with flights on Mondays, Tuesdays, Thursdays, Saturdays and Sundays.

“Passengers can look forward to comfort, quality and a memorable travel experience on our aircraft, which have 161 economy class seats and 22 executive morabeza premium class seats.

“Our unique selling point is that where for instance, others spend one hour to get to, we spend a shorter time because of our strategic position.
“The airline was privatised in 2019. Loftleidir Cabo Verde owns 51 percent while the state of Cape Verde owns 49 percent. Since we took ownership of the airline, we have tried to rebrand it,” Bjarnason said.

The airline boast of global recognition and certification. Since November 2009, it has been an active member of the International Air Transport Association (IATA). It also has IATA Operational Safety Audit (IOSA) certification which it successfully renews every year in addition to being certified by the US Federal Aviation Administration (FAA).
Tracing the history of the airline, Bjarnason explained, “It was established in 1958, as a public enterprise when it absorbed the then called Aero Club of Cabo Verde. Up to 1984, the company operations were restricted to the domestic market for eight of the nine inhabited islands of the archipelago.

“As an international operator, Cabo Verde Airlines has been implementing regularly the ever more demanding requirements in the area of aeronautical security, imposed not only by the European Union but also by the United States of America.

“In February of 2009, the company acquired its registry in the IOSA program of IATA. In May 2018, TACV changed its name to Cabo Verde Airlines. It is certified as IOSA Operator, the IATA Operational Safety Audit Program.”

The airline’s Nigeria Country Manager, Tariye Orianzi, said, “We are targeting African entrepreneurs, leisure and business travellers as well as world travellers with our competitive pricing and offers, including a Cape Verde stopover program at no additional ticket costs. Interestingly, Cape Verde is a member of ECOWAS, making it visa free for Nigerians.

“Cape Verde has some of the most beautiful untouched natural Islands in the world. We hope to bring the Cape Verdean culture and colours to all corners of the world, as our mission suggests – connecting four continents while also serving as the gateway for fast travel. We also believe the addition of this route will improve tourism in Africa.”