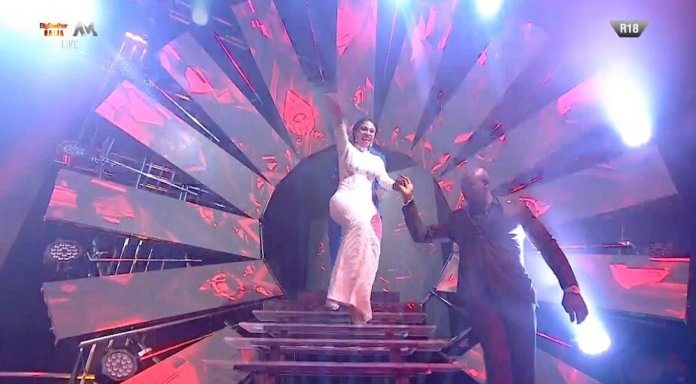 History was made Sunday night as Mercy Eke, a video vixen, emerged winner of the Big Brother Naija season 4 after a very emotional and enduring 99 days in the Big Brother Naija House. Amidst screams and shouts,  Mercy was unveiled the winner at a fevered pitch grand finale show that had five contestants vying for the ultimate prize worth N60 million.

Mike, Mercy, Frodd, Omashola and Seyi were the only housemates left in the game that premiered on June 30 with 21 housemates. Five other housemates were later added to the game, intensifying the drama in the ‘Pepper Dem’ season.

While the last housemates awaited their fate in the house, the live eviction show kicked off with dance shows from Dance Machine and Zinny X. It was quickly followed with a groovy performance by Patoranking.

Seyi was the first to be evicted, leaving behind Mercy, Omashola, Frodd and Mike. Omashola followed next. Frodd seemed not to believe his ears. It was as if he expected to be the next to take his leave after Seyi’s exit. He however was the third housemate to leave the house.

With the three housemates out of the race, the game was left to Mercy and Mike who were respectively known as Queen of Highlights and King of Cruise in the show.

After another performance by Patoranking and Tiwa Savage and the revelation of Seyi as the winner of One.org Campaign task, Mercy was finally crowned the winner of the show. She was joined on stage by her beau, Ike, and friend Diane.

Though he missed the coveted crown, Mike won two million Naira for emerging the  best overall timer of the Friday night arena games.

The fourth season of the reality TV show marked the first time the show was held in Nigeria after it returned in 2017. Previous editions were held in South Africa.

The house was speculated to have gulped billions of Naira and will be utilised for other Big Brother Naija shows.

With its spicy theme, the show was not void of dramas. There were the love triangles between Khafi, Gedoni and Venita; the lovebirds Ike and Mercy; the almost lovers Frodd and Esther, Elozonam and Diane. There were also the spicy housemates like Tacha who unfortunately was disqualified a week before the finale. Mercy brought her sexiness with her dance moves on the dance floor, she however got a competition in Venita, a former video vixen and was once a love interest of Omashola. The latter was known for his unique Warri lingo and his bluntness. Frodd was the fresh and odd guy, the slow tiger with big paws. Of all the finalists, he was among the least expected housemate to stay in the finale.

Who could forget the naughty Joe who provoked Tacha, or Esther and her sassiness.  Despite their short stay in the house, Ella and Thelma added some spice to the show with their banters.

Sponsored by Bet9ja, the winner goes home with N30 million cash prize, an SUV from Innoson Motors, two VIP tickets to an European Cup final courtesy of Bet9ja, a trip to Dubai, an electronic home upgrade from Scanfrost, an Oppo mobile phone, a one-year supply of Pepsi drink, Indomie noodles and Munch It snack.