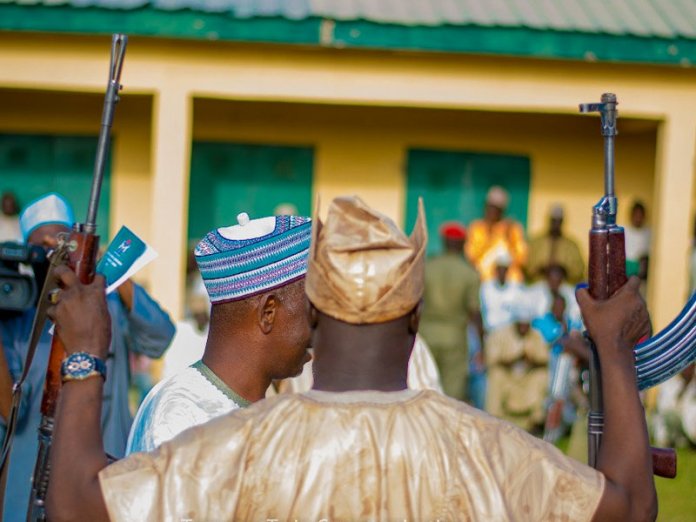 Laleye Dipo in Minna
Following a peace deal between the Niger State government and some bandits, no fewer than 35 bandits are said to have laid down their arms in three local governments of the state.
The local governments are Shiroro, Rafi Mariga and Munya.
As part of the deal, the government on its part has released 13 bandits earlier arrested and detained by security operatives in the state.
The government had to resort to negotiation with the bandits following the escalation in the level of insecurity across the state leading to the loss of lives and property in addition to dislocation of the people from their means of livelihood.
THISDAY gathered that the decision of the government to negotiate with the bandits was part of a resolution taken at a recent meeting of the Northern Governors Forum.
The Forum, it was gathered, had lamented the increasing bandits’ attacks in several states in the region which had had negative effect on the social and business lives of people in the area.
“The bandits are surrendering their arms in very quiet way. We don’t want the people to know so as not to create another social problem for them.
“This development has brought great relief to some of these communities as the people are now gradually returning to their homes after weeks at the IDP camps,” a government official privy to the deal told THISDAY.
One of the community leaders said the arrangement with the government has made it possible for “our people to go back and harvest their crops”.
Adamu Abdullahi from Kusherki community in the Rafi Local Government, when contacted, confirmed that they have returned to their ancestral homes but added that “all we want from the government is to ensure peace in our communities.”
The Chief Press Secretary to the Governor Mary Noel Berje confirmed the development saying: “Government is going about it quietly. We do not want to attract too much attention to the issue.
“With this development, we are optimistic that peace will return to the affected communities so that the people can again live their normal lives.”