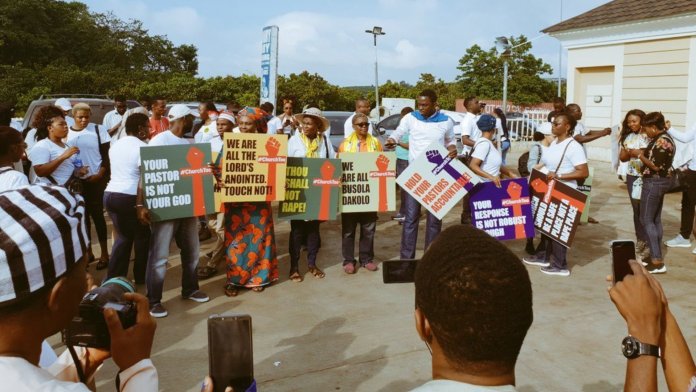 …Fatoyinbo throws cryptic words at ex-spiritual mentors
By Chiemelie Ezeobi
A fresh allegation of raping a pregnant woman is presently trailing the embattled Senior Pastor of Commonwealth of Zion Assembly (COZA), Biodun Fatoyinbo.
This is following the exclusive interview aired by Arise TV last Thursday where two of his former spiritual mentors admitted that they had treated several cases of rape allegations in the past when he was still running his ministry in Ilorin, Kwara State capital.
In the Arise special exclusive monitored by THISDAY last Thursday, the anchor, Adesuwa Onyenokwe of Today’s Woman, had interviewed Pastor Busola Olotu of Daughters of Deborah International Ministries (DODIM) and Pastor Emmanuel Oset of Canaan Ministries a.k.a Champion’s Church.
While Olotu was a mentor, Oset on the other hand was once Fatoyinbo’s spiritual father who officially ordained him into ministry back in Ilorin before the Abuja explosion and fame.
In the hour-long interview, the duo tacitly revealed that Fatoyinbo allegedly had a history of rape allegations when he was in Ilorin.
Meanwhile, Onyenokwe, in a fresh interview on the Arise Morning Show, weekend, also revealed that there were cases that they didn’t show because of its sensitive nature.
She said one of such was that of a married woman, who alleged that the said pastor raped her in her husband’s house in Ilorin while she was pregnant.
She said: “There are cases that we cannot include. Including one involving an alleged sexual assault of a pregnant woman.
“There is a lot of cases we could have brought put when we found out. There is a woman who was pregnant for her husband at the time that this said Pastor did rape her.

“That woman is still married to her husband. Can she ever publicly come out and say this is what this man did to me? She can’t because first of all, most of the young girls he has done this to are married. How many men in Nigeria are like Timi Dakolo?”

Dakolo’s wife, Busola had recently stirred the hornets nest when she accused Fatoyinbo of repeatedly raping her almost two decades ago and forcing Krest soft drink on her to prevent conception.
After the Arise TV expose, Fatoyinbo has been dropping cryptic messages on his Instagram page,
alluding that his accusers were targeting him in a calculated attempt to tarnish his image.
On Friday he wrote: “I think some of us were born to give more love than we will ever see in return. Do not be bothered if those who you have been a huge blessing to turn against you because of ingratitude, envy and Jealousy. Don’t even think about it for a second, don’t let who they are change who you are!”
On Saturday, quoting one Genereux Philip he wrote, “People only throw shade on what’s shinning.”
Adding his own thoughts to the quote he said: “But when you face light, you don’t see shadows. Focus on Jesus. #KeepShining #LovelyDay.”
In yet another post he wrote: “I keep my head held high and smile because there are some people that will kill to see me fail.
“And when it was day, some of the Jews banded together and bound themselves under an oath, saying that they would neither eat nor drink till they had killed Paul. Now there were more than forty who had formed this conspiracy.
“They came to the chief priests and elders, and said, “We have bound ourselves under a great oath that we will eat nothing until we have killed Paul. Acts 23 : 12-14. BE WISE! “Kole Werk”, (loosely translated to mean it won’t work).