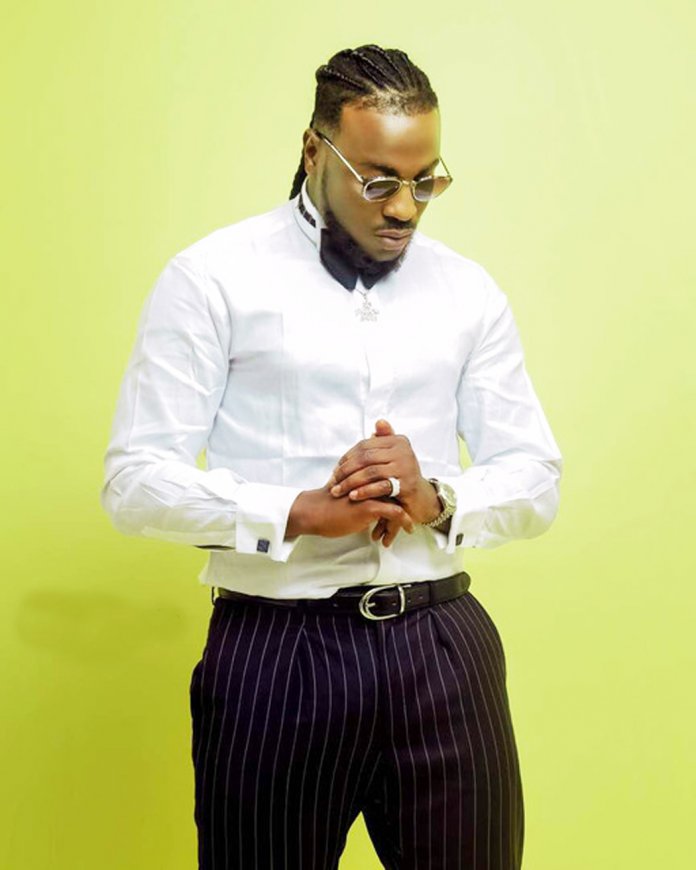 Davido Music Worldwide (DMW) artiste, Peruzzi, is exceptionally talented; let’s say unique in the sense of his strong vocals. You could easily single out his voice from his collaborative efforts. That’s if you’ve followed his career since his emergence in not really a short while ago. Like in the hit song Amaka by 2Baba featuring Larry Gaaga and Peruzzi, whose real name is Tobechukwu Victor Okoh. Or in the bubbly jam Azaman by Slimcase which also has the once intended medical doctor Peruzzi, and a couple of other stars, including 2Baba again. Peruzzi’s late 2018 single, Majesty, featuring no artiste has his voice etched.

Prior to the success of Majesty, the singer/songwriter had been maligned by many who claimed he only shines on featured songs. However that notion is fast changing with listeners now respecting the artiste for his lyrical prowess. Peruzzi’s vocal sound peculiarity is outstanding. “That’s the voice,” a colleague and friend, Rotimi Agbana noted as we sit for a chat with the Afro-pop musician who had just started talking. “My year has not really started right now considering the things I’ve been working on. But yeah it’s been good it’s been wholesome, thank God.”

He had just recently dropped the video for the song Majesty “…and so that one brought back the song I dropped last year to show that I’m ahead of the game,” Peruzzi boasts. “I mean like I dropped the song in December and its now people are just catching up, you understand. So, I’m still riding on the Majesty wave. But I’m recording my album already, my first album; it’s called Honcho Vibes. It’s a whole community of vibes, different genres and that’s basically where you would get to understand what I’m about.”

Peruzzi’s career has really taken a quantum leap since he teamed up with 2Baba in the song Amaka. He revealed that Amaka was another song that changed his life, money wise, because it brought him shows. Speaking on how the collaboration happened he said, “I was in Larry Gaaga’s (music businessman) place and then we were vibing. I wrote everything in the major part of the song and 2Baba came and added his legendary flavour to it.”

Peruzzi’s first introduction to the entertainment scene came with his single For Your Pocket. And ever since has kept not a few interested in him. He’s certainly having a good moment right now coasting high on the scene with multiple collaborative efforts to his credit, like he did with Mayorkun last year in the song Red Handed. Peruzzi is predicted as Afro-pop’s next big star, and he certainly deserves it, as he’s a good singer and an even better songwriter.

Right from time, Peruzzi has always been about music. “I was born into a family where everybody sings. I have two sisters. My dad bought me a piano when I was seven years old.  At that time, I had to learn how to play even though it was rubbish,” he said jokingly. “I remember the first song I ever learnt how to play was ‘this is the day that the Lord has made’. So every morning devotion they must sing ‘this is that day’. I mean like that’s the first song I sing like ten times before we end the praise session.”

So from there, Peruzzi got into the choir normally as a church boy born into a Christian family. His dad is a deacon, his mum was a deaconess. “She was and we were like as it was a major normal thing always in church on Sundays, choir practice on Saturdays, prayer meetings on Wednesdays, just like that (laughter across) so it was quite a normal family. My dad is an engineer, my mum was a doctor. I used to sing in high school normal group and all that stuff before I went to university.”

This was a new phase in his life entirely as he enrolled to study Medical Surgery at Odessa State Medical University in Ukraine. To him, he didn’t do anything music his first year because it was new to him and he needed to be serious.

However a chance to sing in his second year at a Valentine party exposed him and before he knew it they started paying him to come perform at shows then in school. But he hadn’t enough songs and was battling trying to shuffle his music and study at the same time. So whenever he got the time he would go to studio and write songs. “Once I’m in the studio I’m ready to sing we record that day because I may not have time again,” Peruzzi explains.

“So I go to studio and then I would record all the songs I have rehearsed and stuff. So I was doing it like that till my third to fourth year. After my fifth year, I had issues with my passport; somebody stole my passport. As at that time, I was already tired because I was seeing things happening in Nigeria music industry and I knew I could do better.”

Peruzzi had to find his way back to Nigeria, abandoning his medical study. But that was not without an excruciating experience in the hands  of  a Nigerian embassy official who would only issue him a travel certificate on condition that Peruzzi present his flight ticket first. “In my mind I’m like, ‘you devil you’ve really given me a certificate instead of a passport,’” Peruzzi recalled that challenge while narrating the moment.

Prior to his arrival in Nigeria, Peruzzi was made one or two record offers, especially one from X3M  Music, through a known agent but it didn’t actually work. “I did all and tried and tried in Lagos the music thing with X3M  Music didn’t work out. I didn’t even hear anything from them again. Then one guy from Malaysia somebody showed him my music, he now signed me and I was happy. He put me in a different house with some boys and was sending money through somebody to me and I was just there like that recording songs.”

That didn’t work out again as he had imagined. It was a moment of upheaval that he started debauching in alcohol and women. “I just got tired at a point and had to leave them. Because I kept trying to tell them like ‘guy, I’m a serious guy! Like I left something (medical study) for this shit you know what I’m saying, I’m not really down for all this I don’t really have time. I have people watching and waiting like they want to know what’s up you get but they didn’t understand.”

He didn’t listen to any Nigerian song for like three years. . .  “Then three years later, I met this guy so the first song we dropped was For Your Pocket. Then we now came back to Lagos. . . I just slept one evening like that; I was tired then I woke up, checked my phone I just saw messages from people hitting me up to go check Davido’s Instagram handle.

“I did; the first thing I saw was ‘Davido official liked your video’, that’s ‘For Your Pocket’ video on Instagram. I just checked the page again to be sure because I just woke up I now saw that verification badge. . . The next day, the same thing, I slept again, in the evening woke up ‘go and check Davido’s messages’ because I was following him then. I just checked he was playing the song he wrote my name there. ‘Eh that one like guy…I don’t blow that was it.’ But still after that I didn’t know what to do.” At that point even he claimed he wasn’t tempted to direct messaging Davido whom he met afterwards through Davido’s Chioma, who happens to be Peruzzi’s distant cousin.

“To cut the long story short, we did ‘For Your Pocket’ remix and dropped it. So one time like that I went to Ekiti and I was coming home; he (Davido) just called me. Then he was like ‘omo come house o!’ I said ‘ah where I’m staying is very far o!’ And I was really tired. He now said ‘eh no wahala you can come tomorrow. But I have recorded ‘FIA’ (a song Peruzzi wrote. That song would then turn out one of the best songs from Davido). ‘Omo I just told the Uber guy about turn lets go.’ And he played it. And it was too perfect like it was his story . . . so it really sounded perfect and that was what changed my life. Many people think it was For Your Pocket that actually changed my life, but no it’s that song, that particular song that changed my life.”