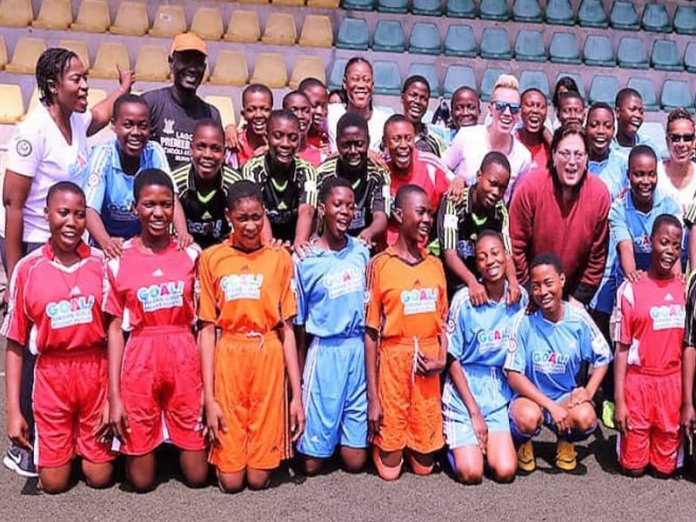 The United State of America Consulate in Nigeria recently partnered Fortem Aspire; a girl-child mentorship oriented non-governmental organisation, in a bid to educate vulnerable young girls across Nigeria of the dangers of sex trafficking and how to they can develop abilities to protect themselves against it through sports.

Addressing journalists, Pierangelo said, “I am really excited about this event today, as you can see, ‘Goal! Strong girls, Bright Future’. Working with our partners in Fortem, and the US Department of State, we are bringing US professional soccer players, Nigerian professional players, and various mentors all together.

“When you train a girl in how to play a sport and how sport can affect their future by building strong minds and bodies, but most importantly, it helps us pass a message of how to prevent trafficking in girls and women.

“This is really a critical issue, not only in Nigeria but around the world. And through these programs, we are helping to spread information and training which we hope would help to prevent future trafficking by teaching girls the skills they need to recognise and to avoid.

“I believe very strongly that when each of these girls goes out, they would become our ambassadors. The more they know, the more they talk to their friends, sisters, cousins, schoolmates etc.

“Hence, for every girl that we have enrolled in this programme, I fully expect that when they go out they are going to touch another 10 lives. Because, it has to be talked about, it has to be taught, and brought to the open.

“Girls have to be educated so they can go and educate other girls. And most importantly, they can also go and educate the adults who may not understand these things either.

“I would also be having a similar discussion with the local authorities, and other representatives in either state to talk about what we can do, working on official level with the state, to help them address this problem and hopefully, others unforeseen.”

Also speaking with journalists on behalf of Fortem Aspire, Chisom Ezeoke said, “We know that Nigeria, especially Edo state is recognised as the headquarters of trafficking and this is something that has bothered us over the years.

“Sports is such a powerful tool, and if you look at everyone here, sports has in one way or the other impacted their lives positively, including myself. We have done this for two years and the impact has been great. This is the third year, and for the US consulate to come on board for us, it is massive.

“From here, we would be moving to Benin. It is the main place where we see as the centre of trafficking here in Nigeria. And the consul general would likewise be accompanying us there to.

“For the girls, we plan for 50 in Lagos State and 120 from eight different schools in Benin. The ripple effect is massive already. Everybody is showing a lot of interest. The girls are so excited to meet all the female football icons we had brought.

“That alone has its own impact, as you know, we have limited female football role models for girls, and they seeing Dede, Stacy, and Lohman, is a strong message to them being able to aspire to become great and as successful as them.

“It would also help their self confidence and belief in their dreams for a better life and successful career. We know that they would speak about it, and also go further to share with other girls what they have learnt. And hopefully, we can change over a 120 lives that would have a massive ripple effect on other girls in the future.

“Another angle we taking this is the parental side of sex trafficking. We found out that most children are pushed into it not just because they wanted to, but either they don’t know about how they want to be recruited and they get stuck, or their parents pushed them out.

“So we expect them to go back home and tell their parents what the negative effects are, and the ripple effect would be enormous.”

According to the group, Dede is a retired Nigerian female football goalkeeper, who formerly played for several clubs including Delta Queens FC, Ibom Queens and Arna-Bjørnar, as well as appearing 99 times for the Nigeria women’s national football team.

She had initially considered retiring from international football following the 2014 African Women’s Championship, but was convinced to continue playing through the 2015 World Cup. Following the tournament, she announced her retirement in March 2016, having played 99 games for the senior national team. At the time of her retirement, she had been the longest serving player the squad.

Wilson on the other hand is an American soccer player and Olympic champion. She is an alumna of Thomas Jefferson High School for Science and Technology and the University of North Carolina. She received a gold medal at the 1996 Summer Olympics in Atlanta. Wilson was an All-American soccer player during high school in Virginia.

She was a dominant defensive player as a member of the North Carolina Tar Heels women’s soccer team. There, among other honors, she was the 1994 National Freshman Player of the Year. In March 2001, the team retired Wilson’s jersey number 27. In March 2012 Wilson became an assistant coach for women’s soccer at Florida Atlantic University.