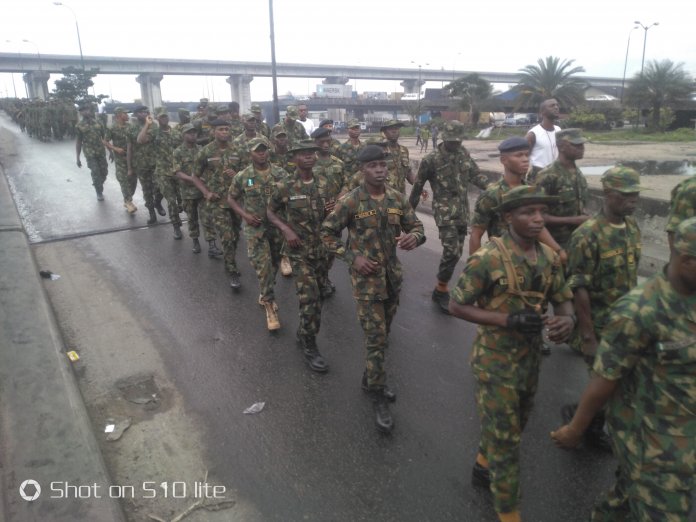 The Nigeria Navy (NN) authorities have charged its personnel to shun any act of violence, use of banned substances, even as they endeavour to go for periodic checkups and exercise regularly to keep fit.

This charge was given during the recent 10km fitness walk held in Lagos Naval Training Command (NAVTRAC) in Apapa.

The walk which began around 6am, kicked off from NAVTRAC down to Costain roundabout  and back to the command, had all members of the naval units under the command in attendance.

Addressing participants after the routine march, the Flag Officer Command (FOC), NAVTRAC, Rear Admiral Stanford Enoch, said the exercise was aimed at enhancing the mental and physical alertness of officers and men of the navy.

According to the FOC who was represented by the Chief Staff Officer (CSO), Rear Admiral Idowu Yusuf, “We have taken this directive from the headquarters, of the NN.

“As I speak to you, this exercise is being conducted simultaneously all over the commands in NN. And as a matter of fact, naval headquarters is also participating. Hence, it is a great privilege.

“And I hope that you are aware that the exercise is aimed at enhancing the mental and physical alertness of officers and men of the Nigerian Navy.

“For this morning exercise, I did not get any report of anybody falling down or not completing the race, this is a great achievement. I must say to you all, keep it up.

“The nation relies so much on us, and we cannot afford to disappoint the nation. The navy cannot do it alone; hence we need to work together with the sister services of the paramilitary.

“That brings to fore the importance of inter-agency collaboration and cooperation. We must work together. An adage says, when one hand washes the other, the two hands becomes cleaner.

“We must work together with other ministries, departments, and agencies. If we don’t work together, we would spread doom for the nation.

“We must eschew violence. Running away from violence doesn’t make you a coward. You are just showing maturity. Any day you see any naval personnel fighting outside, it is a disgrace to the naval profession.

“That is why we wear white. The naval force all over the world is a symbol of peace. It is a symbol of unity. And the Nigerian navy is not an exemption. So let us eschew violence.

“And of course as we often say, we must stay away from banned substances, it is not allowed. And if you are caught, there is a very serious repercussion for that. And check the armed forces act for such repercussion.

“And then, I am to encourage you that you must carry out some medical checkups periodically. Check your blood pressure and other vital signs. They are very important. And because of the nature of work that you do, you must keep on exercising, so that you can be fit.

“If you want to see the flag officer, naval training command, you are welcome. You cannot be in service, and be taking the service to court. It does not speak well of us as a family. If you have any issue, go to the proper channel.

“Having said this; I want to appreciate you for this feat. For this great assignment that you have achieved easily, I want to thank you.

“I want to of cause appreciate the Chief of Naval Staff, Vice Admiral Ibok-Ete Ibas, for this well thought process of quarterly exercising ourselves, to prove to the nation that we are able, and that we are there for them.”