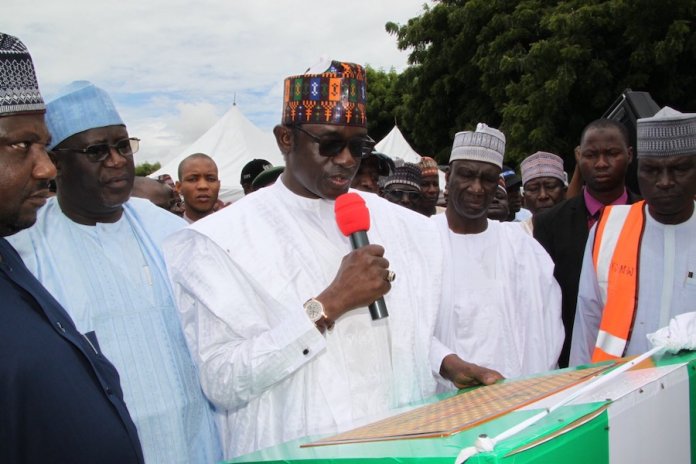 Though Yobe State is far from the centre of things, Muhammad Abdullahi who resides there writes that going by the accomplishments of Governor Mai Mala Buni in his first 100 days in office, there is plenty hope in the horizon

Governor Mai Mala Buni is one of the 29 governors that took the oath of office on May 29, 2019 and within the time under review, he has matched his campaign promises with actions, consolidating on the solid groundwork laid by his predecessor, Senator Ibrahim Gaidam.

Buni had at the onset of the new administration proved his mettle in advancing good governance occasioned by service delivery to the people, solid structures for human capital development and economic prosperity.

Although Yobe is not as well off as many other states, and the state and its people have had their fair share of security challenges, those did not in any way hamstrung the gradual but promising development strides being put in place by Buni. Keen watchers of events in the state say that the new has started on a sound footing devoid of controversies and unnecessary distractions.

Until he became the gubernatorial candidate of his party, the All Progressives Congress (APC), Buni was the national secretary of the party, a strategic position in the ruling party that prepared him for the tasks and challenges ahead. He had served a complete first term of four years as national scribe of the APC and had begun his second when he became the governorship candidate of his party in Yobe State.

Buni had built a formidable network of contacts and friends during his national assignment with the APC, network that would be very useful to him going forward. As candidate, he campaigned on the twin planks of “continuity and consolidation” and as he marks first 100 days in office, the governor left no one in doubt, within Yobe and beyond that he is well prepared for the job. He promised to continue with the successes recorded during the administration of his predecessor and mentor, and to consolidate on those achievements by opening more doors of socio-economic development in the state.

On inauguration on May 29, 2019, Buni identified healthcare, education, agriculture and youth empowerment as the major pillars on which to rest all other development efforts.

Therefore, he declared a state of emergency on education with particular attention on basic (primary) and secondary education. One month later (July 1, 2019), he convened an education summit, first of its kind in history of the state, and assembled experts, parents, traditional rulers, administrators, educators, etc to brainstorm on the state of education in Yobe and proffer workable, actionable steps for how to clean the rot in the system and provide for quality, functional education.

The committee, called Technical Committee to Revitalise Basic and Secondary Education, was led by former Vice Chancelllor of the University of Maiduguri, Professor Malah Daura.

During the summit in Damaturu, Buni complained over what he called “continuous dismal performance of students of the state in all the secondary school leaving examinations”.

Though recent statistics showed a flicker of hope owing to huge investments and policies that favoured the religious and cultural peculiarities of the state, Yobe had for so many years trailed behind other states in WAEC and NECO, a development that made this initiative timely.

Buni said the summit was aimed at reworking the existing policies that will engender a better learning environment in public schools.

According to him, “our education system is still not where it is supposed to be. We still have so much work to do. First, we all know that the performance of a majority of Yobe students in various national examinations, including SSCE and NECO, is not very impressive.

“Second, because of the often-dismal performance of students at the primary and secondary school levels, Yobe has remained unable to fill our quotas in various institutions of learning and in significant areas of specialisation, such as medicine, computer science, and engineering.

“Third, as a result of the above, we are still a long way from getting an adequate number of indigenous professionals that our state needs to provide much-needed social services.”

However, these problems were not surprising, considering that like its neighbour Borno, Yobe had in the last one decade suffered serious setbacks in education because of direct onslaught by Boko Haram insurgents.

After exhaustive deliberations during the summit, the Prof. Daura-led committee worked for several weeks, visited more than 1, 400 schools, talked with relevant stakeholders and reviewed data over several years. It submitted its report to the governor and the governor promised to study the report and begin implementation.

“I think this is probably the best thing that happened”, said Aliyu Mohammed, a primary school teacher and also a student of Atiku Abubakar College of Legal and Islamic Studies, Nguru.

“If we will get our education system right, every other thing will be right because literacy is key,” Mohammed said. “I salute the courage of the governor because no investment in education will be too much. Of course, it will take some time to see the results but the commitment the governor showed immediately after he assumed office is commendable”, he added.

THISDAY gathered that the governor has already given approval for the implementation of the report put together by the Prof. Daura committee and assured that all the necessary backing required will be provided. For example, based on the recommendations of the committee, he has approved for the establishment of three Science, Technology, Engineering and Mathematics (STEM) education schools to advance science education in Yobe State. He has also approved for the setting up of a Teacher Training Centre to re-train teachers in the state who are falling short or who need to be pushed to catch up with modern trends in teaching. Buni has also approved the recruitment of new qualified teachers across the state.

On agriculture, the governor plans to hold a ‘Yobe Agricultural Retreat’ from September 16 to 19 2019. The retreat, similar to the education summit, will assemble relevant stakeholders and tap from their views and experiences to re-position agriculture and move it away from a subsistence to a commercial enterprise in the state.

While the retreat details are being worked, the governor has ordered hundreds of truckloads of fertilisers for sale to farmers at very affordable rates. In conjunction with the 17 local government councils also, the state government has procured 103 tractors for use by young, female and elderly farmers across the state.

Yobe is an agricultural state, with other 70 per cent of its people engaging in mostly seasonal farming. It is to expand agriculture and food production that Buni is also working to resuscitate and reactivate dormant industries in the state, including the woven sacks factory, the Potiskum Flour and Feed Mills and the Potiskum Aluminium company. Already, the governor has approved funds for the retooling and re-equipping of the Flour Mills and the Aluminium company.

Buni has also began to use the extensive contacts he has built during his time as the APC national secretary to build partnerships and contacts that are working well for Yobe State.

He has struck a partnership with a housing finance firm, Family Homes Funds Ltd, to build 3600 low- and medium-income housing units across 17 local governments in the state at over N10 billion. The foundation laying ceremony for the construction of these houses was held on September 5, 2019 in Damaturu. It is estimated that this will create thousands of new construction jobs.

In conjunction with the Nigerian Shippers’ Council, Buni is also building a Modern Trailer Park in Potiskum, the town in Yobe which has the highest numbers of trailer trucks in the whole of the North. The trailer park will be built under the Private Public Partnership (PPP) arrangement. Yobe State Government has already provided 50 hectares of land in Potiskum. The park will also have a mechanic’s village, hotels, fuel stations, etc and is projected to create over 5,000 direct jobs. The foundation stone for the park has already been laid by the governor on November 4 in Potiskum.

The governor is also said to be working on partnering the Sukuk Fund to build the very first Modern Market in Damaturu, the state capital and other modern markets in Potiskum, Gashu’a, Nguru, Gaidam, Ngalda, and Buni-Yadi Towns. Surprisingly, until now, Damaturu as Yobe State capital for 28 years does not have a built marketplace.

The governor is also partnering the Kingdom of Morocco and entities in that country for youth empowerment. Morocco is famous for embroidery, including traditional wears that people use a lot in Northern Nigeria. So, Yobe youth will be trained in arts and crafts, etc to support them to become self-reliant. A delegation from Morocco is expected in Yobe in the middle of September 2019 to push the partnership forward.

The governor has also begun the construction of township roads in Buni-Yadi, headquarters of Yobe’s hardest hit local government by the Boko Haram insurgency – Gujba. More towns, including Damagum, Babban Gida and Jaji Maji are in line for more township roads in the coming months.

Buni has met with youth groups to indicate how important youths are to the development of the state. He has raised public confidence in governance and has kept hope alive that he is truly a worthy successor of Governor Gaidam, who was seen as having really done so much for the state despite obvious challenges.

He also continued with the remarkably popular worker-friendly disposition of the past administration of Governor Gaidam by ensuring regular and timely payment of salaries, pensions and gratuities of civil servants.

“History will judge the governor fairly if he implements all these programmes within the next few years,” said Mrs Halima Isiaku, a nurse in Potiskum. “I am not a politician, but our governor has proved that nothing is impossible. Leadership is about creative thinking and it seems he has taken the responsibilities vested in him very seriously; he needs our support”, she said.

Isiaku, however, advised the governor to assemble a formidable cabinet that will help him implement the projects he has planned in order to achieve the desired results.