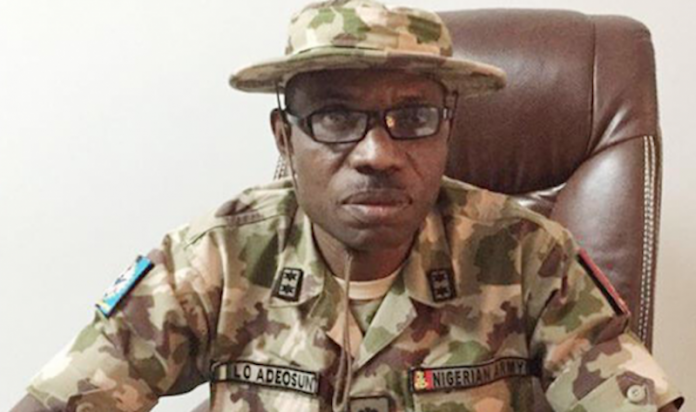 The General Court Marshal convened yesterday by the Nigerian Army to try the former General Officer Commanding 8 Division of the Nigerian Army in Sokoto, Major General Hakeem Otiki, started on a dramatic note following the request by General Otiki that the President of the Court Marshal, Lt. Gen. Lamidi Adeosun, who is also Army Chief of Policy and Plans, should step aside on the ground that he is an interested party and would not be fair in dispensing justice.

Otiki is standing trial following the abscondment of five soldiers attached to his office with the sum of N400 million. The five soldiers, who absconded with the money were allegedly instructed to deliver it to an important personality in Kaduna.

The fleeing soldiers, who have since been declared wanted are: Corporal Gabriel Oluwaniyi, Corporal Mohammed Aminu, Corporal Haruna, Oluji Joshua and Hayatudeen.

Otiki’s counsel, Major Femi Oyebanjo (rtd) in response to a question by General Adeosun whether the defence accepted his headship of the Court Marshal, had said that apart from a long history of grudge borne against Otiki by Adeosun, stemming from the fact that Adeosun was “established and trained in the army by General Otiki,” the accused would not be fair in the trial.

He argued that for the fact that the accused, who appeared before the court on a wheelchair, inherited the security personnel attached to him as GOC 8 Division from General Adeosun, who had just left the position of director of operations, Nigerian Army, he would not be fair in the trial. He generally implied that he may have been set up by General Adeosun

Oyebanjo further argued that a further proof of the Adeosun’s grudge against Otiki, was that the former refused to acknowledge a congratulatory text message sent by the latter on his promotion to the rank of a lieutenant general.

“We have it on good authority that you bear grudge against our client. We have this deep feeling that he may not get a fair trial under your leadership.

The defence counsel argued further: “We have this feeling that that grudge is still there. More so that General Otiki took over from you as the Corps Commander, Infantry.

“We still believe that because this grudge has been there since then and because of this grudge, when you were promoted Lt General, he sent you a text message to congratulate you but you did respond.

He said: “in addition to that sir, it is a fact that by the time we go into this trial proper, certain issues will certainly come up and these are issues that affect your office as Chief of Operations, Nigerian Army, which you left before you got to where you are presently.

“What am I staying, sir? it is a fact, sir, that General Otiki as the GOC Commanding 8 Division of the Nigerian Army conducted Operation Sharan Daji. He also conducted operation Harbin Kunama 111

The defence counsel noted that “these were offices directly under your command as Chief of Operation. And these are operations that are going to come up in the course of this trial. So, sir, you are actually an interested party.

“Finally sir, it is also a known fact, that as at the time General Otiki took over from you as the Corps Commander, Infantry Brigade, he inherited your security personnel; your soldiers that formed the inner security of General Otiki”.

According to him “these are the same personnel that formed the reasons why we are here. They are actually your soldiers – your personal aides.

“The soldiers he took over from you – these soldiers are the basis why we are here today.

“Sir, on that ground, for the sake of Justice, we are saying that you should excuse yourself from this trial,”, he said.

Earlier, General Adeosun had cited Section 213 of the Armed Forces Act that conferred the powers on the Chief of Army Staff, Lt. General Yusuf Buratai to convene the general court martial.

He listed the books of reference to include the 1999 Constitution, Armed Forces Act, Evidence Act 2011, Army Rules of Procedure 1973, the Holy Bible and the Koran.

The issue of the health condition of General Otiki, who appeared on wheelchair also came up as the defence counsel pleaded with the court to allow the accused sit on a wheelchair based on the doctor’s recommendation.

The prosecuting counsel, Major Obot also sought the medical opinion on the state of health of the accused based on the defence counsel’s earlier submission.

But his position was countered by the judge advocate, who insisted that the court had not been formally inaugurated.

General Otiki was held in a standing position by another soldier while responding to questions.

Journalists were asked to leave as soon as the defence counsel started reeling out reasons why Adeosun should excuse himself as the President of the Court Marshal.