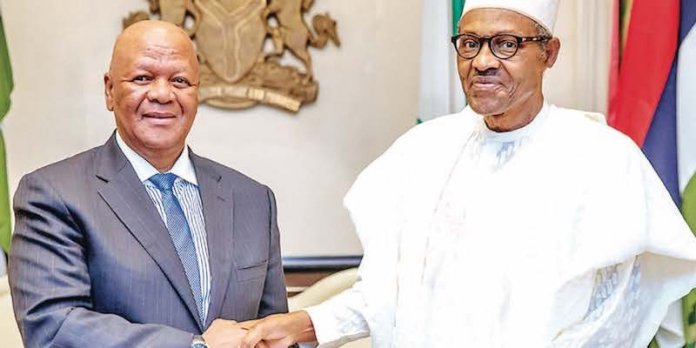 South Africa yesterday toed the path of rapprochement as it apologised to Nigeria over the killings of its nationals in xenophobic attacks in the rainbow nation.

South Africa’s President, Mr. Cyril Ramaphosa, tendered his country’s apology to Nigeria in Abuja, two weeks after the deadly xenophobic attacks, which forced Nigeria to evacuate some of its citizens.

Buhari, who welcomed the apology, promised a more robust relationship with South Africa.
Special Adviser to the South African President on International Relations, Mr. Khulu Mbatha, accompanied Radebe to the State House to tender the apology.

Radebe’s visit came a week after Nigeria’s Special Envoy, Mr. Ahmed Abubakar, returned to the country from South Africa, where he had met with Ramaphosa to convey Nigeria’s demands to the rainbow nation, including an urgent need to stop the xenophobic attacks and protect Nigerians in South Africa as provided for in various international treaties.

South Africa’s apology came on the same day former president, Chief Olusegun Obasanjo, broke his silence on the xenophobic attacks by South Africans on other fellow Africans, describing the incident as a great disservice to Africa and the black race. He also demanded genuine reconciliation and apology from South Africa.

However, despite the apology, Nigeria is not breaking its evacuation of its nationals in South Africa as the airline in charge of the operation, Air Peace, confirmed that it would bring in the second batch of 320 Nigerians from South Africa tomorrow.

Briefing journalists after the meeting, Radebe, who said the law enforcement agencies had apprehended 50 suspected attackers so far, said Ramaphosa had sent him and Mbatha to formally convey his apology to Buhari.

According to him, the president recalled fond memories that both Nigeria and South Africa shared and expressed hopes that both countries would continue to enjoy a robust relationship.

He added that the violence by South Africans against foreign nationals was antithetical to the country’s value system and its constitutional democracy.
He said: “We met a short while ago with His Excellency, President Buhari, the President of the Federal Republic of Nigeria to convey our President Ramaphosa’s sincere apologies about the incident that have recently transpired in South Africa. Those incidents do not represent what we stand for as a constitutional democracy in South Africa and the president has apologised for these incidents.

“He has also instructed law enforcement agencies to leave no stone unturned that all those involved must be brought to book, so that the rule of law must prevail in South Africa. He also conveyed his fond memories of ensuring that both Nigeria and South Africa must continue to play a critical role in the rebuilding of Africa to attain the agenda 2063 in the Africa that we want.”

He also said Ramaphosa recalled the historical times shared by Nigeria and South Africa when the former stood by the latter in the dark days of apartheid, recalling how some past Nigerian leaders such as Gen. Murtala Muhammed had joined forces with his country against apartheid.

Radebe quoted Ramaphosa as saying that the attacks were a wake up call on African leaders to fight poverty, reiterating his invitation to Buhari for a meeting on October 3 in South Africa, so they could address burning issues.

He added that the president’s decision to dispatch him and his special adviser to Nigeria was borne out of his belief that Nigeria and South Africa share a common agenda. .
Radebe said xenophobia, which has been happening in the country in the past 10 years, was traceable to economic hardship and prevalent unemployment in South Africa.

In a statement later yesterday, Buhari’s Special Adviser on Media and Publicity, Mr. Femi Adesina, said during the meeting, the president recalled roles played by Nigeria in engendering majority rule in South Africa, which led to the end of the apartheid segregationist policy.

“Going back to historical antecedents, we made great sacrifices for South Africa to become a free state. I was a junior officer to Gen. Murtala Muhammad and Gen. Olusegun Obasanjo. They were not operating in a democracy, but they got Nigerians to support them in the bid to see a free South Africa.

“Our leadership was quite committed to the cause. We made sacrifices, which younger people of today may not know. During my last visit to South Africa with the late President Robert Mugabe, it was very emotional, as Mugabe spoke about Nigeria’s contribution to free South Africa,” the statement quoted the president as saying.

Adesina added that Buhari thanked Ramaphosa, through the special envoy, “for coming to explain to us what happened in South Africa recently, leading to killing and displacement of foreigners,” adding that “President Buhari responded to profuse apologies from the South African president, pledging that relationship between the two countries ‘will be solidified,’ while describing the xenophobic attacks as ‘very unfortunate.’

He added: “The special envoy disclosed that 10 people died during the attacks – two Zimbabweans and eight South Africans. He said there was no Nigerian casualty.”

Meanwhile, Obasanjo yesterday broke silence on the xenophobic attacks by South Africans on other fellow Africans, describing the unfortunate incident as a great disservice to the whole of Africa and black race.

He charged South African authorities to embark on genuine fence-mending, reconciliation and wound-binding with countries whose citizens have been victims of xenophobia.
He also warned against reprisals and repatriation of Nigerians from South Africa, saying it would not solve the matter.

Obasanjo’s suggestions were contained in a reply to a September 11 letter by the President of the Inkatha Freedom Party, Prince Mangosuthu Buthelezi, to the former president on xenophobia in South Africa.

He said: “As a suggestion, South Africa should send emissaries to the countries concerned to explain, apologise and agree on the way forward for mutual understanding, accommodation, reconciliation, and binding the wound to promote unity, concord, and brotherhood in Africa. Repatriation of Nigerians from South Africa is obviously not a permanent solution. At best it is palliative.

“But the hurt will still remain for some time. Neither is revenge a desirable solution. Mutual understanding and acknowledgement of what needs to be done on all sides is imperative and getting down to doing them is the solution that will serve Nigeria and South Africa and indeed Africa well particularly in this era of Africa Continental Free Trade Area opportunities. Nigeria and South Africa must stand together to champion African cause and to jointly shepherd African development, unity, cooperation, security, and progress to make the 21st Century Africa’s century.

“The xenophobia or Afrophobia going on in South Africa is an unfortunate issue for South Africa and for the whole of Africa. It is unfortunate in many respects. There are only two countries in Africa that have ‘Africa’ as part of their names: Central Africa Republic and Republic of South Africa.

The former president said Africans living in another part of Africa should be treated as brothers and friends.

H described as “condemnable and not acceptable in any civilised society” a situation where the South African police “would stand aloof watching miscreants and criminals committing crimes against fellow human beings,” adding that “this was experienced in South Africa in recent times and it shows either incompetence or collusion on the part of the police.”

He, however, said if South Africa fails to pacify affected victims and work for reconciliation with the countries concerned to end xenophobia, “the concerned countries of the victims should come together to table appropriate motions at the African Union (AU) level first and consider other measures if the situation is allowed to continue.”

Also yesterday, Air Peace confirmed that it would evacuate the second batch of Nigerians from South Africa tomorrow.
The airline said the flight to Johannesburg would leave today by 1.00 a.m. Nigerian time and arrive back in Nigeria by 7.00p.m. the same day.
The Chairman and CEO of Air Peace, Allen Onyema, said South African authorities wanted the flight to take off in the afternoon because morning period is usually hectic at the airport.

According to him, out of over 600 Nigerians that are willing to come, 360 of them have been cleared for the evacuation but the airline would airlift 320 in the second batch, which is the capacity of the aircraft, Boeing 777 that would be deployed for the flight.

He spoke just as the federal government revealed that both Ogun and Imo states have the highest number of returnees evacuated from South Africa last week.
The Chairman/CEO, Nigerians in Diaspora Commission, Hon. Abike Dabiri-Erewa told reporters that after profiling of the 187 already in the country according to states, Ogun State has the highest number with 30 followed by Imo with 28.

Abia has seven; Anambra,13; Edo, 13; Ekiti, six; Enugu, seven; Lagos, seven; Kogi, one; Benue, one; Osun, six; Oyo, 23; Delta,15; Anambra,13 and Ebonyi, two.
Dabiri-Erewa said it was the responsibility of the governors to integrate and empower Nigerians who are being evacuated from South Africa.