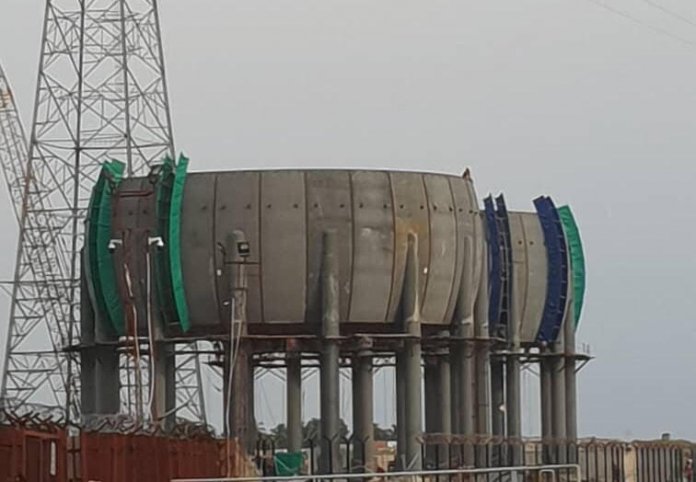 Following the ongoing gas depot project by Techno Oil Ltd at Kirikiri Town, members of the stakeholders’ association have decried the construction on the grounds that it is capable of sinking the entire coastal community, which is already on the edge of a precipice with the presence of numerous tank farms and bonded container depots, Chris Asika reports

For some years now, Kirikiri Town, a coastal community in Oriade Local Council Development Area (LCDA) of Lagos State has been in the news for all the wrong reasons. Is it the activities of petroleum tank farms that load petroleum products both day and night, or articulated trucks ferrying containers from various bonded terminals all struggling to find their way in and out of the

Private cars and commercial motorcyclists, popularly called ‘Okada’ have no choice but to sandwich between the trucks, on what is left of the road in a town bedeviled with bumps, potholes, bad drainages and stagnant water.

According to the association, the situation cannot be helped because of the struggle for control of the community by a group of persons who, over the years for seeming selfish reasons, parade themselves as heads of the community especially one with questionable character (namewithheld), who parades himself as the owner of Kirikiri. The community revealed that he partnered some self-acclaimed elders to sideline the Baale of Kirikiri to deceive the public and government functionaries on the activities of these oil tank farm owners and manufacturing concerns for personal aggrandisement.

Their activities have kept relevant government agencies in the dark of all the dangers the community is prone to, thereby making the town to sit on a keg of gun power should there be any incident of fire, since the only entrance and exit are bedeviled with total gridlock. They further lamented that anyone that challenges him is punished with malicious blackmail and endless court cases that leads them to prison. They noted that it is on record that the Baale and his chiefs were once victims, to mention a few members of the community that have suffered the same fate.

Meanwhile, fire incidents from petroleum tanker drivers have been recorded in 2010, 2012 and 2016, which kept the community in turmoil with casualties because of the inaccessibility of the roads. Among the three fire incidents, the 2016 incident recorded more casualties, as five cars and two trucks were gutted by the inferno; three lives were lost with numerous shops and shanties from NIMASA Roundabout to the front of KirikiriPrisons fence.

Property owners and residents in the busy area have continued to lament, calling on the state and federal governments to save them from the trauma.

It was said that during an inspection by representatives of theDepartment of Petroleum Resources (DPR) and Federal Ministry of Environment (FMOE), they were taken through the waterways and in their report they mentioned not sighting any residential building around the water ways and therefore certified Techno Oil to begin the gas project.

Therefore in a bid to sensitise the public on the activities of this group of self-acclaimed elders, the Kirikiri Town Stakeholders’ Association (KTSHA), which comprises individuals who own both residential and commercial buildings, kicked against it by writing a petition against the gas project through their lawyer, Chief EbohOtokhina, the Principal Partner, E.A Otokhina and Co law firm to relevant authorities citing the dangers the community is already facing with the presence of the oil tank farms and bonded container terminal, adding that gas is even worse because it is air borne. Meanwhile Techno Oil had already obtained operations licence and approval from DPR and FMOE.

Otokhina in his capacity as legal counsel to KTSHA described the act of Techno Oil as an abuse to the rule of law citing the process of the Environmental Impact Assessment Act before necessary approval should be given by FMOE.

“For you to get approval from FMOE, the organisations embarking on a building project must first publish a public notice advertisement of the said project on national dailies with FMOE guidelines, which takes 90 days to generate public opinion as regards the environmental impact assessment of the activity of the project in the host community before necessary approvals should be given. If things were done properly, both petroleum and gas depots cannot co-exist and part of the major worry is that the on-going gas depot project exists below an electric high tension wire mast. I have nothing personal; my concern is that it is a catastrophic disaster waiting to happen.”

On his part, the former Commissioner forEnvironment, Mr. Babatunde Durosimi-Etti responded by calling for a meeting with the two factions of the community, which held in November 2018 to see a possible resolution. The meeting was well attended by government functionaries, including members of the Lagos State Ministry of Environment (LMOE); Lagos State Fire Service (LSFS); Ministry of Physical Planning (MOPP); members of the KTSHA;representatives of Techno Oil and members of the self-acclaimed Kirikiri Elders Forum (all adorned with royal regalia and jewelleries meant for deceit).

In his opening remarks, the commissioner said: “We have listened to the petition from the members of the community but I implore you not to get excited because we will not listen to one side. We are going to work with the various institutions of government located in that vicinity, which includes the Nigerian Navy, the Nigerian Prisons, Nigerian Ports Authorities (NPA),NIMASA and so on.

“We will go on a site visit to the naval base and check the distance of the gas plant to the naval base and look at the implication. We need to follow the law and if the law says don’t put it there, we will do so. We will be as transparent as possible. We have told Techno to stop work because we have to talk to the representatives of the community because we are supposed to be seen as independent. We will call for a meeting before Christmas.”

On his part, the Permanent Secretary of the Lagos State Ministry of Environment, Mr. AbiodunBamboye said in adherence to the environmental and social impact assessment, all efforts will be made to ensure that the standard set by government will be strictly adhered to.

In his address, he stated that since DPR and EkoElectric have given approval and even the Ministry of Physical Planning has received payments making inferences drawn from documents presented by Techno Oil and recommendations made by LASEMA, the stop work order issued earlier by the commissioner was lifted though stating that the existence of the petroleum depots in the area is still on slippery grounds because all depots did not pass due diligence test.

He advised Techno Oil to liaise with the two factions of the community for resolution within a week after that meeting. But till date, no meeting held; no news from Alausa and to make matters worse, the gas project is near completion, over 80 per cent.

In a chat with THISDAY, the KTSHA called on the federal government and the public to help stop the gas project, stating the dangers involved. “We the KTSHA stand against this gas project by Techno Oil, we have never supported it and will never support it because of the dangers involved, because gas is air borne. Bringing the gas depot was made possible because of the selfish interest of some people who went to form elders’ forum with the man that said he is the owner of Kirikiri. He is benefiting directly from the proceeds.

“After all said and done, no meeting was rescheduled by the ministry of environment as promised for December last year and we are almost in the last quarter of 2019. Techno Oil is one of the oil companies in Kirikiri that does not adhere to safety. They were responsible for the fire incidents that occurred in 2010 and 2012 as a result of their disregard for environmental safety in their operations. Adding a gas depot will be a total disaster.”

The group added: “It is on record that all the other depots in the past have employed traffic officers except Techno Oil. The Lagos State Ministry of Environment has refused to call back for the meeting scheduled for December last year. We have every reason to believe the authorities have been compromised. We are also aware that those deceitful elders have sworn an affidavit stating that the community is in support of the project.

“Please we implore the public to disregard such as we have a counter affidavit filed with this report stating that we are not in support. Finally, our Baale is not interested in this matter, besides he is incapacitated, even during our last discussion with the secretary in attendance, we were told he said he is not in support.”

Reacting to the allegations, in a meeting with KTSHA and Kirikiri Depot Owners Association (KTDOA) at DPR Ikoyi and LASEMA Alausa last year, Obi reiterated the company’s commitment to curb the effect of the gas depot to residents and stakeholders. This she said through the company’s Group Managing Director Mr. Anthony Onyema and the company’s secretary/corporate attorney, Mr. Kenneth Abazie.

“As a company, we are aware of the need for adherence to the international standard for Health Safety and Environment (HSE) compliance and as such we are ready to buy houses around the vicinity of the on-going gas project so as to meet the two meters gap as required by FMOE and also create new access roads to ameliorate the bad situation. There is a caveat emptor to that effect.”

Again, just this week, in their reaction to one of the major dailies (not THISDAY) the company said: “The management of Techno Oil Limited has said that its gas plant situated in Kirikiri, in the Oriade Local Council Development Area of Lagos State fully complied with requisite safety procedures in the oil and gas industry.”
Refuting the claim, the General Manager, Commercials/Company Secretary, Techno Oil, Ken Abazie, said the company obtained the relevant regulatory approvals for the gas plant, adding that it strictly adheres to the statutory regulations of the industry with regard to the project.
Abazie also said the company doesn’t have any issue with the community, its residents or the regulatory bodies issuing approvals for the project, stating the company’s willingness to provide the documents to back up its claims.

MATTHEW HASSAN KUKAH – NOT A STRAND OF HIS HAIR