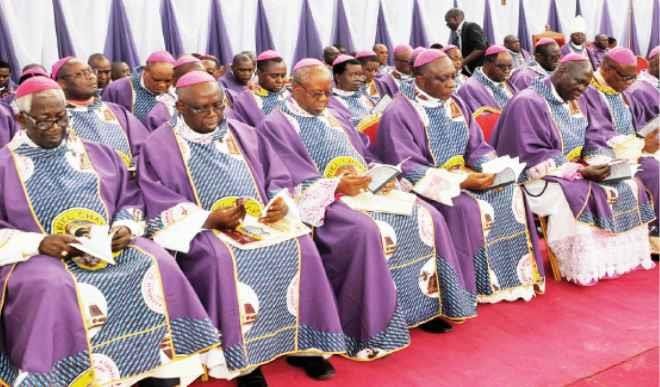 The Catholic Bishops Conference of Nigeria (CBCN) has urged the federal government to further strengthen the peace and security of the country.

CBCN President, Most. Rev. Augustine Akubeze, said this yesterday during the opening ceremony of the second plenary of CBCN at the Sacred Heart College Hall in Abeokuta.

Earlier in the day, the bishops were joined by Catholic lay faithful, priests and leaders of other Christian denominations at the opening mass for the plenary meeting held at Saints Peter and Paul Catholic Cathedral, Itesi Abeokuta.

The conference, which converged the presence of all Catholic bishops in Nigeria, addressed the state of the nation among other pertinent issues affecting the Catholic Church and the country at large.

Akubeze said that it remained the duty of the government to protect the constitutional rights of its citizens and also ensure peace and effective security.

He said that adequate security of lives and property would bring about peace and would eventually lead to sustainable development.

Akubuze also the  Catholic Archbishop of Benin Archdiocese condemned the recent killings of some Catholic priests  in some parts of the country.

“As missionaries, we must be harbingers of justice and peace in our land.

“We are just interested in living our lives peacefully without any fear of being kidnapped for ransom or being driven from our home land.

“Every government that fails to protect the constitutional rights of her citizens has failed. The leaders of a country should ensure peace and security of his people,” he said.

Eromosele said that she  had spent no less than 1,980 days in the custody of  Boko Haram, and urged the Bishops to keep her matter  and others abducted alive.

Eromosele appealed to the Catholic clerics to urge the Federal Government to do all that is possible to ensure their release without further delay.

In his remarks, Governor Dapo Abiodun of Ogun State lauded the Catholic Church for contributing to the development of the state and  the country at large.

He called on the church to continue to pray for the peace and unity of the country.

He  added that the present administration under President Muhammadu Buhari would not disappoint Nigerians by fulfilling his electioneering.

Also,  Prof. Pat Utomi, Mr Jimi Agbaje, and the Alake of Egba Land,  Oba  Adedotun Gbadebo were among the dignitaries at both the mass and the opening ceremony.